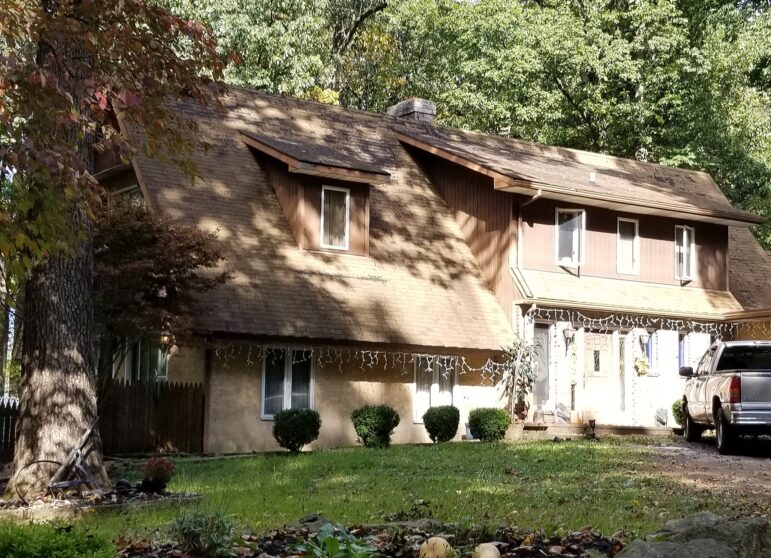 When officers from the Bethlehem Police Department and members of the Northampton County Drug Task Force served a search warrant on this home on Silver Creek Road early Monday morning, they say James Michael Hero, 47, resisted arrest and attempted to disarm a law enforcement officer. Police said they recovered methamphetamine, psychedelic mushrooms and packaging materials inside the home, which is located in a wooded, upper middle class neighbhorhood near Hellertown.

The execution of a search warrant at a suspected meth house in Lower Saucon Township earlier this week was not without an incident that could have endangered the lives of law enforcement officers, according to Bethlehem Police and members of the Northampton County Drug Task Force. Both agencies were responsible for carrying out the operation.

In a criminal complaint filed in Northampton County District Court 03-2-04, a drug task force member detailed what allegedly happened when the Bethlehem Police Department’s Emergency Response Unit served the warrant at 6:05 a.m. Monday at 2291 Silver Creek Road, a home in a wooded neighborhood less than a mile from Hellertown borough and approximately half a mile from the Saucon Valley School District campus.

At that time, the task force member said, a Bethlehem police officer encountered James Michael Hero, 47, in the home’s living room area “and began giving (him) instructions to lay on the ground.”

According to the criminal complaint, Hero “refused” to follow the officer’s instructions and was instead forced to the ground, where his body became rigid.

A struggle ensued as the officer attempted to handcuff Hero and “at one point during this struggle (Hero) grabbed and held onto the forend of (the officer’s) rifle,” the complaint says. “At least three officers were required to use force to break (Hero’s) grip on the rifle and then ultimately take him into custody.”

During a search of the home, police said they found 13 bags “containing a crystal-like substance,” a plastic bag containing suspected Psilocybin mushrooms, packaging materials, digital scales and $458 in cash.

The drug task force member said in the criminal complaint filed against Hero that the estimated combined weight of the methamphetamine recovered from the home was 75 grams, and that its street value was estimated at $3,400.

According to the criminal complaint and court records, Hero is charged with disarming a law enforcement officer (Felony 3), resisting arrest (Misdemeanor 2) and misdemeanor counts of possession of drug paraphernalia and possession of a controlled substance.

A female resident of the house is also charged in connection with the raid, court papers indicated.

Following preliminary arraignments before District Judge Alan Mege Monday, Lorah and Hero were each committed to Northampton County Prison in lieu of $50,000 bail, and according to online court records as of Wednesday afternoon neither had posted it.

Preliminary hearings for both Hero and Lorah are scheduled to be held before Mege on Thursday, Oct. 15 at 9 a.m. in District Court o3-2-04.

Hero has two March 2012 felony convictions to his name, one for manufacture, delivery or possession with intent to manufacture or deliver drugs and the other for manufacturing methamphetamine in the presence of a child.

Those convictions resulted from charges filed when police raided Hero’s third floor apartment in the 500 block of Main Street in Hellertown and uncovered a meth lab there in 2011.

A woman identified as Hero’s common-law wife at the time, Colleen Kelly Yob, was also charged and later convicted in connection with the downtown meth lab, which police said was operated in the presence of their son, who was 10 years old at the time.

Hero originally faced nearly 30 charges in that case. All but the two charges to which he ultimately pleaded guilty were withdrawn as part of a plea deal, according to court records.

He was released from prison in December 2016, records show.

In the 2012 Northampton County case, Hero was represented by a public defender, according to court records.

Records pertaining to the charges filed this week do not identify legal representation for either Hero or Lorah.

The home on Silver Creek Road isn’t owned by either Hero or Lorah, according to Northampton County public property records.