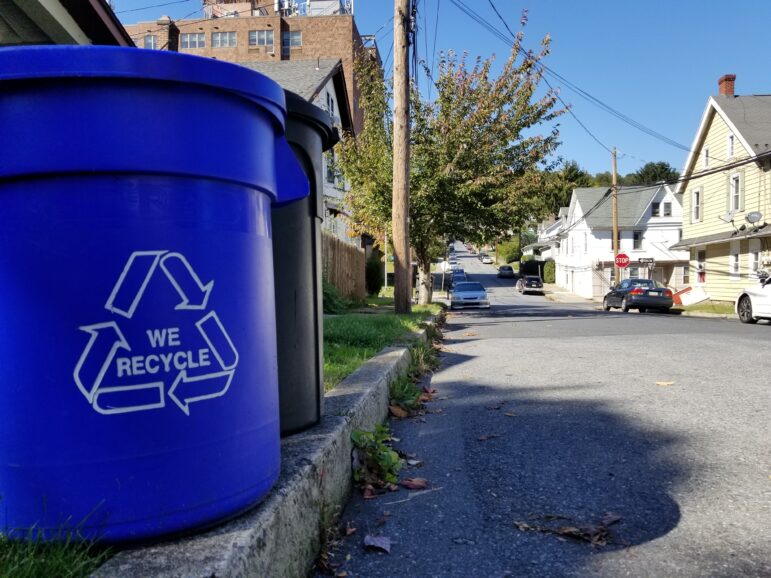 A recycling bin and trash can are placed curbside on N. Hoffert Street in Fountain Hill borough. In 2021 borough residents will pay more for fewer trash pickups, after borough council approved a new contract that costs more but provides less.

Residents of Fountain Hill borough will have to adjust to a revised trash pickup schedule that includes fewer pickups that will cost them more beginning in 2021.

The borough’s current trash and recycling contract expires at the end of 2020, Borough Council noted at their Oct. 5 meeting. Council spent more than 30 minutes at the meeting discussing new contract options, which included bids from two different providers.

Council ultimately approved a motion to award the trash and recycling hauling bid to Republic Services by a vote of 5-2. Republic’s three-year bid includes trash pickup once a week, with recycling being picked up once every other week (the current schedule for recycling pickup). The new contract may also result in a $50 to $60 per year increase in residents’ sanitation fee.

Council members noted that residents would be looking at an increase in their trash and recycling fee regardless of which bidder they selected, as prices have gone up since the expiring contract was negotiated. Borough Council discussed reducing trash pickup from twice a week to only once a week as a way of mitigating costs for residents.

“Even if we downgraded from two pickups a week to one pickup a week we would still be looking at a pretty substantial increase,” council member Will Rufe said.

The borough’s Finance Director, Cordula Voges, mentioned that a more diligent effort to collect resident sanitation fees could help offset any price increase presented by the new contract. However, council expressed concern over whether or not they could rely on such an effort.

“I don’t think we can expect bills to be paid any sooner than they’re being paid now. In fact I wouldn’t be surprised if we have more trouble collecting bills this coming year, and perhaps next year,” council member Doug Trotter said. “If we can in any way lessen the amount that a borough resident has to pay for anything, that would be the way to go.”

Fountain Hill borough offers an organized, borough-wide trash and recycling pickup program for its residents. The program has its pros and cons, and some borough residents who are unhappy with the costs believe they would be better served by selecting and paying for their own hauler, which is how it works in the neighboring City of Bethlehem.

Borough Council president Leo Atkinson reminded residents about some of the downsides of letting residents select their own haulers.

“Having individual haulers is quite a big inconvenience for residents. I hear it from people in Bethlehem all the time,” he said. “Having garbage trucks coming down their street every day of the week, not to mention just the wear and tear on our roads, which our residents pay for anyway when we have to reconstruct our roads.”

Rufe, who voted against the motion to accept Republic’s bid, cautioned council against moving too quickly on a decision and neglecting to gauge the response from borough residents. Mayor Carolee Gifford echoed Rufe’s concern.

“I think it would be prudent for us to have some sort of residential opinion on the matter,” Rufe said.

Atkinson countered by pointing out that Borough Council meetings are an adequate setting for residents to make their voices heard. Council member Jamie Johnson also noted that with budget discussions ramping up during the month of October council should take the opportunity to decide on a bid to help make budgeting decisions later in the month. Council member Annamarie Jordan also recommended that council come to a decision that night.

“I understand the sentiment, but I believe it is our job as council to make these decisions,” she said.

Fountain Hill budget talks will continue as the end of this fiscal year approaches.