The Southern Lehigh Public Library (SLPL) is at risk of having to operate on a tighter budget in 2021. According to the library board’s president, Bruce Eames, the library is facing a serious challenge from Lower Milford Township over next year’s funding.

Failure to reach a deal could result in the loss of more than $25,000, Eames said in a press release from earlier this month.

The funding controversy appears to be the result of Lower Milford Township being unhappy with SLPL’s ability to provide them with library usage statistics. According to the the library’s director, Lynnette Saeger, SLPL provides each of its funding municipalities with monthly board packets, which include statistics.

Saeger said providing some of the statistics Lower Milford officials want would violate privacy laws, while others have been impossible to obtain from the library’s computer system until recently.

The library was able to present the desired statistics, as well as more comprehensive budget analytics, when they delivered their yearly formal budget presentation at the Oct. 15 Lower Milford Township Board of Supervisors meeting.

Saeger said she hopes that providing the statistics will help Lower Milford officials decide to continue funding the library in 2021.

“We don’t know that it completely satisfies their needs, but at least we were able to get them the statistics, which they were grateful for,” she said.

The library also relies on funding from Upper Saucon Township and Coopersburg Borough. Fortunately, Saeger said she sees nothing to indicate that funding from the other municipalities will be threatened during 2021 budget discussions.

“We’ve done budget presentations to all three of them now, and we have no reason to believe that the other two are not going to fund us,” Saeger said. “They’ve not made any similar threats; in fact they were very positive when we made our presentations, so we’re very hopeful about that.”

Saeger said the library was previously encouraging residents to attend Lower Milford Township Board of Supervisor meetings to voice their concern, however the township no longer provides Zoom access to the meetings and in-person attendance is limited to 25 people.

“We would like people to attend the meetings, but we can’t guarantee there will be space,” she said.

Instead, the library is encouraging people to reach out to the township to voice their support for the library. Lower Milford Township has a contact page, which can be used to leave a message with township officials.

Residents may also reach out to Ryan Fields, who serves as Lower Milford’s appointee on the SLPL Board of Directors. Fields can be reached at LIBRARY.LMT@PROTONMAIL.COM.

Saeger said the library is currently in an ongoing process of devising its own budget for next year, so the direct effects of losing Lower Milford’s funding are not yet known. However, she said the loss of funding will certainly cause the library to have to make budget cuts in a few areas.

“We would definitely have to cut programming, and that could mean anything from completely to partial,” she said. “I would hate to cut all programming, but we definitely would not be able to afford to provide staffing to conduct those programs at the same level that we are now.”

The loss of funding would also affect what the library purchases for its collections, including both physical and digital resources. This would have a large effect on the library community, especially since electronic resources have become much more popular during the COVID-19 pandemic. 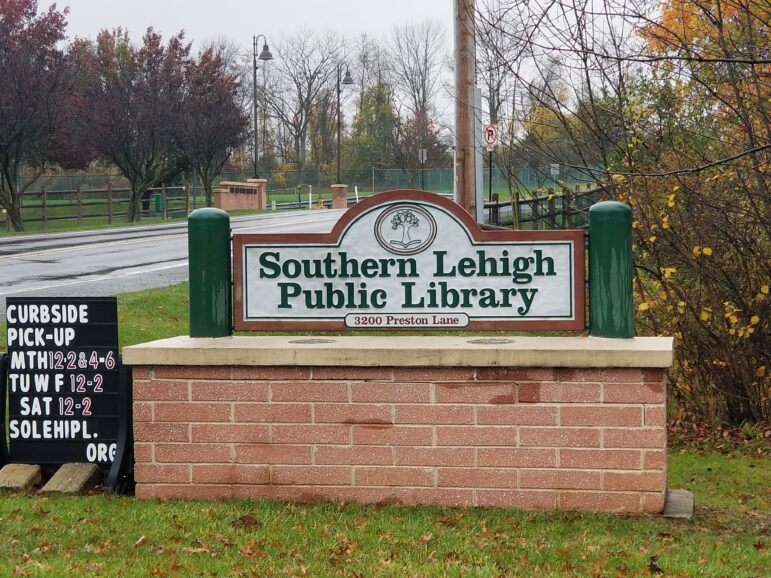 Saeger also said the library may have to cut its hours and reduce staff if they lose Lower Milford’s funding.

The loss of Lower Milford’s funding would be another blow to the Southern Lehigh Public Library, which is already anticipating a decrease in funding from the Commonwealth of Pennsylvania, although the extent of defunding from the state is still unknown.

“It’s in the hands of the legislature right now, and we don’t have any hard and fast figures on that,” Saeger said.

The library has been hard at work adapting its services for much of this year in order to keep its doors open and continue serving the community amid the COVID-19 pandemic.

“The Board of Directors applied for and received a Paycheck Protection Program grant through the Small Business Administration that kept the staff employed and working from their home computers,” Eames said.

Eames continued, saying that the library shifted its programming for all ages online. The library also reallocated funds to purchase more downloadable and streaming content for its members to access and enjoy.

The library also made changes to their operations to comply with COVID mitigation efforts.

“We added curbside pick-up service, allowed more renewals, forgave overdue fines and will continue to do so through Dec. 31, installed a protective shield at the circulation desk, hired additional cleaning services and required our staff and patrons to follow all CDC and PA Department of Health guidelines to ensure everyone’s safety,” Eames said.

The library will continue to devise the 2021 budget to the best of its abilities as it awaits a funding decision from Lower Milford Township. Lower Milford’s next Board of Supervisors meeting is scheduled for Thursday, Nov. 5.

Efforts to reach officials from Lower Milford Township for comment have been unsuccessful at the time of publishing.