Officials from Bucks County and beyond along with many others who helped with the planning and construction of the new Upper Bucks Rail Trail cut the ribbon on the 3.2 mile recreational pathway at a ceremony held Thursday at the Shelly Road trailhead. The brand new trail extends from the Lehigh-Bucks County line south to Veterans Park in Richland Township.

Marking the culmination of more than a year of construction, the new Upper Bucks Rail Trail officially opened at a ribbon-cutting ceremony Thursday at the Shelly Road trailhead near Rt. 309 in Richland Township.

The new trail is 12 feet wide and 3.2 miles long, and extends from the Lehigh-Bucks County line through Springfield Township to Veterans Park on E. Pumping Station Road.

Much of the trail is paved, but part of it is a boardwalk, and all of it is accessible to differently-abled individuals in accordance with the Americans with Disabilities Act.

For Saucon Valley residents, the opening of the Upper Bucks Rail Trail means they now have the option of hiking, jogging or biking further south than ever before. That’s because the new trail picks up where the 7.5 mile Saucon Rail Trail leaves off, in Coopersburg.

“This project improves the quality of life for me and my family,” said Upper Bucks Chamber of Commerce Executive Director Danielle Bodnar at the ceremony. 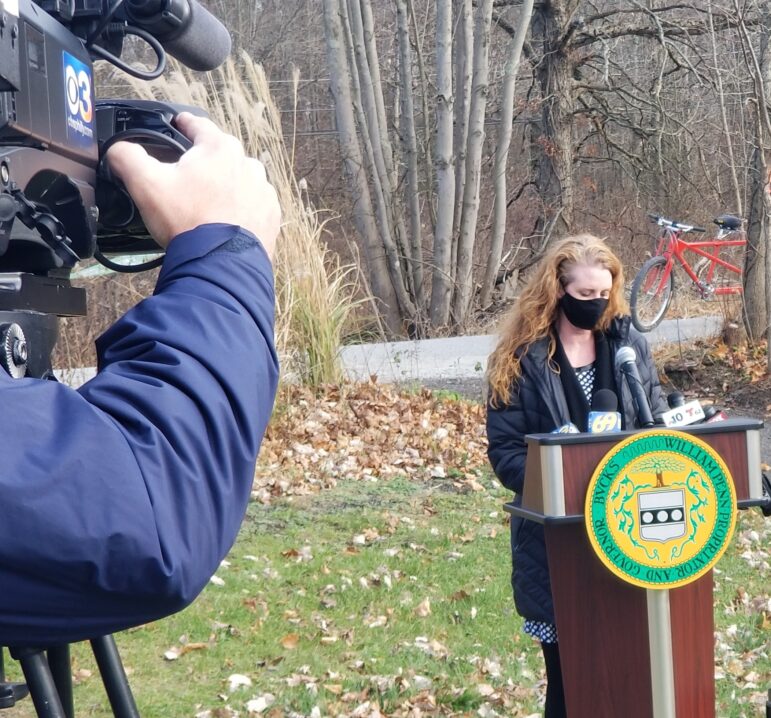 Bodnar noted that the opening of the trail will not only improve access to recreation in the area, but it will also help stimulate the local economy.

In addition to county officials, local officials from both Springfield and Richland townships worked together on the trail’s planning and construction. Both townships will assist with trail maintenance.

Richland Township Parks and Recreation Board Chairman Tom Marino noted proudly that the township has come a long way in terms of improving pedestrian access over the past 13 years.

It was back in 2007, he said, that he wanted to take his children to a local Dairy Queen for ice cream and discovered that “it couldn’t be done” on foot.

That realization prompted him to get involved, and today the township is “one of the only walkable communities in rural Bucks County,” Marino said. 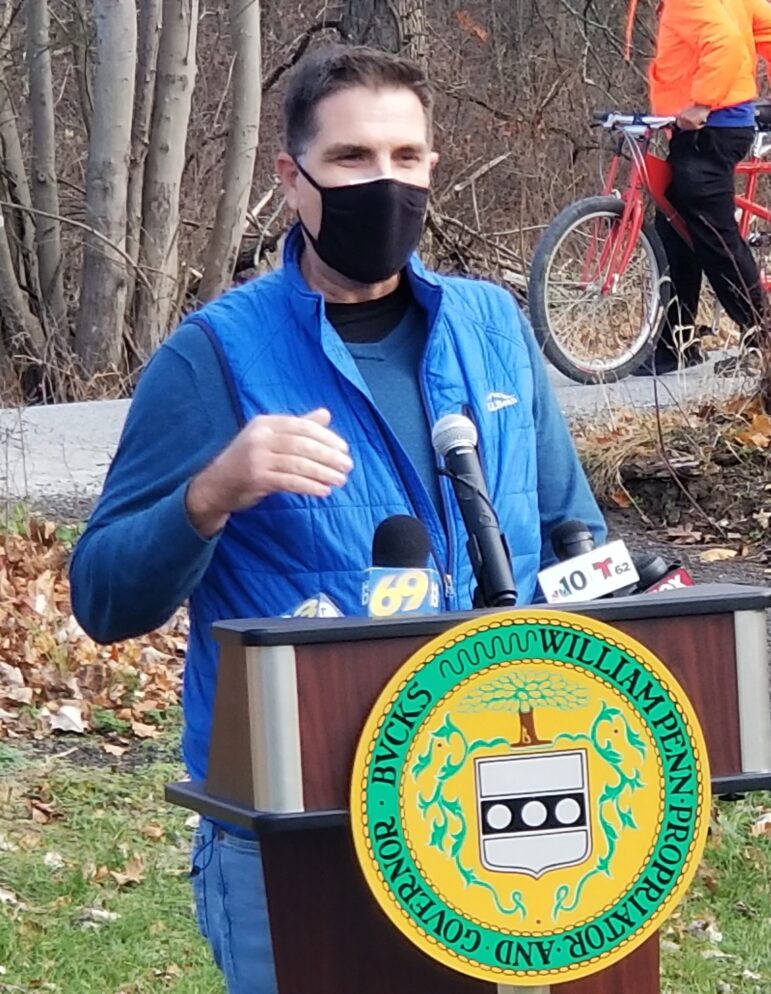 As if the opening of the trail wasn’t exciting enough, it was also announced at the ceremony that the Southeastern Pennsylvania Transportation Authority (SEPTA) has agreed to enter negotiations for a right-of-way in order to extend the Upper Bucks Rail Trail two miles further south, into Quakertown borough.

With another new pathway–the Liberty Bell Trail–entering Quakertown from the opposite direction, the borough is poised to become an “epicenter of rail trails,” Marino said.

Assisting with the planning of the trail were members of the Saucon Rail Trail Oversight Commission, who hail from Hellertown borough, Lower Saucon Township, Upper Saucon Township and Coopersburg.

Frank Hollenbach, who serves on the Springfield Township Park & Land Preservation Board, said the commission’s willingness to help by answering questions proved invaluable to their friends in Upper Bucks County. 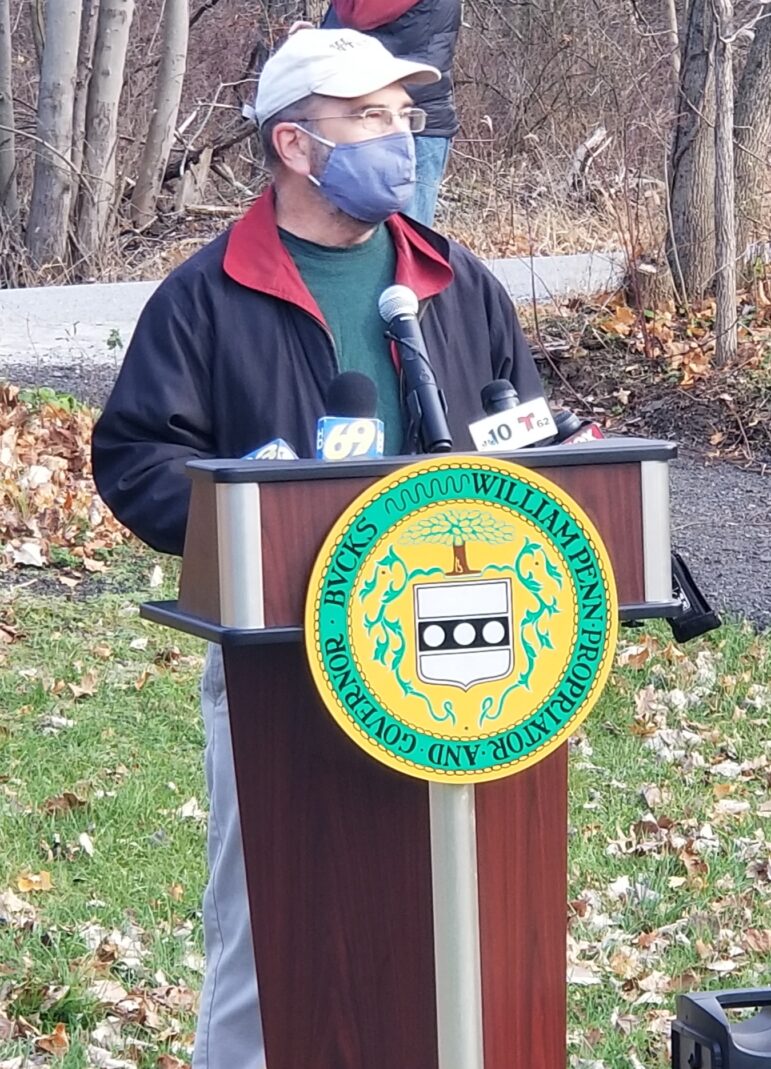 Frank Hollenbach, who serves on the Springfield Township Park & Land Preservation Board, praised the members of the Saucon Rail Trail Oversight Commission for their “extremely collaborative and cooperative spirit.” Members of the nine-year-old commission assisted their neighbors to the south as they planned the opening of the Upper Bucks Rail Trail.

The Appalachian Mountain Club also assisted with the project and donated the dog waste cleanup stations that are installed along the trail, which was designed by prominent Bucks County engineering firm Boucher & James and constructed by Monster Paving.

The Upper Bucks Rail Trail, in addition to linking up with the Saucon Rail Trail, is part of an 800-mile regional network of trails being developed known as the Circuit Trails. To date, approximately 350 miles of that trail network have been completed.

More information about the Upper Bucks Rail Trail can be found on the PA Highlands Trail Network website. 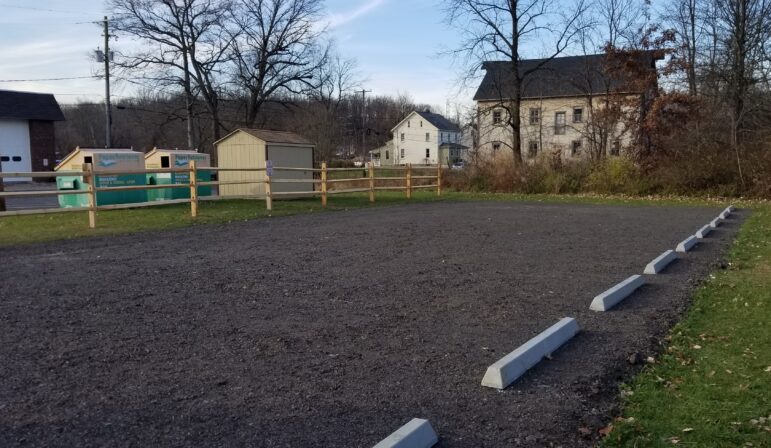 Visitor parking is available at a new trailhead across from Richland Township Fire & Rescue on Shelly Road, just off Rt. 309. 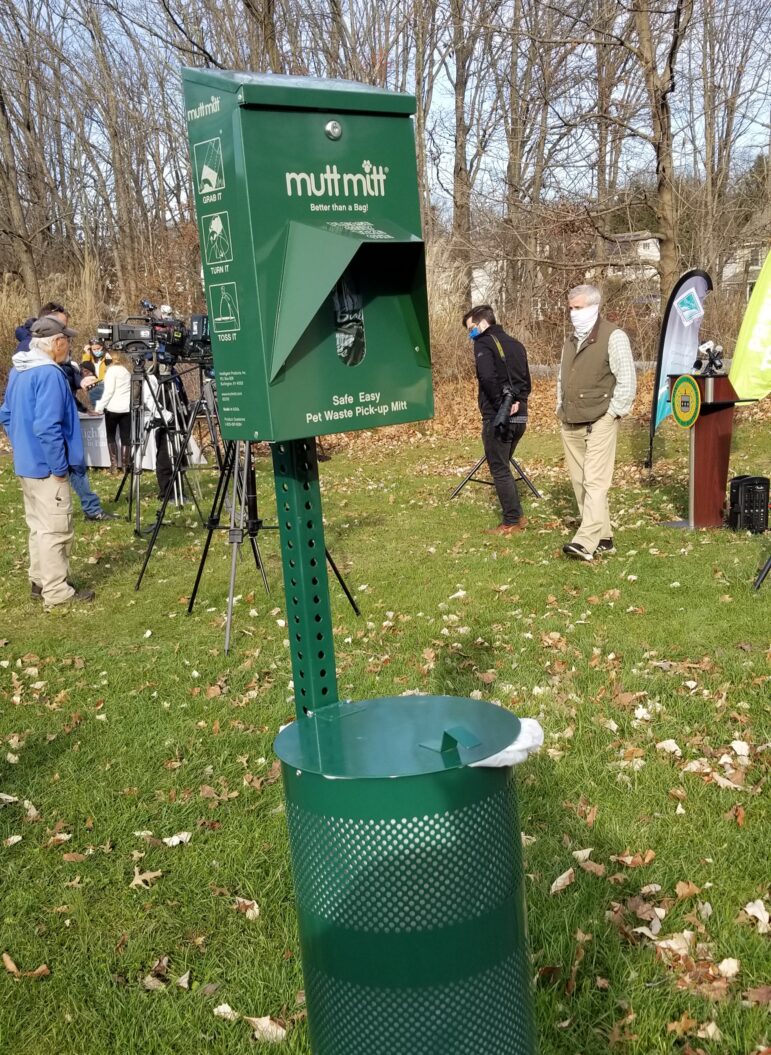 Officials who worked on the Upper Bucks Rail Trail project in various capacities jointly cut the ribbon to symbolically mark its opening Thursday. 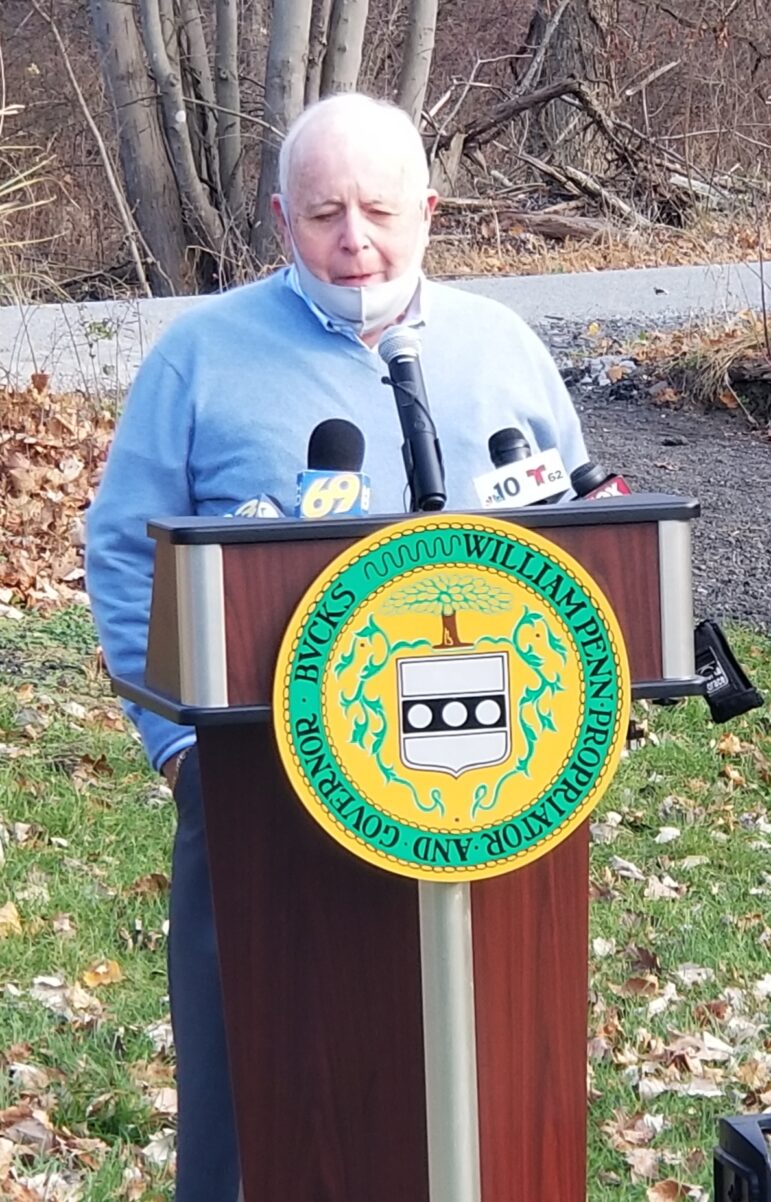 Former Bucks County Commissioner Charlie Martin speaks at the opening of the Upper Bucks Rail Trail in Richland Township Thursday. Martin, of Lower Southampton Township, said he is looking forward to the opening of the Newtown Trail near his home. 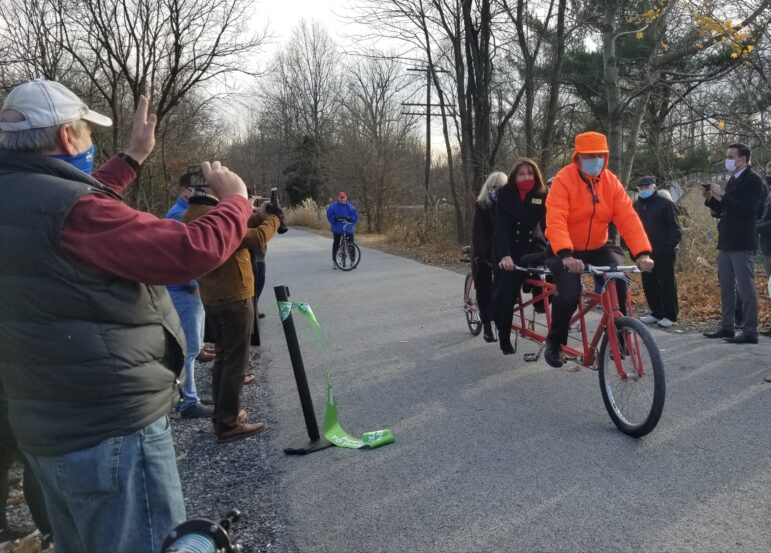 First to ride on the new trail was local bicycle enthusiast Bob Swaim, who offered several ribbon-cutting attendees a ride on his multi-seater. 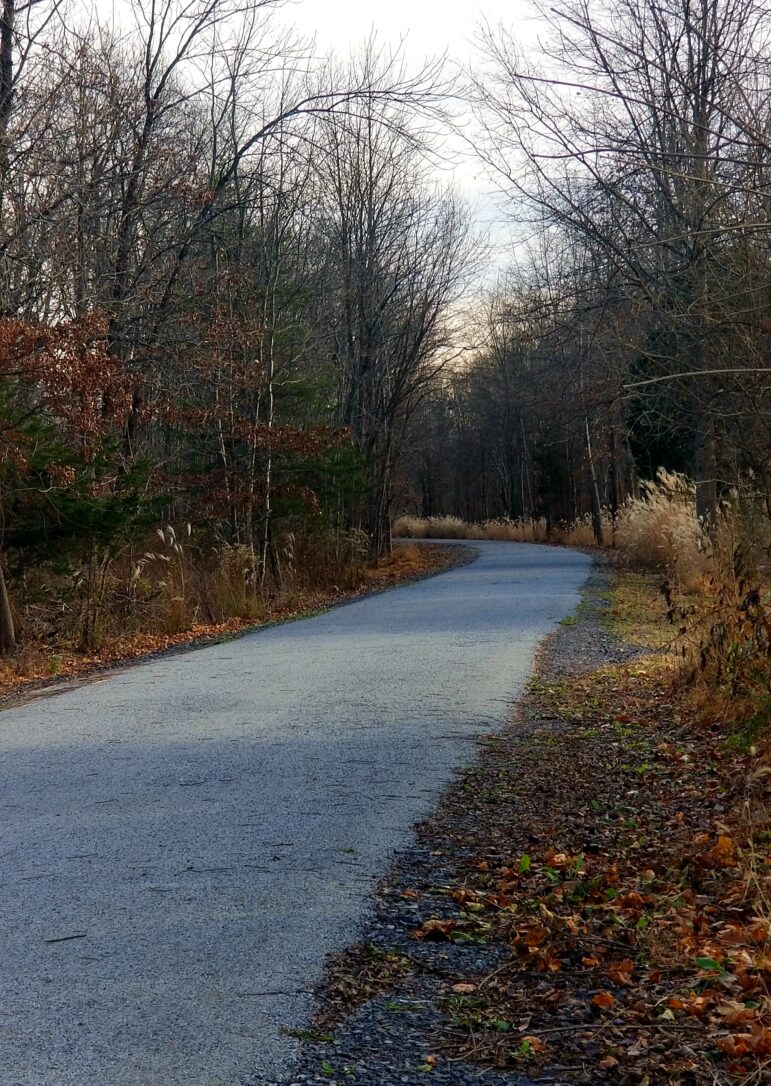 The new Upper Bucks Rail Trail is 12 feet wide and 3.2 miles long. It extends south from the Lehigh-Bucks County line to Veterans Park on E. Pumping Station Road in Richland Township. A 2-mile extension further south into Quakertown is planned, but will depend on the outcome of right-of-way negotiations with SEPTA, which owns the former rail line. 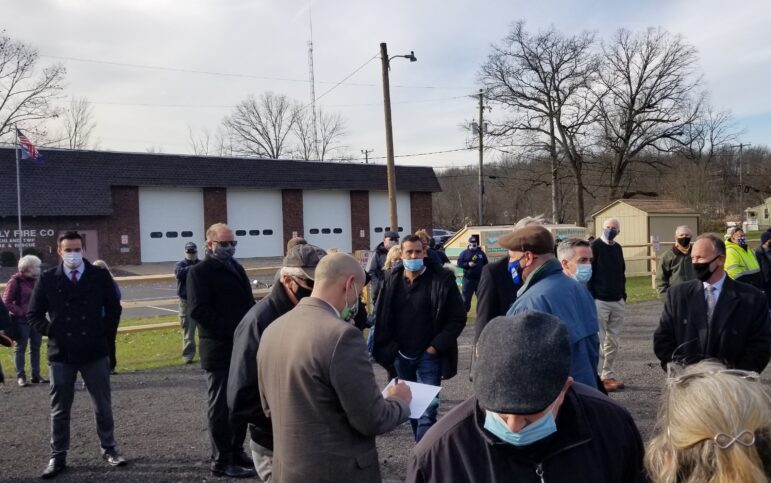 Dozens of county and local community and civic leaders attended the ribbon-cutting, which was held outside on an unseasonably chilly mid-November day. Attendees were required to wear face masks and maintain physical distancing due to regulations in place during the COVID-19 pandemic in Pennsylvania. 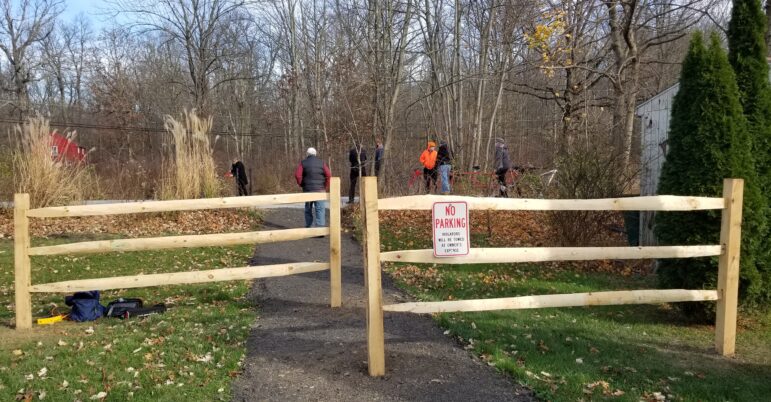 A chicane access point to the new rail trail is constructed of split beam fencing. 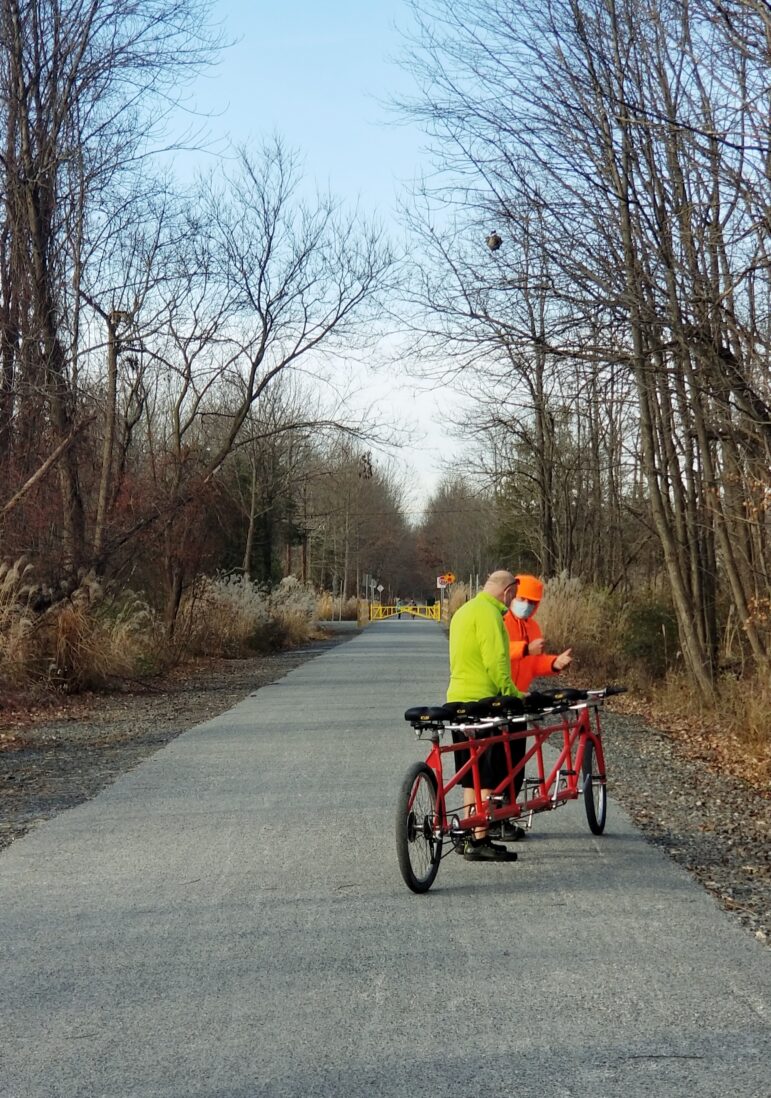 This view is looking north on the new Upper Bucks Rail Trail from the Richland Township trailhead on Shelly Road.