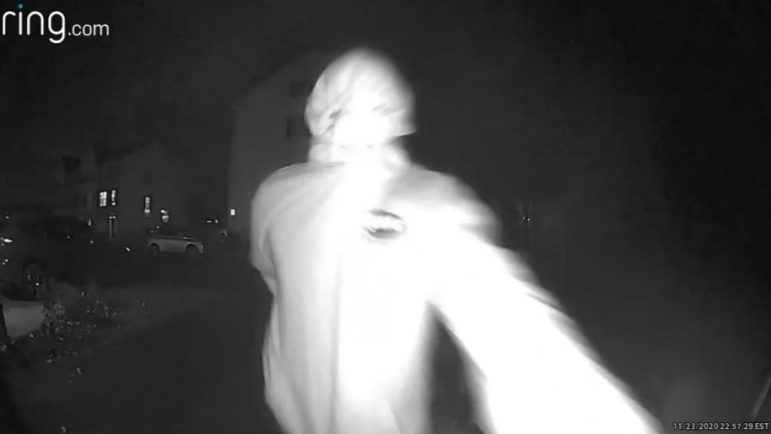 A video recorded by a Hellertown resident’s Ring doorbell security system is being shared because it appears to show an unidentified individual attempting to open a locked exterior door. Suspicious activity in the borough should be reported to Hellertown Police by calling 610-759-2200, which is the non-emergency line for the Northampton County dispatch center.

Residents of the Stonewood Lane townhouse development off Easton Road in Hellertown borough are circulating a video recorded by a Ring doorbell out of concern for the suspicious activity it appears to show.

The video being shared shows a hooded figure who appears to be a younger male walking swiftly up to the resident’s door and attempting to open it. The individual then retreats from the area of the front door, but can be seen lingering nearby moments later.

The video recorded Tuesday is accompanied by a warning that the “suspicious individual” is “looking to try and see if front doors are unlocked.”

Part of the person’s face is concealed by their clothing in the one-minute video, which has been shared on the Ring Neighbors app. Due to the person’s speed and the glare from exterior lighting it is difficult to make out identifying features in it.

Suspicious activity in the borough should be promptly reported to Hellertown Police, who can be reached by calling 610-759-2200.