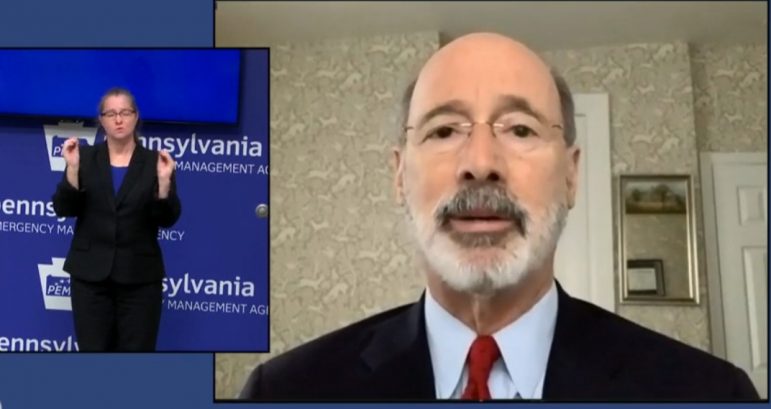 Credit: Office of the Governor of Pennsylvania/Facebook

In a press conference announcing new restrictions on businesses due to a recent surge in COVID-19 cases and hospitalizations, Pennsylvania Gov. Tom Wolf Thursday acknowledged that his decision to ban indoor dining during the holiday period will affect restaurants and bars at what is normally one of their busiest times of year.

If you have a Christmas or holiday party booked at a restaurant in Pennsylvania any time during the next few weeks, you’re going to have to reschedule it for some time in 2021.

Calling the situation “unfair, frustrating” and “terrible,” Pennsylvania Gov. Tom Wolf announced his decision to put many activities–including indoor dining–on pause for approximately three weeks to help stop the surge in coronavirus cases in the state.

Wolf said the three goals of the Limited-Time Mitigation Order he has signed are:

“This is a bridge,” Wolf said of the order, which was accompanied by one from Pennsylvania health secretary Dr. Rachel Levine. “These protective mitigation measures target high-risk activities.”

In addition to indoor dining and drinking, all extracurricular activities and athletic events in schools will be suspended until Jan. 4, with the exception of collegiate and pro sports.

The limit for indoor gatherings has been reduced to 10 people as part of the order, and outdoor gatherings will be limited to 50 people through the holiday period.

In addition to restaurants and bars, the order states that dining and sales of alcohol at breweries, wineries, distilleries, social clubs and private catered events are prohibited.

Although takeout and delivery services may continue, Wolf acknowledged that this prohibition on gatherings in restaurants and bars could hardly have come at a worse time for the state’s food service and entertainment industries.

Many businesses within those industries are struggling to keep their doors open due to an accumulation of financial losses that began with a statewide shutdown in the spring. Owners were thus counting on increases in sales over Christmas and New Year’s to help them weather the economic storm the pandemic has put them in.

“Unfortunately, COVID-19 thrives in places where people gather together…and these are the same conditions we find in restaurants and bars,” Wolf said, before encouraging Pennsylvanians to support the businesses by ordering food and drinks to go.

Outdoor dining may continue under Wolf’s new order, however with wintertime temperatures now the norm, many establishments have suspended al fresco operations.

Wolf cited his support for a federal relief package specifically targeted at restaurants, which he said is now stalled in Washington along with other stimulus talks in Congress.

“We need to make sure that these restaurant owners and their employees have the support they need,” Wolf said, noting that in spite of the pandemic’s “crushing” economic impact “the vast majority of restaurant and bar owners have been…highly conscientious throughout the entire pandemic.”

Even before Thursday’s order was announced, some restaurant and bar owners–including the owners of a Bethlehem brewery–said they plan to defy Wolf’s mitigation effort in order to survive. During the news conference a reporter asked him what they can expect in terms of enforcement if they follow through on their promises to remain open.

“We have the enforcement in place,” Wolf said, noting that state police, the Department of Agriculture and other state agencies are involved in enforcement efforts targeting COVID-19 mitigation compliance. “There will be the usual citations and fines.”

Other retail businesses that operate indoors may only operate at 50 percent capacity.

In-person religious services at churches, synagogues, temples, mosques and other places of indoor worship are specifically excluded from the limitations of the mitigation order, however it states that “these institutions are strongly encouraged to enforce physical distancing and other mitigation measures at their gatherings.”

“By working together to stop the spread over the next three weeks we will be saving lives, but we have to do it together,” Wolf said, adding that each person has a responsibility to help stop the spread of the disease he said is surging “worse than it was in the spring.”

The mitigation order also highlighted the state’s recently-issued Limited-Time Stay at Home Advisory, which Wolf said means avoiding gathering with people from outside one’s own household if possible, even during the holidays.

“When you’re not able to see members of your family, that’s not a small thing,” he acknowledged. “That’s a big thing.” But he encouraged Pennsylvanians to ask themselves if their visit with someone is absolutely necessary before following through and having in-person contact with a non-household member.

Returning to advice he has often shared throughout the pandemic, Wolf urged people to “wear a mask, keep your distance from others who don’t live in your household, avoid poorly ventilated spaces and wash your hands frequently.”

“The situation we’re in right now is dire,” he said. Levine substantiated that statement by pointing to modeling from the University of Washington she said is very “concerning” because it shows a significant increase in deaths from COVID-19 occurring by the spring.

“That is why the governor is acting now,” she said.

Two health care officials who spoke at the start of the press conference cited their concern for both health care workers and non-COVID patients, whose care could be compromised if hospitals in the state become overwhelmed caring for COVID-19 patients.

“If we don’t address this correctly, right now, we are going to face even worse problems with the hospitals,” Wolf stressed. “We’re not targeting anybody. The virus is.”

Sounding a more optimistic note, Levine said she expects the widely-anticipated distribution of Pfizer’s COVID-19 vaccine to begin as early as next week in Pennsylvania, where hospital and health care workers will be first to receive it. A Moderna vaccine is expected to be the next vaccine approved for distribution, she said, and the Pfizer vaccine will soon be distributed to residents of nursing homes and long-term care facilities.

In response to a question from a reporter, Wolf said neither he nor Levine anticipated enacting further restrictions to stop the spread of COVID-19 in Pennsylvania.

The Pennsylvania Department of Health Thursday announced 11,972 new cases of COVID-19, which is the second highest daily total reported by the department. The highest new case total was last week, when 12,409 new cases were announced on Dec. 4.

The department also confirmed 248 new deaths from COVID-19, which is the state’s highest daily death toll since the pandemic began. As of Thursday, just over 12,000 Pennsylvanians had died from COVID-19, according to the department’s data.

As of Thursday, the department’s COVID-19 dashboard indicated that 5,877 patients were hospitalized due to COVID-19, with 1,218 of them in intensive care units and 675 patients on ventilators.

The state’s dashboard shows that despite the rise in ventilator use, there is still some capacity statewide to absorb COVID-19 patients.

However, only 13.7 percent of the state’s ICU beds were available as of Thursday.

The website CovidActNow.org, which monitors hospital preparedness in all 67 of Pennsylvania’s counties, tells a similar story locally. According to its data, 80 percent of the available ICU headroom in Northampton County is in use, while in neighboring Lehigh County 78 percent of ICU headroom is occupied.

Both counties have had record-breaking new case counts in recent days.

For more information about the response to COVID-19 in Pennsylvania and the data behind Thursday’s orders, visit the Pennsylvania Department of Health website.