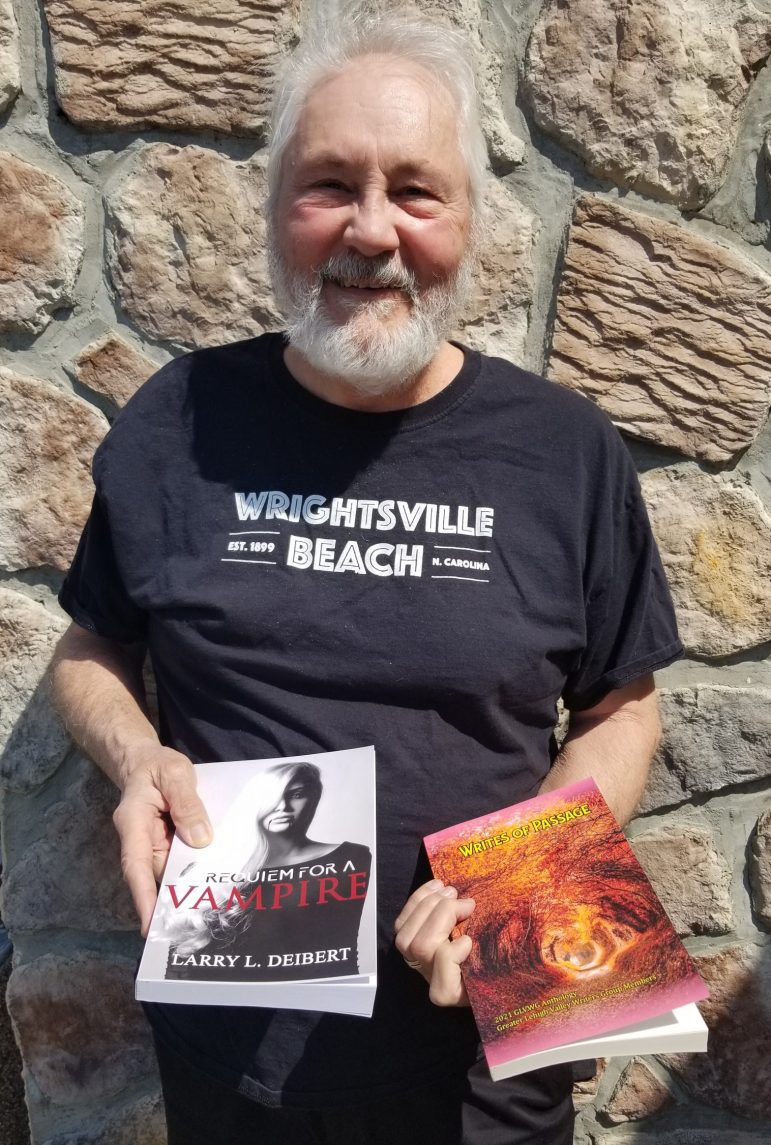 Author and Saucon Valley resident Larry Deibert holds the updated edition of his 2007 paranormal novel Requiem for a Vampire along with an anthology recently published by the Greater Lehigh Valley Writers Group to which he contributed a story about his military service, “653 Days.”

Writers tend to be perfectionists, and that impulse was what ultimately motivated a local author to revisit–and revamp–a work of fiction he wrote more than two decades ago.

Larry Deibert of Lower Saucon Township is the author of more than a dozen books, and it was his very first work, Requiem for a Vampire, that he felt needed some touching up.

“I was not happy with the name of my (main) character,” Deibert explained. “It was Lani Jorgenson and it just sounded stupid.”

In addition to changing his character’s name to Elise Stanhope, he added a setting which since he first wrote the book has become a special place for him: Wrightsville Beach, N.C.

He explained that the book’s ending now has a different twist, but to find out just what that is readers will have to invest in a copy.

Although the changes were initially motivated by his own dissatisfaction with certain elements of the book as he originally wrote it, Deibert said he hopes the updates will make his readers happy, too.

The updated Requiem is a relatively quick read at under 300 pages, and Deibert said the approachability of his work has always been important to him.

“I always subscribe to the ‘KISS principle: Keep It Simple, Stupid,” he said, which is why most of his books are shorter in length.

Deibert doesn’t plan to rewrite any of his other books–unless, he said, he “makes it big.”

In fact, he’s contemplating a retirement free from writing, after devoting much of the last 15 years to his craft.

“We’re putting the pen behind closed doors till who knows when,” he mused.

Deibert explained that when he sits at his computer, “I don’t feel anything coming.” And he’s not the type to force something out of himself if he doesn’t feel it.

Still, he noted that he often gets ideas while on vacation in North Carolina, and he has one planned there this summer.

Before then, he’ll be holding a book-signing at the Moravian Book Shop in downtown Bethlehem.

Friends and fans can stop by and purchase an autographed copy of Requiem for a Vampire or one of his other works this Saturday, April 24, from 1 to 3 p.m.

His contribution, “653 Days,” is about his military service in Vietnam; a subject about which he has written before.

“Write what you know about,” Deibert replied, when asked what his advice to young writers would be. “Learn as much as you can about writing–grammar and such–so you can self-edit more.”

He added that it’s a good habit to “write every day” and to focus on the idea of “showing” with your words, rather than simply “telling” your reader something.

“Showing” a reader something requires the use of more extensively descriptive language.

To learn more about Deibert and his works, visit LarryDeibert.com and follow his author page on Facebook.