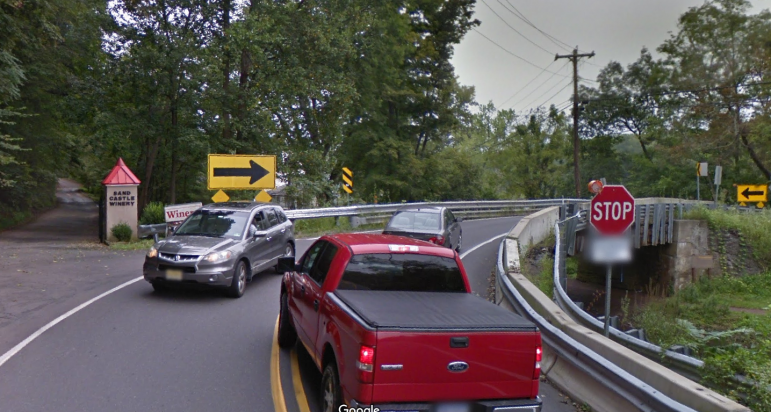 Pennsylvania State Police at Dublin say a New Jersey man crashed his Jeep in the Delaware Canal Wednesday. They said the crash happened after he allegedly failed to stop at stop sign at this overpass on Rt. 32 in Tinicum Township, Bucks County.

Despite the fact that his vehicle ended up partially submerged in the Delaware Canal on its driver’s side, state police at Dublin said Thursday that the operator who is now facing charges as a result of the watery crash wasn’t seriously injured in it.

According to an accident report the barracks released, the crash happened Wednesday at around 2:20 a.m. in the area of 755 River Road (Rt. 32) in Tinicum Township (Erwinna).

Police said 26-year-old Alexander M. Westlein of Lebanon, N.J., was northbound on River Road in a 2010 Jeep Wrangler when he allegedly “failed to identify and stop at the stop sign located at the canal overpass in the vicinity of 755 River Road.”

The overpass is located outside the entrance to Sand Castle Winery and has stop signs for vehicular traffic at either end of it.

Due to his failure to stop, police said Westlein’s Jeep crossed over the road’s southbound lane and shoulder, hit a guide rail “and overturned an unknown number of times as it rolled down an embankment,” before coming to rest askew in the canal waters below.

Police noted that the Jeep’s airbags did not deploy in the crash and said Westlein was wearing a seatbelt at the time. he only suffered a suspected minor injury, according to the police report, and refused transport from the scene by EMS.

Rt. 32 was closed in both directions with traffic detoured for approximately one hour while Westlein’s vehicle was removed from the water by Kirk’s Towing, and state police were assisted at the scene by the Upper Black Eddy Fire Department, the report said.

According to police, Westlein will be cited with multiple state vehicle code violations, including an alleged stop sign violation. Police said the charges will be filed in Bucks County District Court 07-3-03 in Ottsville.

Note: All individuals charged with a crime are presumed innocent until proven guilty in a court of law. This story was compiled using information from the Pennsylvania State Police at Dublin.