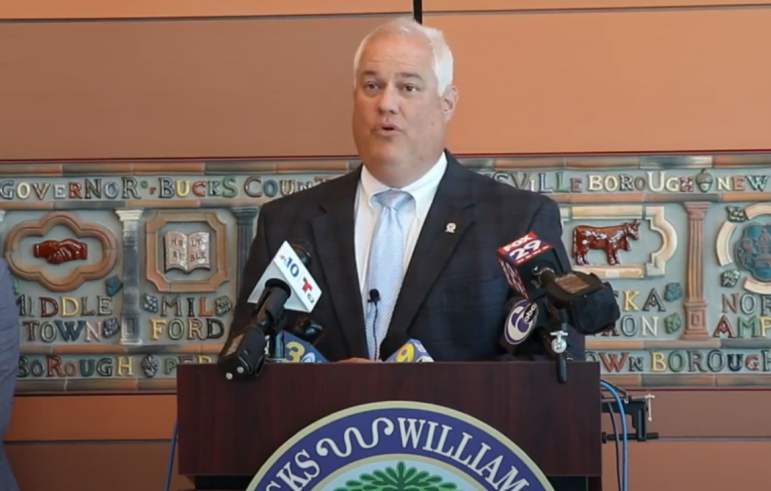 Bucks County District Attorney Matt Weintraub announced charges against two teenage brothers from New Jersey in the stabbing death of a man on East Pumping Station Road in Richland Township Wednesday night, but many questions about the case are still to be answered, including what possible motive might have existed for the killing.

In a news release issued upon the conclusion of a press conference Thursday afternoon, Weintraub’s office announced the charges against Anthony Joel Gamble, 19, and Joshua David Gamble, 17, who is being charged as an adult. The brothers are both from Somerset, N.J., the DA’s office said, and are being charged with criminal homicide, criminal conspiracy, possession of an instrument of crime and tampering with evidence.

According to court records, both men were denied bail at their preliminary arraignment before Judge Lisa Gaier and were committed to the Bucks County Correctional facility.

Weintraub said the Gamble brothers have no known connection to Richland Township or anywhere else in Bucks County, so how they ended up in the area–the alleged perpetrators of a homicide–is something investigators will work to uncover in the coming days.

The man the brothers are accused of killing hasn’t yet been identified and Weintraub said it isn’t 100 percent certain that he was killed in Bucks County. There is a presumption he was, however, because under the law the presumption is that a homicide occurred in the jurisdiction where the victim was found deceased, unless there is evidence to the contrary.

“For that reason, we will presume that Bucks County has jurisdiction to investigate and prosecute this murder,” Weintraub said.

The following version of events that led to the arrest of the Gamble brothers was provided by the district attorney’s office in its news release:

After the brothers were detained, the district attorney’s office said troopers found “a substantial amount of blood inside the Audi and requested backup.”

Police entered the woods and found a man’s body a short distance from where they said Joshua Gamble had been lying on the ground, and from where the Audi was parked.

“The initial investigation indicates the unidentified male appeared to have stab wounds about his head, neck, upper chest and arm,” the release said. “A large knife was found on the passenger floor of the Audi. The knife had blood on the blade and its wooden handle.”

An autopsy of the victim is scheduled to be performed by the county coroner on Friday.

The DA’s office said evidence that was seized as part of the investigation included sanitizing wipes which were allegedly found on the Audi’s roof, along with a cell phone.

According to the DA’s news release, both the wipes and two pairs of coated work gloves were purchased by Joshua Gamble at the 7-Eleven in Richlandtown about 20 minutes before state police arrived at the scene of the crime.

According to their criminal court dockets, a preliminary hearing for Anthony Gamble and Joshua Gamble is scheduled to be held Thursday, July 1 at 1 p.m. before Gaier in Bucks County District Court 07-2-05 in Quakertown.

The court records do not list an attorney for either brother.

Note: All individuals charged with a crime are presumed innocent until proven guilty in a court of law. This story was compiled using information from the Bucks County District Attorney’s office and Bucks County court records.