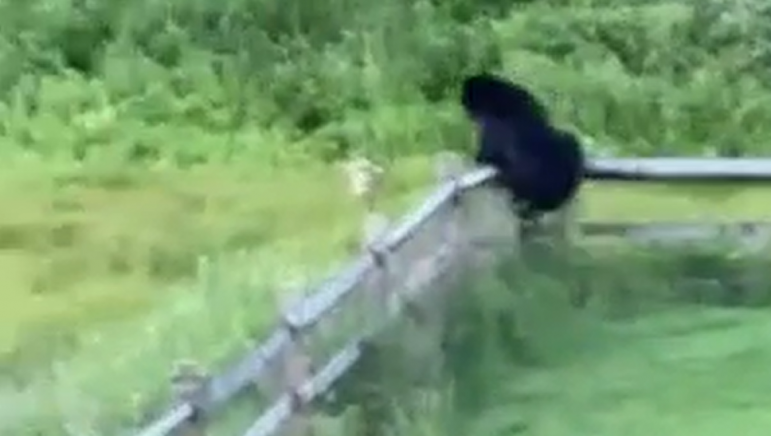 A black bear sighting was reported on Cumorah Avenue in Center Valley Thursday.

An Upper Saucon Township resident observed a black bear near his home on Cumorah Avenue in Center Valley Thursday, and captured the bruin on video.

The Cumorah Avenue neighborhood is near Rt. 309 and Lanark Road in the township.

In the video below, the bear can be seen nimbly climbing over a split rail fence near a drainage swale.

According to the Pennsylvania Game Commission website, black bears are intelligent and curious as well as “surprisingly agile” and capable of running at speeds of up to 35 mph.

They can be attracted to human food if it’s left outside, so the commission recommends that families living in areas where bears have been spotted keep their garbage inside until the morning of its scheduled collection.

It is illegal to feed bears in Pennsylvania, and state game officials point out on their website that too often “fed bears become dead bears.”

If you encounter a bear outside, you should not try to approach it or engage its attention.

The following information is from the game commission website’s page titled “Living With Black Bears.”

What To Do If You Meet A Bear

Bear attacks are extremely rare, especially considering how often people encounter them. In most cases, a bear will detect you first and leave the area long before you’ll ever see it. However, if you do meet a bear before it’s had time to leave, here are some suggestions. Every bear encounter is different.

Alert the bear — If you see a bear, make some noise to alert the bear of your presence, giving it ample time and space to turn and leave. Avoid being caught up in the excitement of seeing a bear and inadvertently letting the bear get too close before surprising it.

Get back — If you have a close encounter, back away slowly while facing the bear so you always know where the bear is and how its reacting. Wild bears rarely attack people. Slowly backing away diffuses the situation and gives the bear room to flee.

Stay calm — encountering a bear can be startling, but try to remain calm. While moving away, avoid sudden movements and talk to help the bear keep track of your retreat. Don’t turn and run or attempt to climb a tree. Running may prompt the bear to give chase, and climbing a tree could be interpreted as a threat to any cubs that are present since cubs often climb trees when startled. Move toward your camper, house or vehicle if nearby.

Pay attention — Bears will use all of their senses to figure out what you are. If they recognize you as a person, some may stand upright or move closer in their efforts to detect odors in the air currents. Don’t consider this a sign of aggression. Once a bear identifies you it will usually leave. If it begins to slowly approach you, face the bear, wave your arms wildly and shout while continuing to back away. The idea is to intimidate the bear into retreating. Swing a stick, your backpack or whatever is handy if the bear gets close. If suddenly surprised, some bears may feel threatened and give warning signs that they are uncomfortable. They may clack their jaws together or sway their head; those are signs for you to leave. Some bears have been known to charge to within a few feet when threatened. If this occurs, wave your arms wildly and shout at the bear.

Fight back — Black bear attacks are extremely rare. If a black bear attacks, fight back. Bears have been driven away when people have fought back with rocks, sticks, binoculars and even their bare hands.

The Pennsylvania Game Commission is responsible for managing, conserving and protecting all wildlife, and is committed to doing everything possible to keep bear conflicts to a minimum. Regulating harvest to stabilize or reduce bear numbers in problem areas and prohibiting the feeding of bears are measures taken to help alleviate conflicts with bears. If you are having a problem with a bear and have no success using these suggestions, or have been threatened by a bear, please contact the appropriate Game Commission region office.