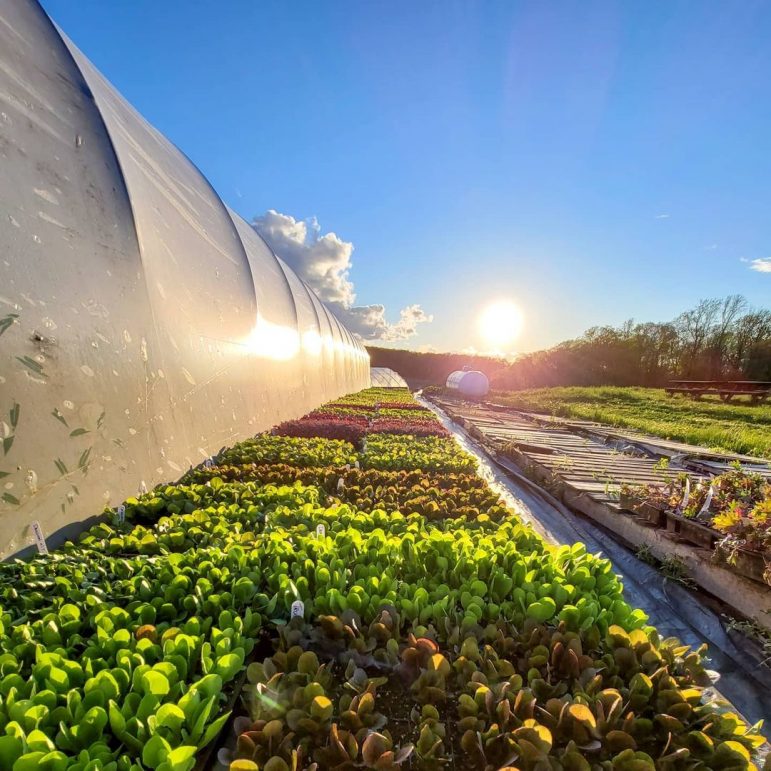 Blackbird Farms founder Kegan Hilaire is excited to bring his farm’s heirloom, organic and non-GMO produce to the Saucon Valley Farmers’ Market for the first time this summer. With over 100 varieties of vegetables and fruit being grown this season, the Upper Milford farm will have an extensive selection of produce for market-goers to purchase.

The Blackbird Farms stand will be a new sight for regular visitors to the Saucon Valley Farmers’ Market this season. While the farm’s founder, Kegan Hilaire, has worked at other markets in the past, he is excited to sell Blackbird Farms’ certified organic produce at the Hellertown market for the first time this summer.

Hilaire’s dedication–which is almost an obsession–with producing organic, natural food takes precedence in much of what he does with Blackbird Farms, which is located in Upper Milford Township, Lehigh County. His interest in all things organic began once he started getting into cooking himself and dealing with various kinds of food.

He still remembers a fateful encounter with an egg, which forever shaped the way he views and prepares food.

“We got pastured eggs, and I started cooking with those eggs and eating those eggs, and there’s just a noticeable difference in pastured versus conventional eggs,” Hilaire said. “I started trying to figure out what made it different.”

Hilaire described what follows as diving “down the rabbit hole” of organic foods and vegetables, and discovering what makes them unique and healthy. He soon understood that better management increases the quality of food.

“Did you know that commercially produced fruits and vegetables have lost, on average, 30 percent of their nutritional value since 1950?” Blackbird Farms’ homepage asks visitors.

Hilaire said this is due in part to producing food that’s meant to last as it’s shipped throughout the country, rather than producing food with real nutritional value, which is more highly perishable.

“We’re breeding veggies for shelf life and ship-ability,” said Hilaire. He contrasted commercially marketed produce with the organic, heirloom and genetically unmodified food he grows, which he said is all “developed and cross-bred, naturally, for either taste, flavor or nutritional value.”

Hilaire was also disturbed by the size of the carbon footprint of the food Americans eat.

Hilaire set out to address these issues by learning how to grow organic food. He spent a season on an organic farm in Pipersville, before ending up at the Rodale Institute. 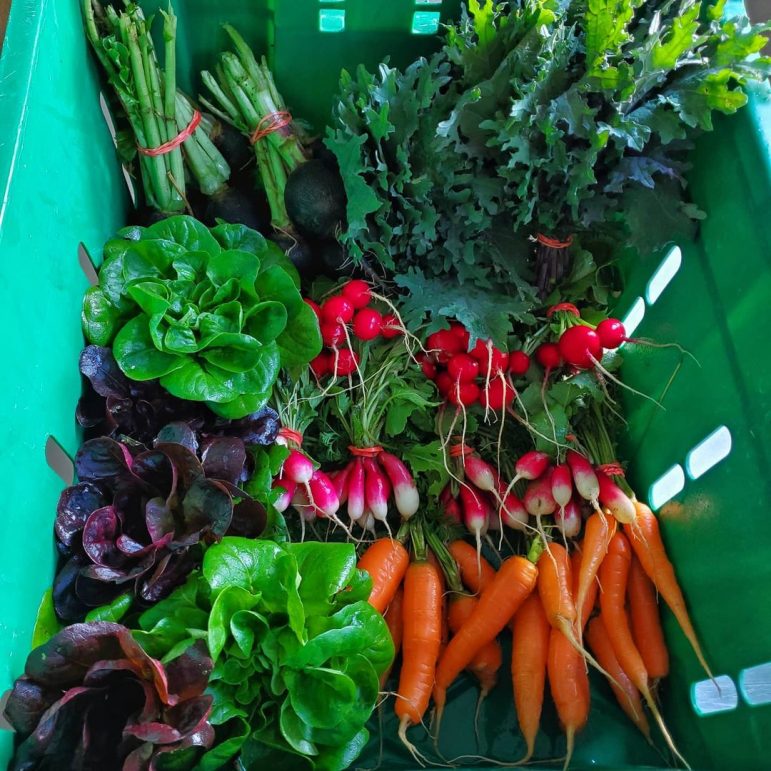 Kegan Hilaire, founder of Blackbird Farms, focuses on growing organic, heirloom and genetically unmodified foods in response to commercially-produced foods, which he says typically lack nutritional value and have a large carbon footprint.

When COVID struck in 2020, it forced Hilaire away from the farm at Rodale, so he developed the concept for Blackbird Farms as a way to continue honing his craft away from his job.

“I wanted to make sure that I still had something else going on,” he said, “so in my parents’ backyard I set up permanent raised beds” where he would grow food for family, friends and neighbors.

He has since relocated to the incubator-model Seed Farm on Vera Cruz Road, where he currently grows all of Blackbird Farms’ food, and there is a ton of it.

“The last time I looked at my list I had over 100 different varieties of things that were going into the ground this year,” Hilaire said.

Visitors to the Saucon Valley Farmers’ Market over the course of the next few weeks will find the Blackbird Farms stand loaded with all sorts of produce, including a variety of greens, six different varieties of summer squash, twelve different kinds of tomatoes, root vegetables, onions, garlic, okra, tomatillos, cucumbers and various herbs, to name a few.

Hilaire is perhaps most excited about growing and selling four different heirloom potato varieties, and he will also soon have pepper varieties for fans of the extremely spicy kind.

“I’m doing a bunch of what we call ‘stupid hot peppers.’ I have the Apocalypse Scorpion, the Trinidad Scorpion, the Carolina Reaper and then some mole chilis that we’re going to roast,” Hilaire said.

Blackbird Farms also offers a farm share program, which is a subscription-based service where members receive a weekly supply of the farm’s produce during the season, which runs from June through October.

The farm’s large farm share subscription is $750 for the season, and Helaire said it’s ideal for a veggie-loving group of three to five who eat vegetables regularly throughout the week.

The small subscription is $475, and is ideal for one or two people.

“Basically, you’re getting all of my produce at, or better than wholesale pricing, so you save yourself a bunch of money,” Hilaire said.

The farm share program also has some unique perks. Hilaire regularly includes eggs from Rodale in farm share boxes, as well as other occasional specialties like raw-milk cheese, coffee and potentially full-farm dinners later in the summer.

Subscribers also receive access to a private chef Facebook group, which is run by the Head of Culinary Operations at Northampton Community College, Will Rufe.

“One of the biggest complaints is, ‘I don’t know what to do with all this stuff,'” Hilaire said. “(With the Facebook group) you have a chef to ask and literally give you recipes.”

Farm share boxes may be picked up between 2 and 7 p.m. on Fridays at the Seed Farm located at 5854 Vera Cruz Road in Emmaus. Arrangements may also be made to pick them up at the Saucon Valley Farmers’ Market on Sundays from 9 a.m. to 1 p.m., or at the Perkasie Farmers’ Market, where Hilaire also vends on Saturdays.

Individuals interested in specific products or who wish to place an order may call or text Hilaire at (610) 297-0244 or email blackbirdfarmspa@gmail.com.

For more information about the farm and its farm share program, or to check out its merchandise, be sure to visit the Blackbird Farms website.

Also check out our recent No Rain Date podcast interview featuring Meagan Grega, co-founder of the Kellyn Foundation, for an in-depth conversation about plant-based diets, healthier eating habits and the foundation’s mobile market.

Read some of our other Saucon Valley Farmers’ Market vendor profiles before you pay them a visit.