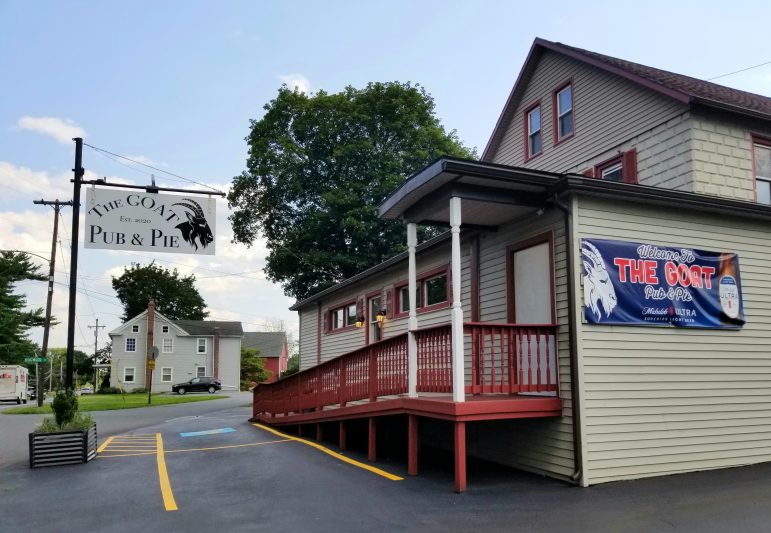 The GOAT Pub & Pie is located on Main Street in Stockertown, just off Rt. 33. Its convenient location near the area’s main north-south highway makes getting there from almost anywhere in Northampton County a cinch.

The GOAT Pub & Pie in Stockertown opened in late April with Detroit-style pizza as a focal point of its menu, after co-owner Sam Ashton picked up on the crusty square pie trend while living and working in Philadelphia.

Detroit-style pizza is unique in part due to its rectangular shape, which comes from being baked in steel automotive part pans; a tradition that pays homage to Sicilian-style pizza and began in the mid 1940s, according to the GOAT’s menu description of it. 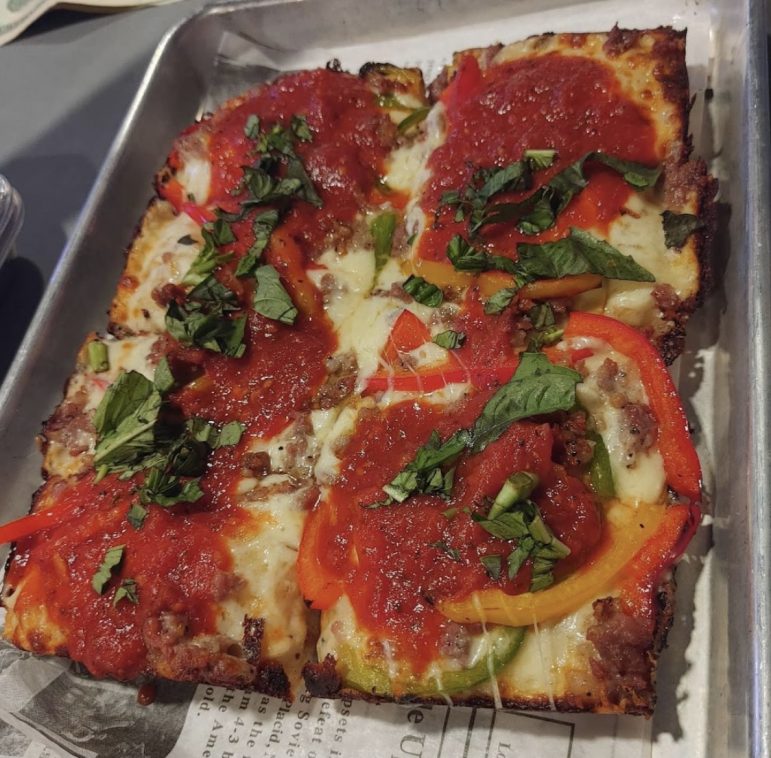 The GOAT Pub & Pie’s 700 Main Pie is topped with Giacomo’s sausage, which is made locally, as well as other ingredients. (Contributed Photo)

Sourcing local ingredients from businesses like Giacomo’s is something Ashton said he and the GOAT’s other owners are happy to do, and was possible because of connections they developed while working as bartenders at an Easton area establishment: Rip Van Winkle’s, which was located inside Palmer Township bowling alley Bar-Don Lanes.

“Rip’s” was where Ashton, a Bethlehem Township native, first met brothers Matt and Tim Cosover, who grew up in the Easton area and also tended bar there.

With a degree in journalism from Penn State, Ashton had moved on from bartending to working in marketing by the time the coronavirus pandemic began in March 2020. 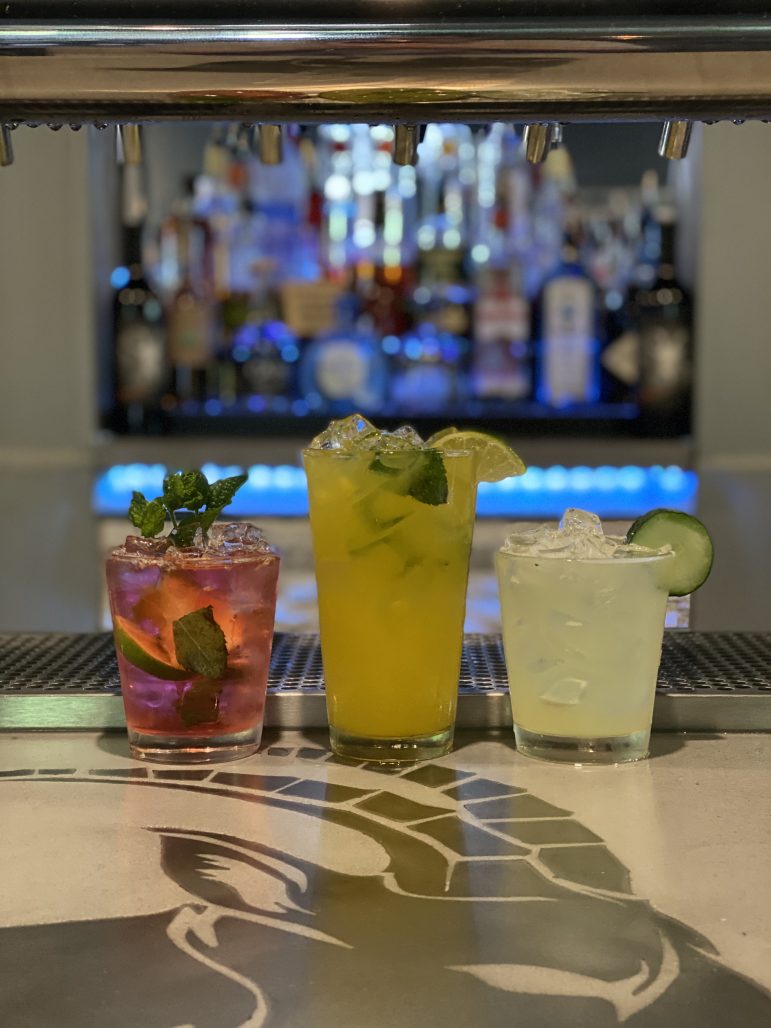 He lost his job, and around the same time the Cosover brothers found themselves out of work because of the government-mandated shutdown of bars and other businesses that were deemed “non-life-sustaining.”

“At that point, we had this idea that we would open our own place,” Ashton recalled.

He admitted there was apprehension due to their decision to plan a business opening in the midst of a pandemic, but things ultimately worked out in their favor.

A post shared by The GOAT Pub & Pie (@thegoatpubpie)

The GOAT Pub & Pie welcomed its first customers on April 26, 2021 at 700 Main Street in Stockertown, not long after the state eased many of its remaining restrictions on indoor dining and re-allowed bar seating for the first time in more than a year.

“We ended up getting pretty lucky with the level of restrictions by the time we opened,” Ashton said.

Located in a building that previously housed a different establishment, the concept for the GOAT (which Ashton said is an acronym for “the Greatest of All Times”) was basic.

The goal was to provide customers with a limited menu featuring freshly-prepared, high quality food in an atmosphere that was equally comfortable for a family night out or watching a game at the bar. 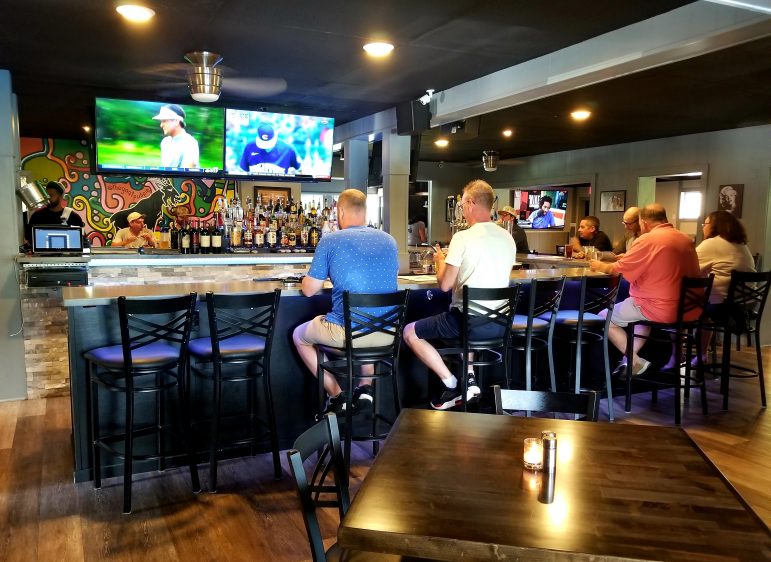 The bar at the GOAT Pub & Pie in Stockertown offers guests a comfortable place to sit and watch a game while enjoying a drink or a meal.

“We figured if we could do our main basics but do them great, then people would come back,” Ashton said.

The kitchen is the domain of head chef Matt Gonzalez, who was known to Ashton and the Cosovers from their time working at Rip Van Winkle’s and was eager to take on a new challenge at the GOAT.

“We do your classic pub/tavern fare,” which at the GOAT includes items such as onion rings, fried mozzarella, wings, a burger, a pulled pork sandwich and a cheesesteak, Ashton said. On top of that is the focus on Detroit-style pizza, along with a couple of desserts, including their unique Oreo Grilled Cheese. 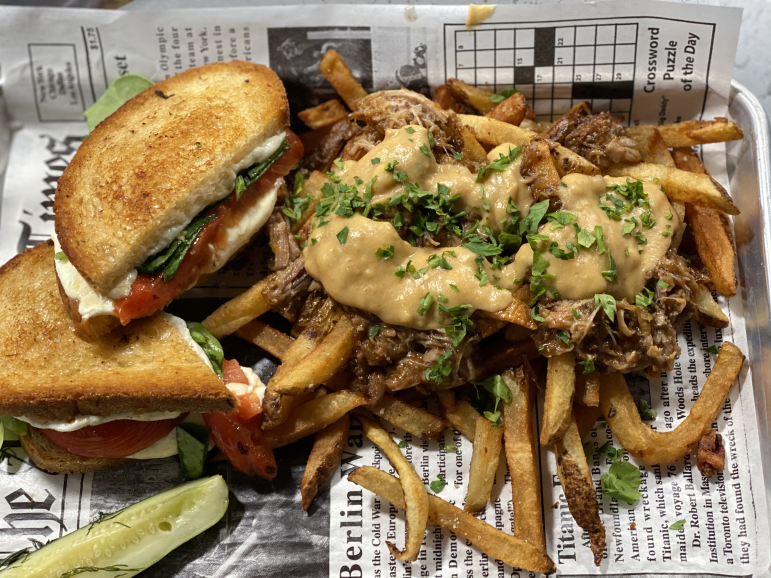 All of the sauces, dressings and other ingredients in the dishes are made fresh on-site.

“Our fries are cut fresh every morning,” Ashton said. “We want to have good food. There are a million places where you can get a drink.”

Due to its location on a somewhat narrow lot, the GOAT doesn’t offer outside dining, however there is ample seating inside its dining room and adjacent bar area. Parking is available behind the restaurant, and takeout is offered at off-peak times, Ashton said.

In addition to a specialty cocktail list, the GOAT offers a draft list that includes beer, cider and even hard seltzer. 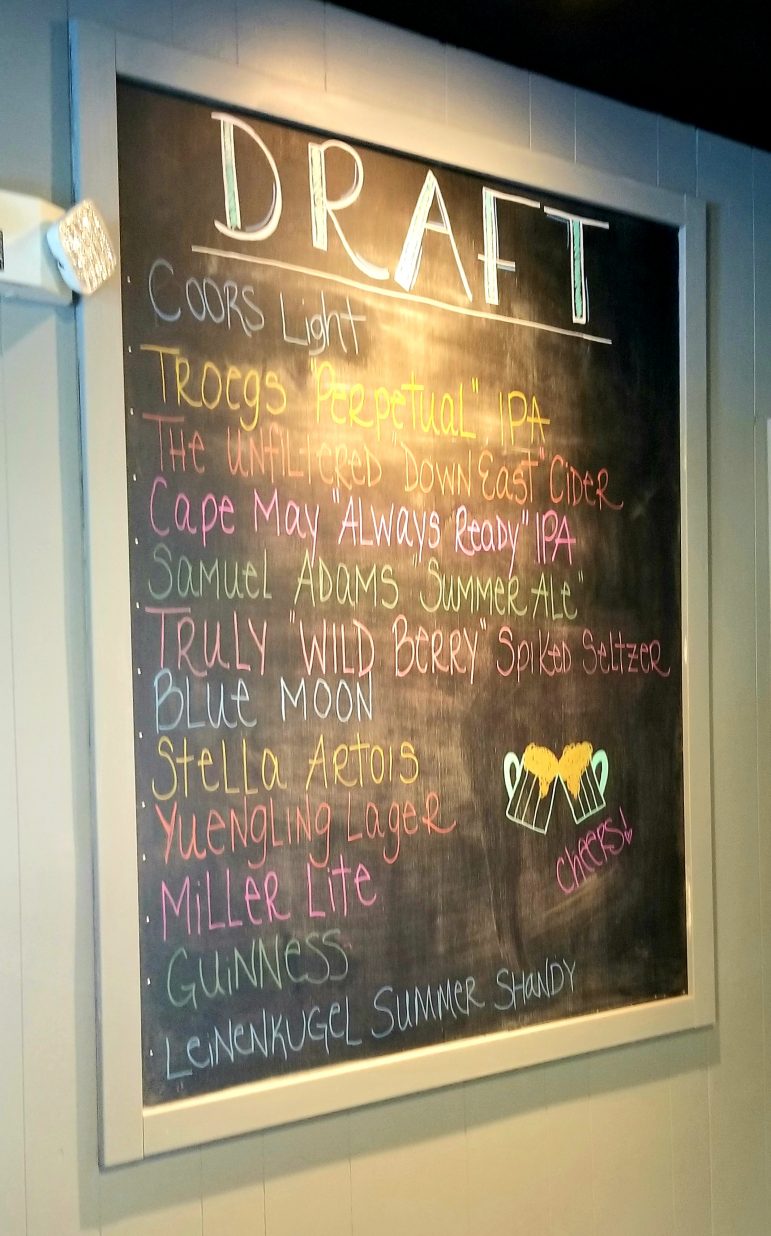 A rotating draft list is written on a chalkboard behind the bar at the GOAT Pub & Pie in Stockertown.

Ashton said the Stockertown community has embraced the GOAT since it opened, but he and his partners–a fourth co-owner is Jonathan Quayle of Bethlehem–are also seeing faces from further afield on a regular basis. All of the owners are actively involved in running the business, and Ashton said they have received “a ton of support,” including from friends who are part of the local restaurant industry such as the Bayou Boys.

“We try our best,” Ashton said. “We want to make sure that people not only come in here and have a good time, but that they want to come back.”

The GOAT Pub & Pie is open Tuesday through Sunday from 3 to 11 p.m. More information along with their menu may be found on their website, and regular updates are posted on their Facebook and Instagram feeds, which Ashton maintains. 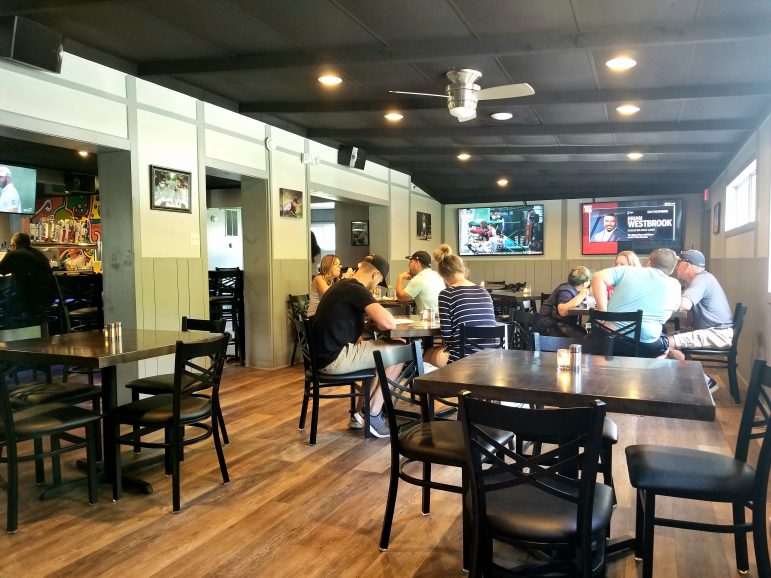 The dining room at the GOAT Pub & Pie is next to its bar, and is a comfortable place for groups of various sizes to enjoy a meal. 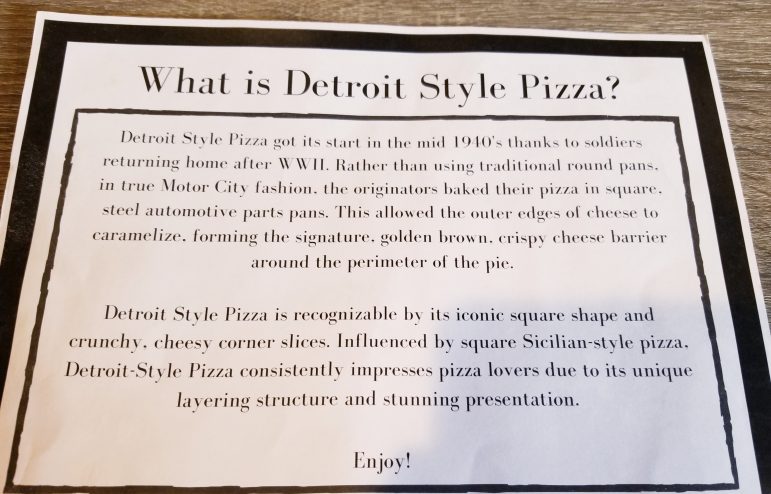 Since Detroit-style pizza is relatively unknown in eastern Pennsylvania, the GOAT’s menu includes a description of their signature dish. 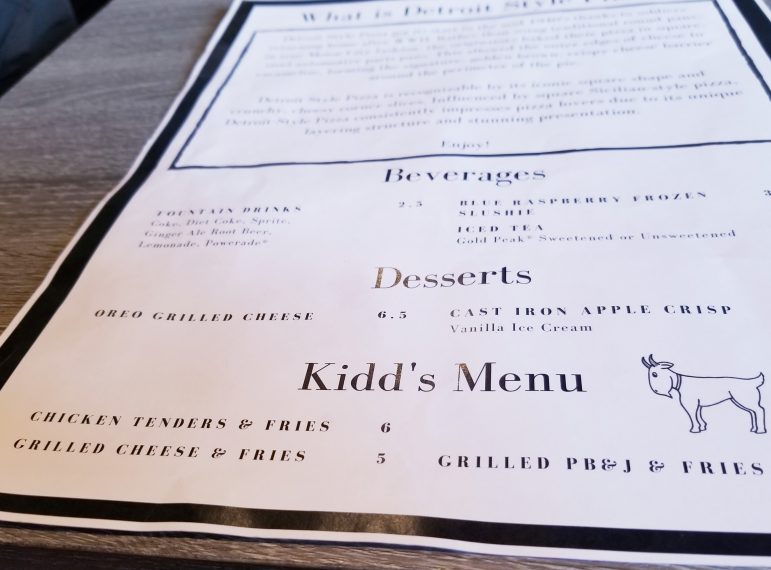 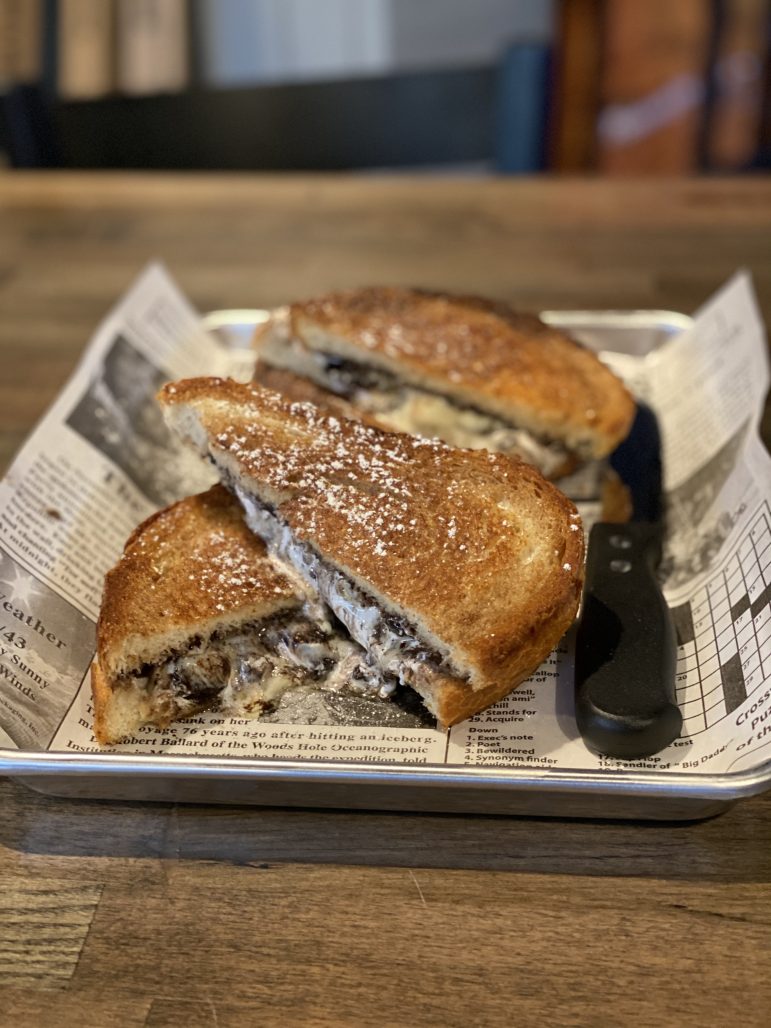 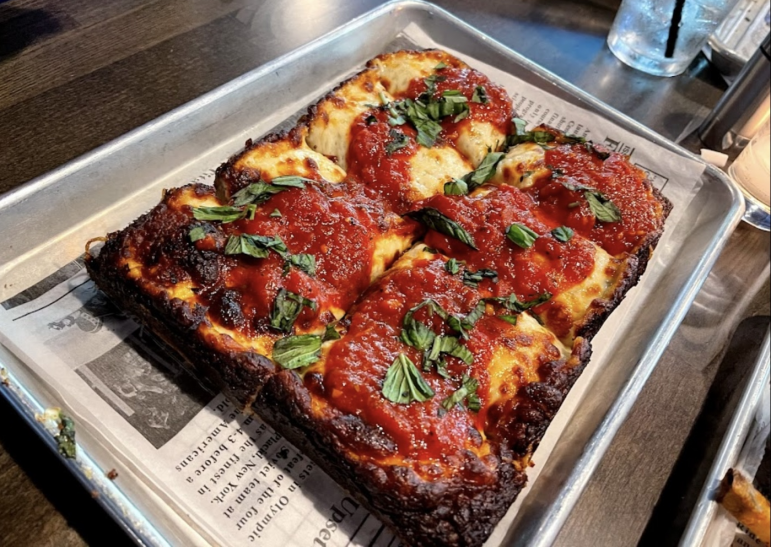 A Classic Pie from the GOAT Pub & Pie in Stockertown is made with house-made marinara sauce, mozzarella, provolone and herbs. The new eatery is introducing many local residents to Detroit-style pizza. (Contributed photo) 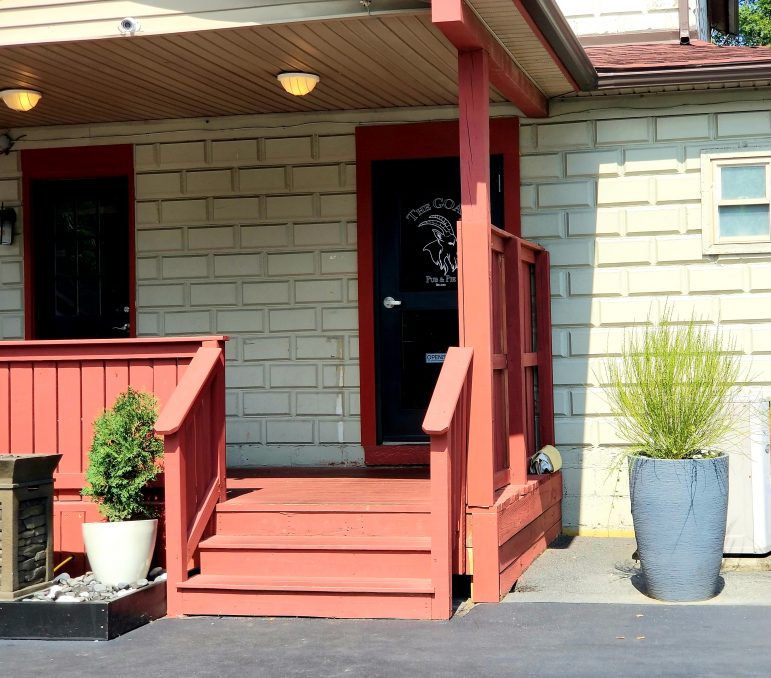 The rear entrance to the GOAT Pub & Pie, which is located at 700 Main Street in Stockertown, Pa. 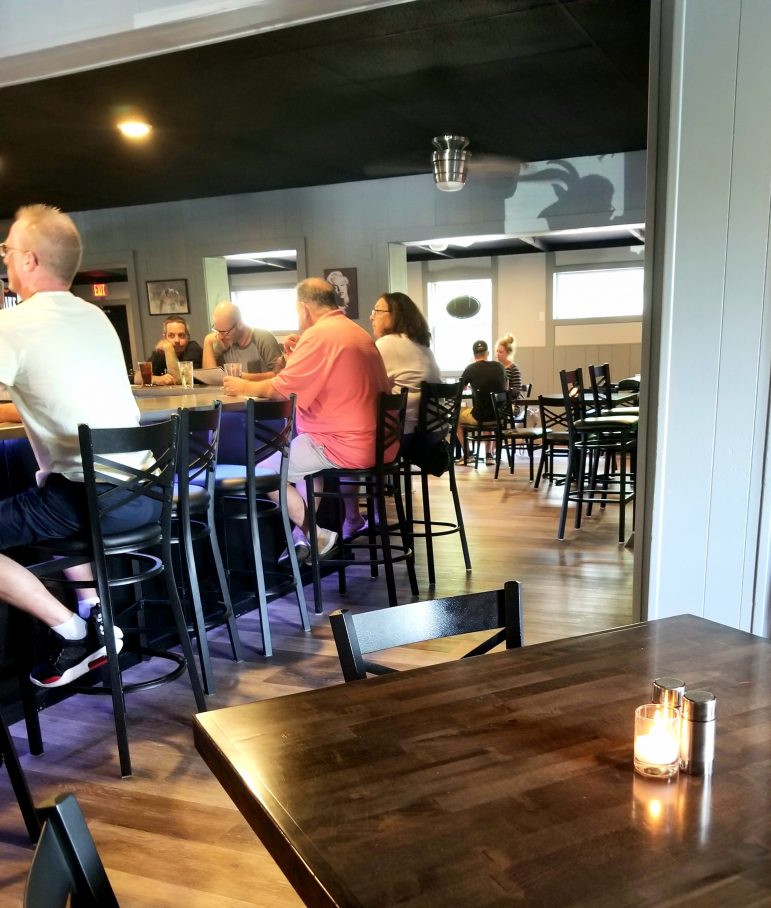 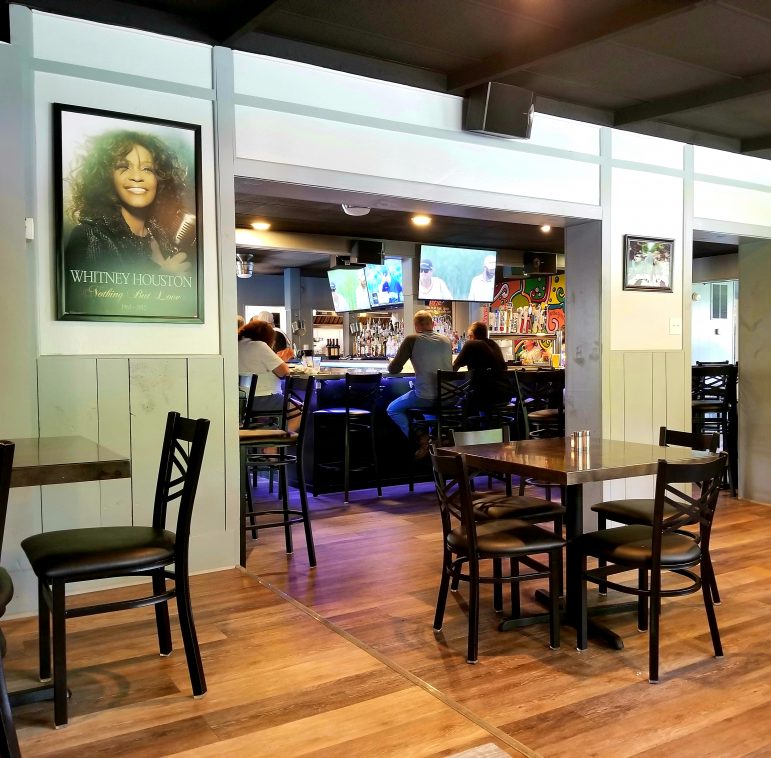 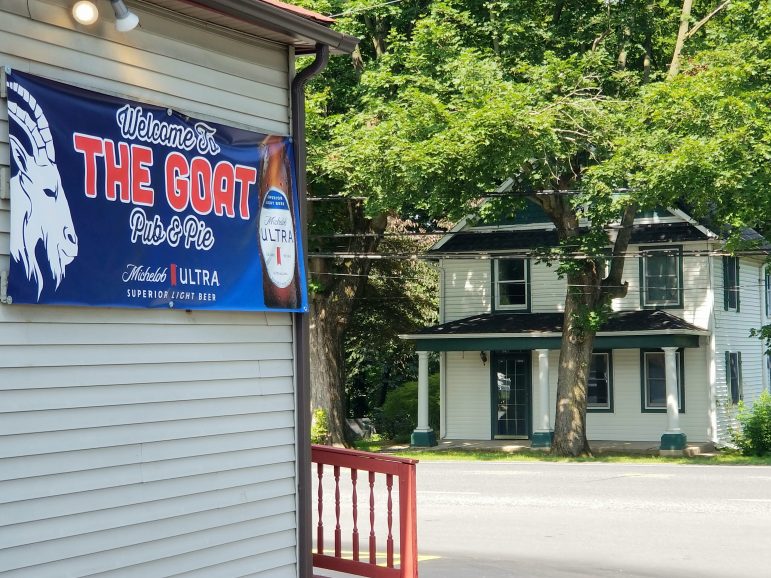 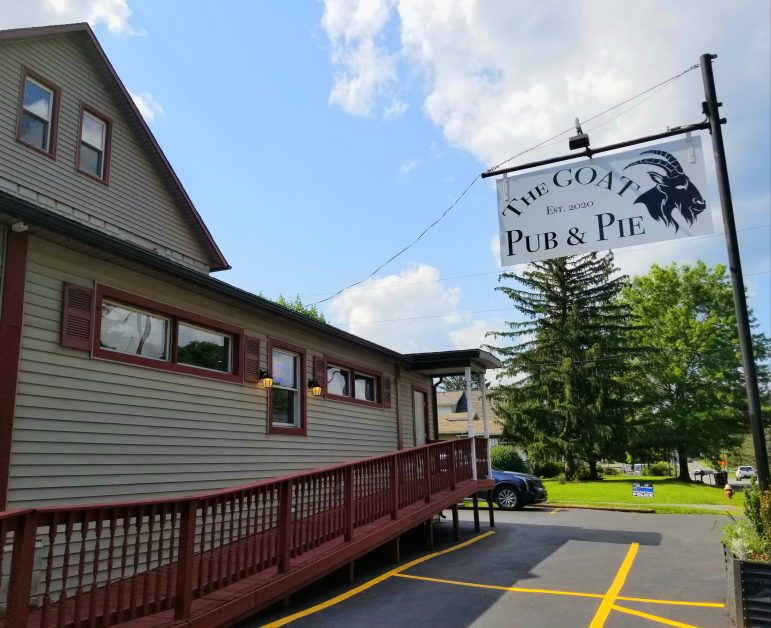