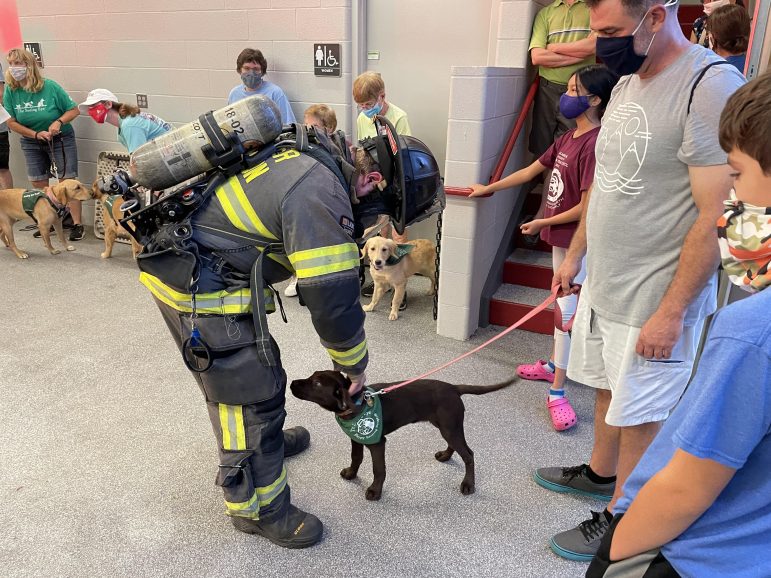 It was a fun and eventful Monday night at Lower Saucon Fire Rescue’s Leithsville fire station as nearly a dozen Seeing Eye puppies-in-training paid a visit to meet firefighters and community members.

The event was organized by members of the Lehigh County and Northampton County Seeing Eye Puppy clubs as a way to expose the future guide dogs to emergency response personnel.

Robyn Oplinger, leader of the Lehigh County Seeing Eye Puppy Club, explained that it is crucial that the puppies be exposed to all sorts of environments, so they remain composed and focused on their jobs as adults.

The puppies in attendance Monday night were greeted by firefighters donning full fire response gear. The firefighters also activated various emergency alarms, lights and signals in the presence of the puppies.

“Seeing you folks in your gear is very important, because we don’t want these dogs to get spooked,” Oplinger told members of Lower Saucon Fire Rescue.

The puppies were even treated to an active hose-running demonstration, in which Lower Saucon firefighters rehearsed clearing a building and running a firehose. 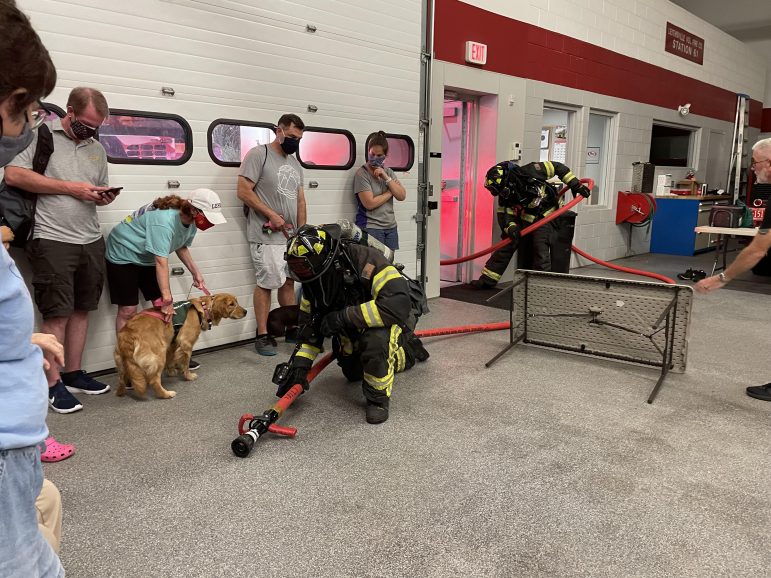 Members of the puppy clubs and Lower Saucon Fire Rescue also engaged in a discussion about responding to emergencies in homes with guide dogs, and what sort of special measures may be taken.

Seeing Eye has been partnering with people who are blind and providing guide dogs to them since 1929. The organization has puppy-raising clubs in Pennsylvania, New Jersey, New York and Delaware.

Every puppy in attendance was bred at the organization’s breeding station in Chester, Pa. Shortly after a puppy is born at the facility, Seeing Eye sends it to one of their various puppy-raising clubs, where volunteers raise and teach them basic obedience until the age of approximately 16 to 20 months.

“Our training is different than a lot of other places,” Oplinger said. “We don’t use treats. We use positive behavior.”

Oplinger and her husband, Dennis, are currently raising their 15th and 16th dogs in the program: two black labs named Felix and Hese, respectively.

For Dennis, volunteering with the program is as beneficial for the puppies as it is for him.

“It gets me out walking,” he laughed. “I walk like three miles a day.” 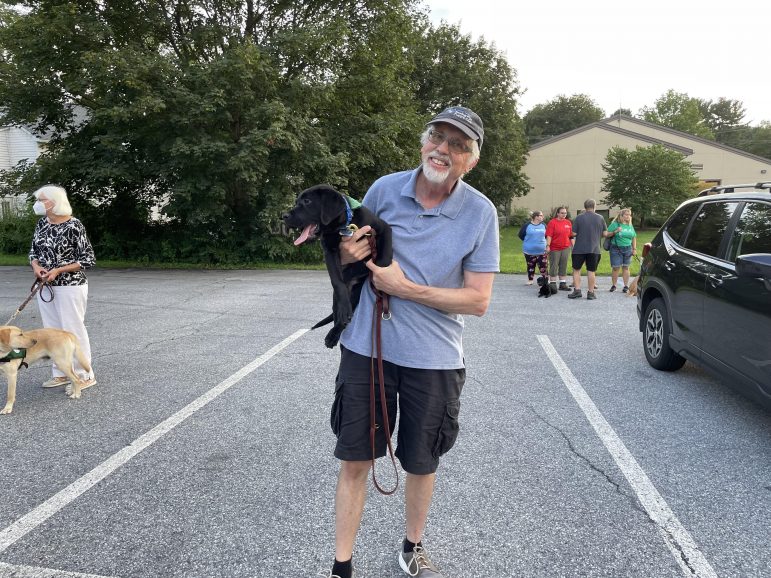 Dennis Oplinger holds a black Labrador Seeing Eye puppy named Hese. Hese is the 16th puppy Dennis and his wife Robyn have raised with the club.

Gina Antiga, who leads the Northampton County Seeing Eye Puppy Club, was also in attendance with her 7-month-old German Shepherd; the twelfth puppy her family has raised for the program.

“Prior to COVID, in Northampton we used to do monthly meetings where we train the dogs,” Antiga said. “Obviously the adults need training, too. We have certain commands we use.” 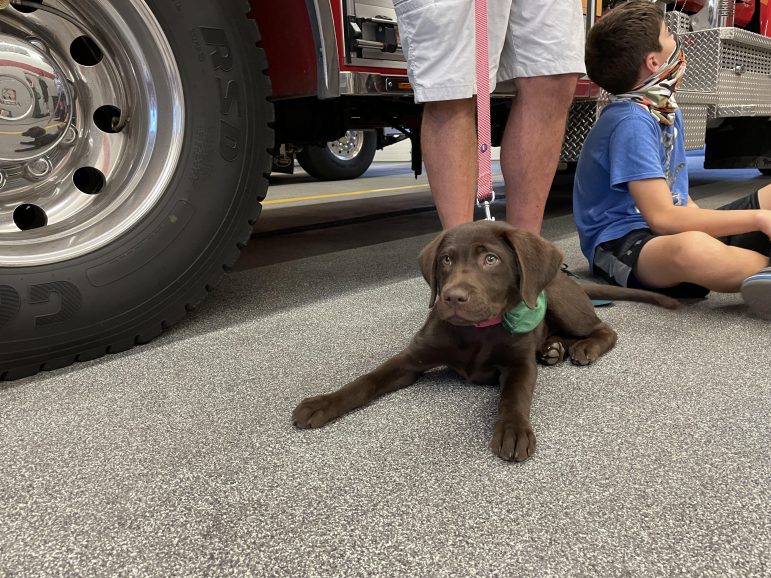 A chocolate Labrador puppy named Haley gazes in the direction of a group of Lower Saucon firefighters.

It was a special night for Antiga’s German Shepherd, Les, who was awarded his Seeing Eye vest, an important milestone in the career of a future Seeing Eye dog.

Les was vest-certified by Shannon Rager, who works as a coordinator between Seeing Eye’s main campus in Morristown, N.J., and seven local puppy-raising clubs, including Lehigh and Northampton.

Rager said the vest is symbolic, in that it helps simulate the harness working Seeing Eye dogs regularly wear.

“I want to make sure they know their basic commands,” said Rager, when describing the process of awarding a puppy their Seeing Eye vest.

“I also do a basic mouth, ear and feet check, to simulate what it would be like when going to the vet’s office, just to make sure they’re fine having me touch them,” she continued. “I know Les had a ton of exposure, so for me it’s a pretty easy vesting.” 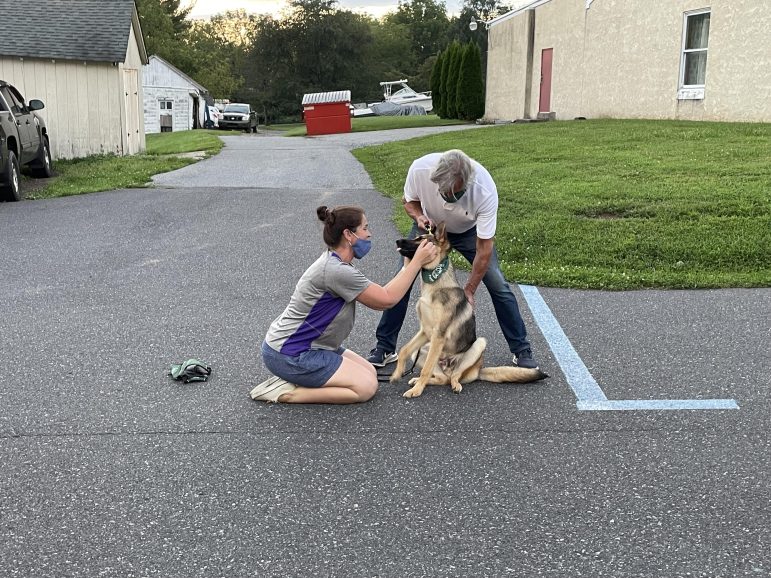 Area coordinator Shannon Rager performs a physical on 7-month-old German Shepherd, Les. The physical is part of the process of earning his Seeing Eye vest, which was an important milestone in his career.

Les is a special dog to the Northampton County club and its members, because he was named after a puppy raiser who lost a battle with COVID.

“A donor to Seeing Eye named him in honor of Les,” Antiga said. “He was in our club, so I was happy to raise Les.”

Debbie Rozear and her Seeing Eye dog, Virgil, attended Monday’s event to talk to those in attendance about life as a blind person with a guide dog.

Rozear stressed how important it is for Seeing Eye dogs to remain with their handler at all times.

“I tried to leave him by a table one night in a reception hall, and I was just going to the bathroom,” she said. “He actually pulled the table with him, so he wants to make sure he is with me everywhere I go.” 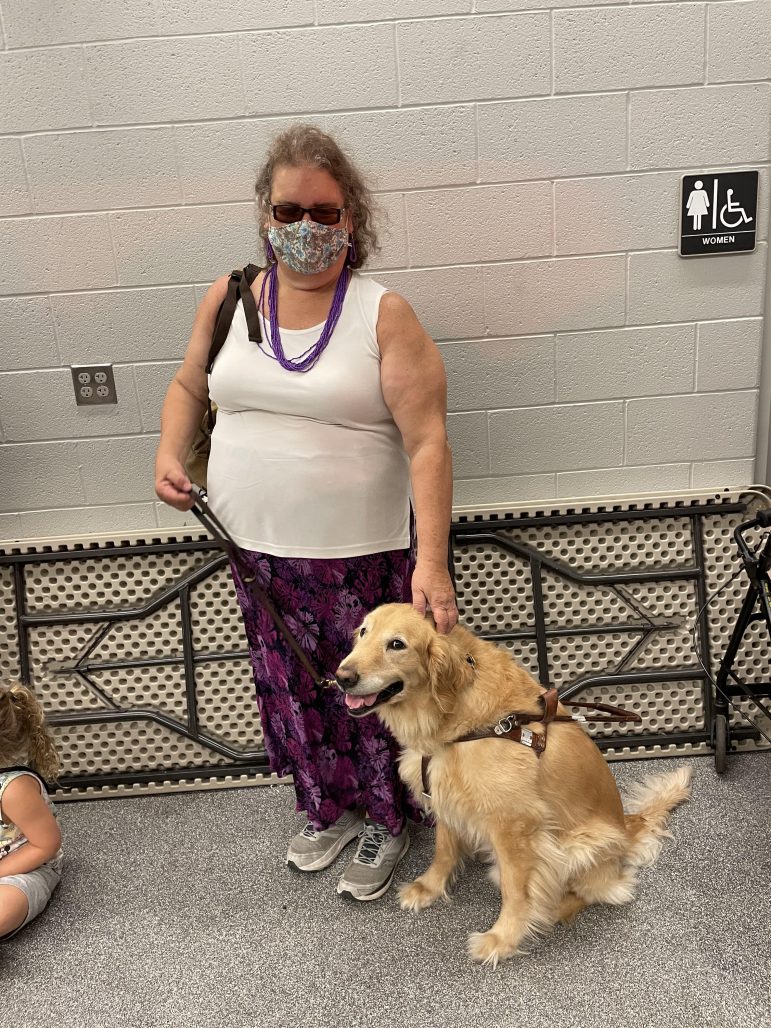 Debbie Rozear stands with her Seeing Eye dog, Virgil. Rozear and Virgil have been working together since 2014. Virgil is the third dog Rozear has worked with through the Seeing Eye program.

Rozear, who lives in Allentown, was born fully-sighted but developed glaucoma at an early age.

“In my middle years I started noticing changes, and it took about 10 years until I lost sight totally, but I have adjusted very well,” she said.

Rozear currently works as a supervisor of core and housing services for the Lehigh Valley Center for Independent Living.

She received her first Seeing Eye dog, a male black lab, in 1998. Virgil, who she has had since 2014, is her third dog with the program.

“They all kind of work at their own pace, and you know when they’re ready to retire,” she said.

When someone is ready to receive a Seeing Eye dog, they travel to the organization’s Morristown campus, where they live and train with Seeing Eye dogs for approximately a month.

During the course of the training, Seeing Eye dogs and handlers practice just about everything they may encounter when moving about the real world.

“When you first get there the instructor takes you out with a leash and a harness,” Rozear said. “They show you how to hold it, and they have you walk with them.”

“They want to know how fast you walk, how much pull you need,” she continued. “They asked me how fast I like to walk, and I told them I wanted a dog with variable speeds,” she laughed.

One speed that Rozear and her Seeing Eye dogs have always enjoyed is fast. She has completed speed walking 5k road races with her two most recent guide dogs.

“The first time they put me all the way in the back, there were over 1,400 people,” Rozear said. “Well, my dog passed over 350 people, so the next year they told me I could go wherever I wanted!” 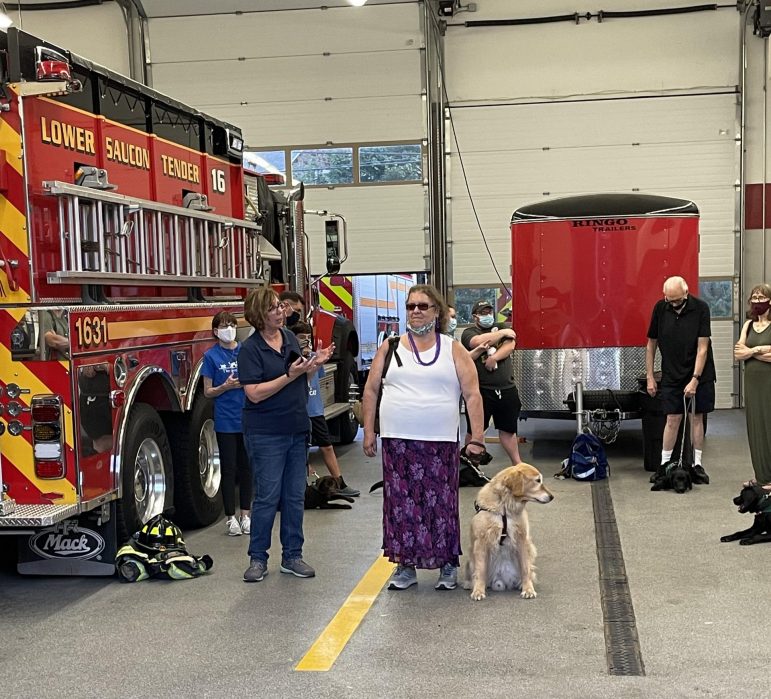 Rozear’s previous guide dogs worked with her until they were over 10 years old. With Virgil’s ninth birthday coming up next January, Rozear realizes that his working days may soon be numbered.

Fortunately, Virgil will live out his retirement alongside Rozear and her next companion.

Visit the Seeing Eye website for more information about how the organization cares for its dogs and the community they serve.

Those interested in volunteering to raise local Seeing Eye puppies-in-training may contact Shannon Rager by calling (862) 246-5889 or emailing srager@seeingeye.org. 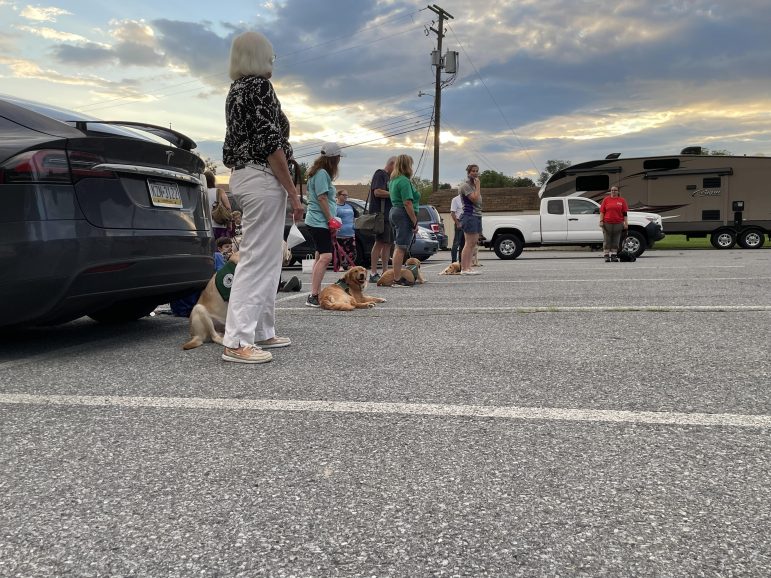