The Southern Lehigh School Board reorganized and met in the high school cafeteria on Dec. 6. This week the board announced that it will hold a special meeting four days before Christmas to discuss possible “alterations” to the district’s health & safety plan, as well as other business. The Tuesday, Dec. 21 meeting will be held at 6:30 p.m. in the cafeteria. District residents who wish to speak during the Visitors’ Comments portion will have to sign up to do so at the meeting.

Changes to the Southern Lehigh School District’s current COVID-19 Health & Safety Plan–including the district’s masking and quarantine requirements for students and staff–could be approved at a special meeting the school board will hold on Tuesday, Dec. 21.

The public meeting will be held at 6:30 p.m. in the high school cafeteria, with a YouTube livestream of it available via a link that will be published on the district’s website.

In an announcement about the meeting published on the website, it was noted that in addition to discussing possible “alterations” to the Health and Safety Plan, the meeting is being held to “conduct additional business as deemed appropriate by the board.”

The announcement neither hinted at what additional business that might be nor indicated what proposed health & safety plan changes will be discussed, although four newly-elected board members ran on a platform critical of the district’s COVID protocols.

Their slate succeeded in ousting incumbent board member Kathleen Parsons, who was joined on the Democratic ticket by Melissa Torba, Glenn Laverty IV and Nicole Dolan; a slate that was more supportive of safety protocols they say are helping to keep students in classrooms.

At the Dec. 6 meeting, Laverty cited a recent increase in the number of cases reported among students and said he believed it was likely tied to the Thanksgiving holiday, when students gathered inside with family members and friends.

“No one in the administration or on the school board is an infectious disease expert,” he said, before asking the board to at least establish guidelines that would mandate a return to mask-wearing if it decides to lift the current mask mandate.

Several district parents who are doctors also asked the board to evaluate the current case data, which Dr. Connie Andrejko said should be where the conversation is focused. 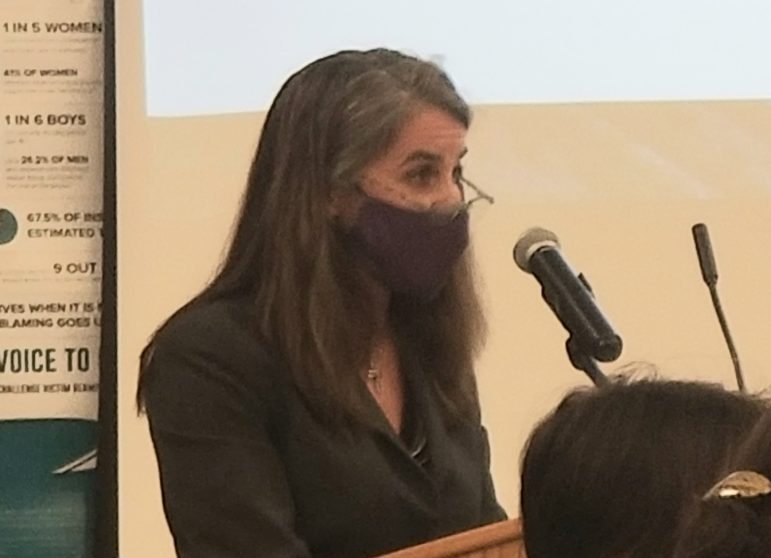 Southern Lehigh parent Dr. Connie Andrejko addressed the board Dec. 6. She urged board members not to change a COVID quarantine guideline and to consider forming a task force that would tie masking requirements to district vaccination rates.

According to the latest case numbers reported in the district’s online COVID dashboard, there have been 71 confirmed cases so far this month. Prior to this month, September had the most confirmed cases so far this school year, with 53 cases spread among the district’s five schools. Almost half of the September cases were at Liberty Bell Elementary School. This month, however, the numbers are more evenly divided among the schools.

Andrejko also asked the board to report aggregate vaccination rates in the district and to consider creating a task force that would tie masking requirements to those rates, and strongly urged them not to consider shortening quarantine requirements.

Other residents’ views echoed those of the candidates who just won election to the board.

Prior to their swearing in ceremony, Dolan addressed the board to claim that the newly-elected members did not all file four campaign fundraising reports as required–or sign waivers that would have exempted them from meeting that requirement–resulting in the accumulation of over $2,600 in late fees which she said remained unpaid to the county.

Dolan said the outstanding fees would have prevented the election results from being certified had the certifications not already been waylaid by a pending lawsuit involving a contested Lehigh County judicial election. The lawsuit is unrelated to the Southern Lehigh School Board race, but has complicated other local school board swearings in.

Under the state School Code, newly-elected board members are to be sworn in during the board’s reorganization, which is mandated to occur during the first week of December.

Both the allegations by Dolan and the fact that as of Dec. 6 the election results remained uncertified because of the lawsuit prompted a lengthy discussion between the five seated board members and the board’s solicitor, who outlined two options by which she said the swearing in could take place that evening.

After being appointed board President Pro Tem and reviewing documents pertaining to the allegations that were presented to the board by Dolan, board member Emily Gehman said she was no longer comfortable conducting the swearing in of the new members, in light of those claims.

“I could be taking away the ability of the county to collect thousands of dollars in debt,” she said.

Board members decided against another option–to vote to appoint the four new members to their seats–because in the event that their election was not certified by the county at a later date, the appointments would remain in effect until the next election.

No one on either side of the debate expressed any doubt about the accuracy of the vote totals recorded by the county in the unofficial results from the Nov. 2 election, all of which showed the four SLAFE candidates winning the seats by a relatively large margin.

Gehman ultimately resigned her Pro Tem appointment, and was replaced by Dimmig, who conducted the swearing in ceremony after several supporters of the newly-elected board members expressed anger over the idea that they might not be seated that night. 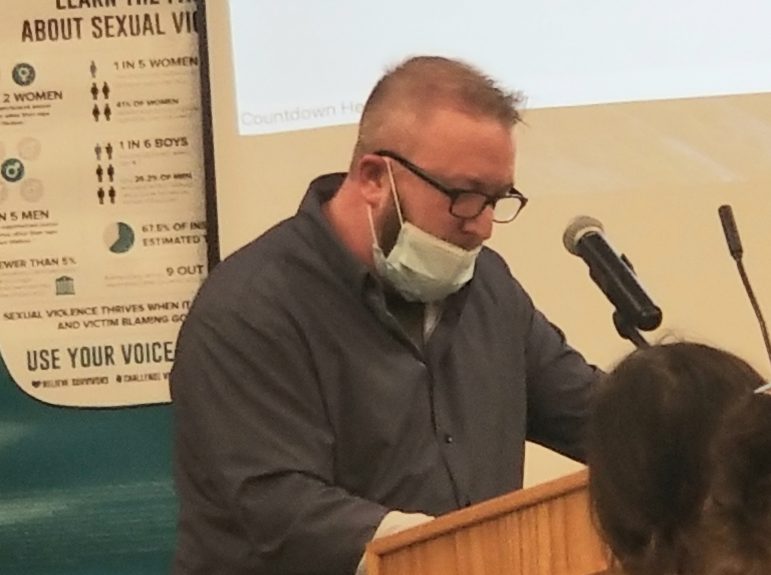 Southern Lehigh School District resident Douglas Durham called any possibility that four newly-elected board members whose election results had not yet been certified by Lehigh County officials would not be sworn in to office Dec. 6 “shameful.”

“This accusation is not enough to keep these four members off the board,” said resident Douglas Durham, who called that possibility “shameful.”

“You have an allegation,” said resident Maria Ault. “It’s not your job to make a decision on that. That should be done in the courts.”

Dolan stood by her decision to share her claims at the meeting, saying, “I simply wanted the board to have all the information, so you can make an appropriate decision.” 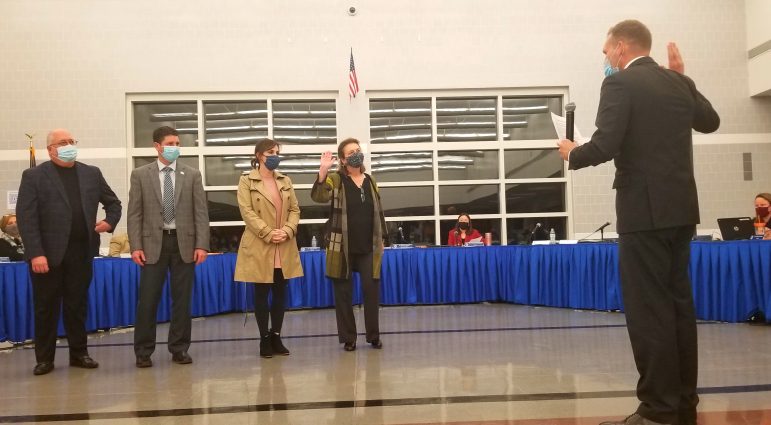 Above, from left, board members Stephen Maund, Dr. Christopher Wayock and Nicole King wait to be sworn in as Mary Joy Reinartz takes the oath of office Dec. 6. Conducting the swearing in ceremony was board President Pro Tem Jeffrey Dimmig.

Following the swearing in led by Dimmig, the first order of business for the full board was to reorganize by electing a president, a vice president and a secretary.

Both Dimmig, an attorney, and Reinartz, who formerly headed the nonprofit human services agency Via of the Lehigh Valley, were nominated for the presidency. After Dimmig cited his commitments away from the board, Reinartz was appointed by a 7-2 vote.

Several of the incumbent board members cited Dimmig’s experience on the board as the reason they felt he was best equipped to help lead the district through ongoing challenges, as well as heal political divisions that have hurt relationships in the community.

The nominees for board vice president were William Lycett and Dr. Priya Sareen, who commented during a discussion about the nominations that “the balance (of power) has now shifted on this board.”

Sareen’s comment proved prophetic when Lycett–who tried to cast himself as an outsider within the board by reminding fellow members that he is a Libertarian–was elected by a 5-4 vote, with all four of the newly-sworn in members voting for him. 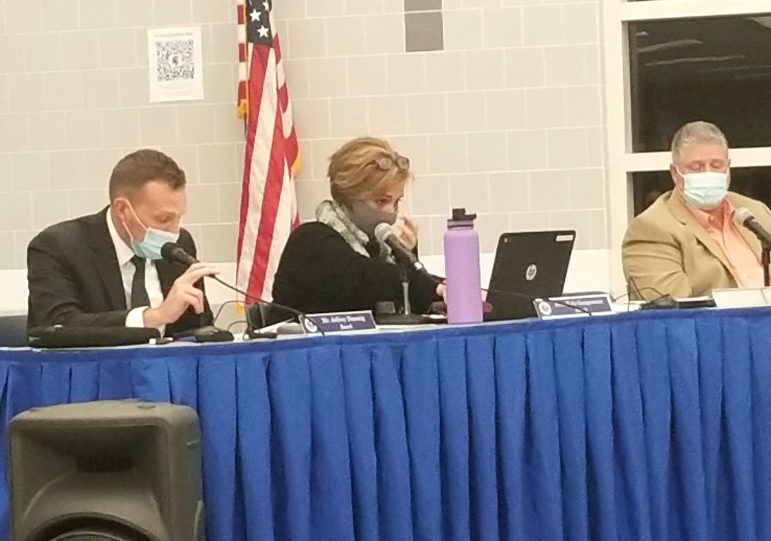 Gehman, who cast one of the four “nay” votes he received, criticized Lycett for what she implied was the hypocrisy of saying he would work to build consensus as vice president, after earlier in the meeting threatening to walk out of the building and leave the board without a quorum after it appeared as though the swearing in might not happen.

After questions were asked about Wayock’s nomination of King to be the board’s secretary, further divisiveness was displayed by the two factions.

“We’re just trying to bring function to the board, and that’s why I nominated Nicole (King),” he said.

“That’s not really collaborative,” Sareen said, in response to his statement.

“I should have chosen my words more carefully,” Wayock–a fellow physician–responded.

King was elected board secretary by a vote of 8-1, with board member Kyle Gangewere opposing the appointment, near the conclusion of the nearly three-hour-long meeting. 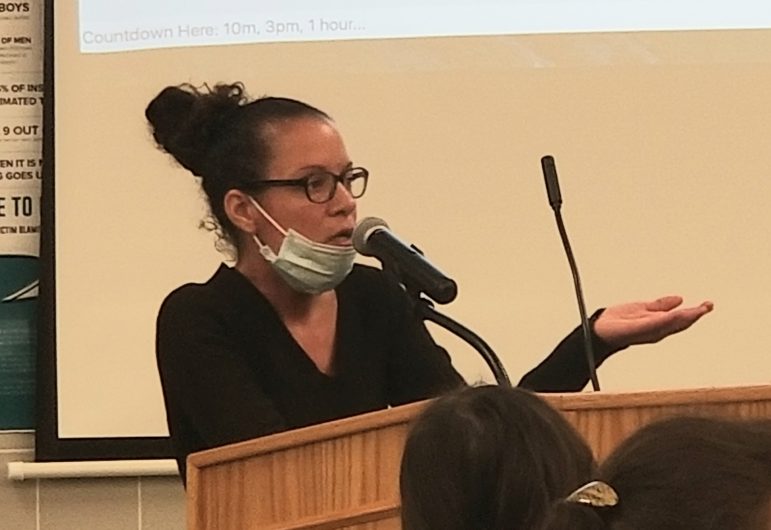 Southern Lehigh School District resident Maria Ault criticized the school board as it discussed how to handle a situation in which four newly-elected members had not yet been certified as the winners of a recent school board race. The four were ultimately sworn in to office at the Dec. 6 meeting.