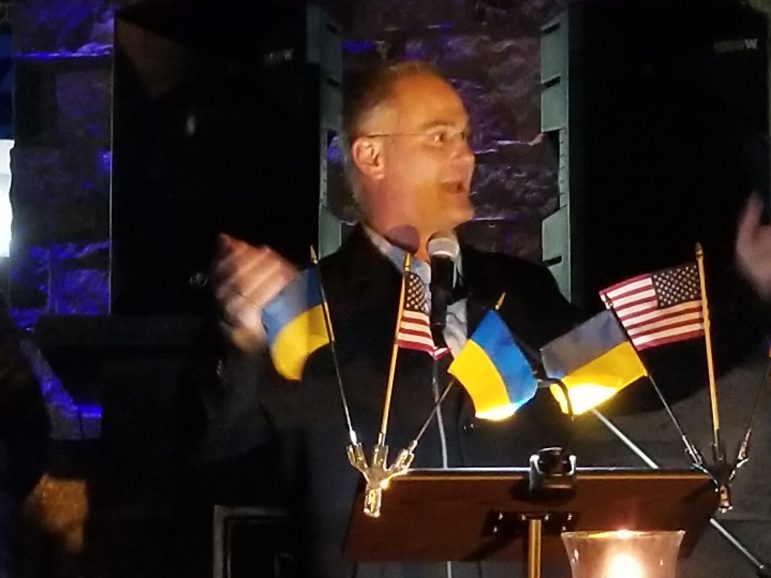 Pastor Phil Spohn of Christ Lutheran Hellertown addresses attendees at a candelight vigil for Ukraine held in Detwiller Plaza Friday. About 100 people attended the service, which concluded with the hymn “Let There Be Peace on Earth.”

Prayer is never a bad idea, particularly when all hope seems lost. And with so many local people feeling hopeless and anxious about the escalating war in Ukraine, a candelight prayer service held in Hellertown Friday evening felt like something that could only help.

About 100 Saucon Valley residents attended the 7 p.m. vigil, which was organized by the Hellertown Area Ministerium and held next to the Detwiller Plaza clock tower.

In addition to prayer, the service featured poetry readings, song and remarks by Bob Pasternak, a borough resident who is currently hosting a Ukrainian exchange student.

Pasternak has hosted six Ukrainian students over the past 30 years, and has tried to keep in touch with them, particularly since Russia invaded their country in February.

His grandparents immigrated from Ukraine to Hellertown in the 1920s, and Pasternak said maintaining the cultural connection has helped pay homage to his and their roots.

“He was from the Crimea and his area was taken over by Russia in 2014 when he was with us,” Pasternak said. “If you are a parent, what do you say to a young man who is laying in bed shaking because his town was invaded by soldiers? I never faced that with my own son. How do you know what to say to someone else’s son?”

Pasternak said his family has tried to stay in touch with Nimko in recent weeks, but he is currently working in Moscow, where “there are reports that policemen…(who) are stopping civilians on the street and checking the social media on their cell phones to see if there are anti-Russian postings or any contact with any questionable individuals.”

“I don’t want to put him in jeopardy so we stopped communicating, but every day I wonder how he is and what he is doing,” he said. 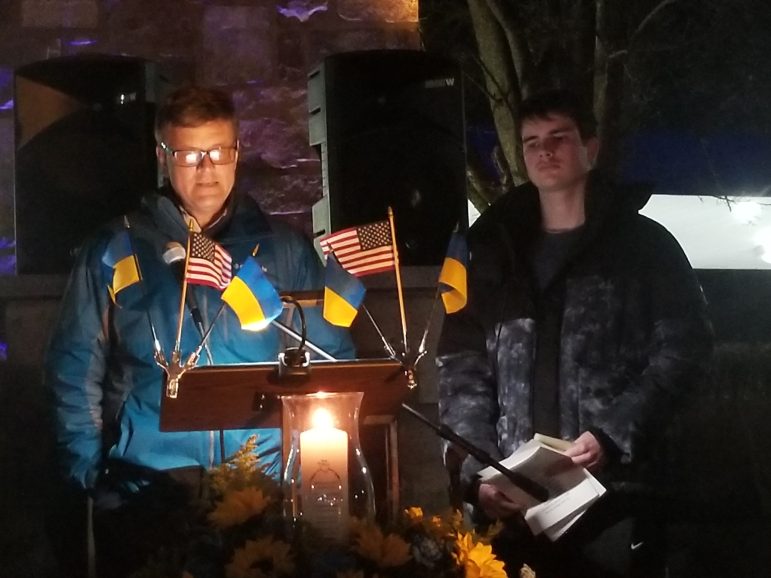 Hellertown resident Bob Pasternak shared information he has gathered from former Ukrainian exchange students he and his family have hosted over the years. Joining him at the service was the student his family is currently hosting, Jack Guniavoi, whose family members have fled toward the west as fighting in Ukraine has escalated since the Russian invasion began. Jack and the other students are part of the U.S. State Department’s highly-selective FLEX (Future Leaders Exchange Program), which Pasternak said helps students from former Communist countries learn about democracy here in the United States.

Pasternak has also helped organize the local collection of clothing, first aid supplies and other items that are desperately needed in Ukraine. Due to an overwhelming outpouring of donations from the Hellertown community, it was announced over the weekend that the collection has been halted, except for donations of winter coats and monetary pledges. Cash or checks made payable to Holy Ghost Ukrainian Catholic Church, which is located in Easton, may be dropped off at the Hellertown Area Library, 409 Constitution Ave., Hellertown, PA 18055. Checks made payable to Ukrainian First Aid may also be mailed to St. John’s UCC, 183 S. Broad St., Nazareth, PA 18064 by March 23.

Additionally, the Saucon Valley High School freshman class is selling sunflower seeds for $1 each as a fundraiser for Ukraine.

“They got the idea from the elderly Ukrainian lady who stood in front of a Russian soldier holding a rifle,” the program for Friday’s candlelight vigil said. “She put sunflower seeds in his pocket and told him, ‘When you are dead these flowers will grow on your grave.'”

The sunflower is also Ukraine’s national flower, attendees at the service learned from Pasternak, who concluded his remarks by declaring “SLAVO UKRAIN!” (“Glory to Ukraine!”)

“We hope all Ukrainians know they are not alone,” said Pastor Phil Spohn, of Christ Lutheran Hellertown, who was one of several Hellertown area clergy to speak at the vigil.

“Our brothers and sisters in Ukraine…are experiencing evil,” he said, with reference to the war that has already claimed the lives of many civilians, including children. “Our hearts are broken.”

“They need our thoughts and prayers,” said Mayor David Heintzelman, who helped organize the vigil. “They’re struggling. They’re hurting. And this is one way of showing support.”

For more information about the collection being led by Holy Ghost Ukrainian Catholic Church and how to support it, Pasternak may be emailed at Htown4Ukraine@gmail.com. 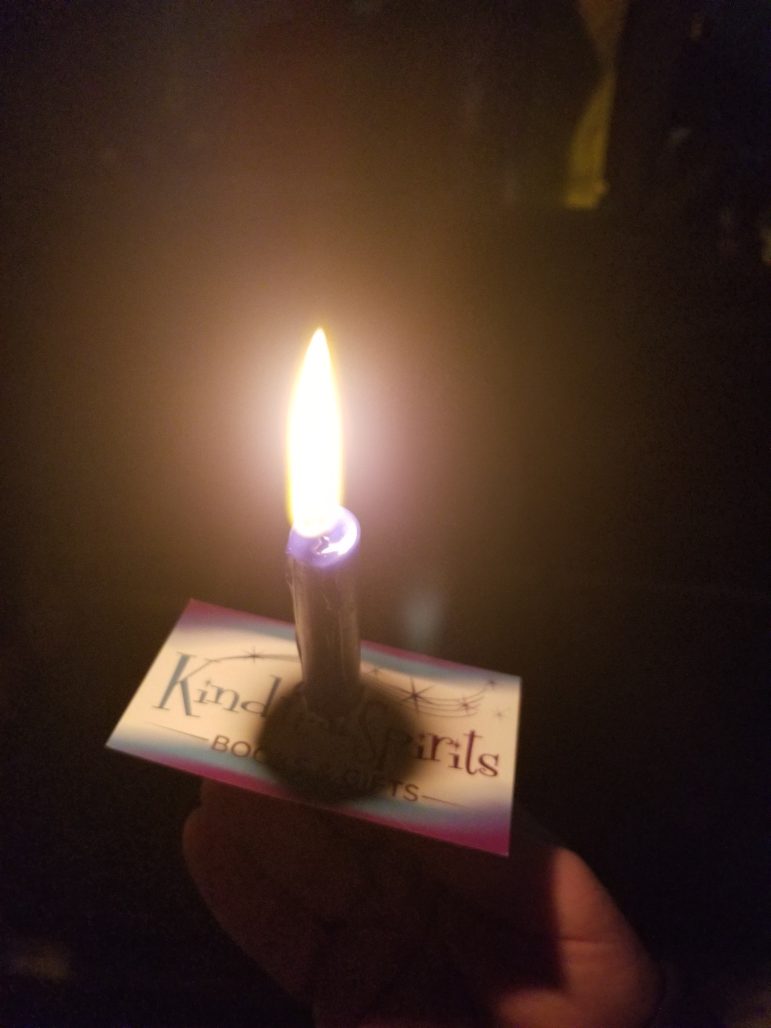 Kindred Spirtis Books & Gifts in Hellertown supplied the blue and yellow candles that were distributed to attendees if they hadn’t brought a candle of their own. Blue and yellow are the colors of the Ukrainian flag. Store owner June Rose recently colored a brick wall outside the store at 66 W. Water Street to resemble the flag and show support for the Ukrainian people. 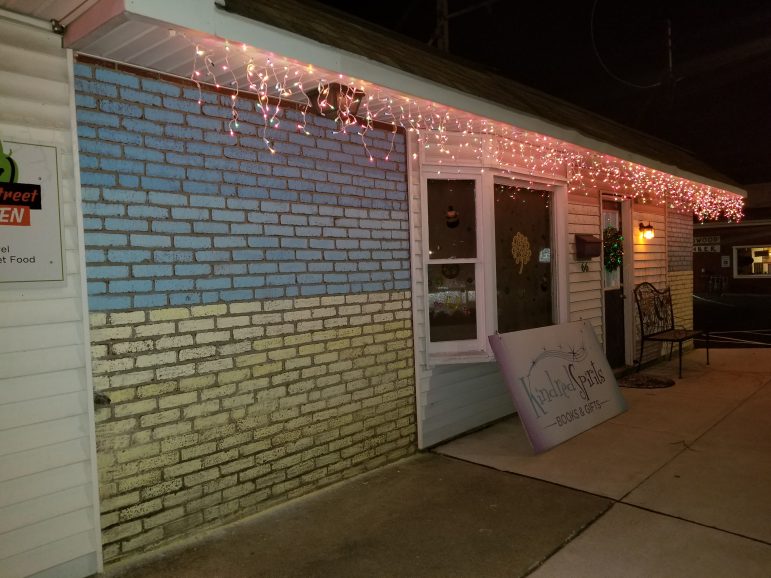 A wall at Kindred Spirits Books & Gifts in Hellertown has been colored blue and yellow to resemble the Ukrainian flag. 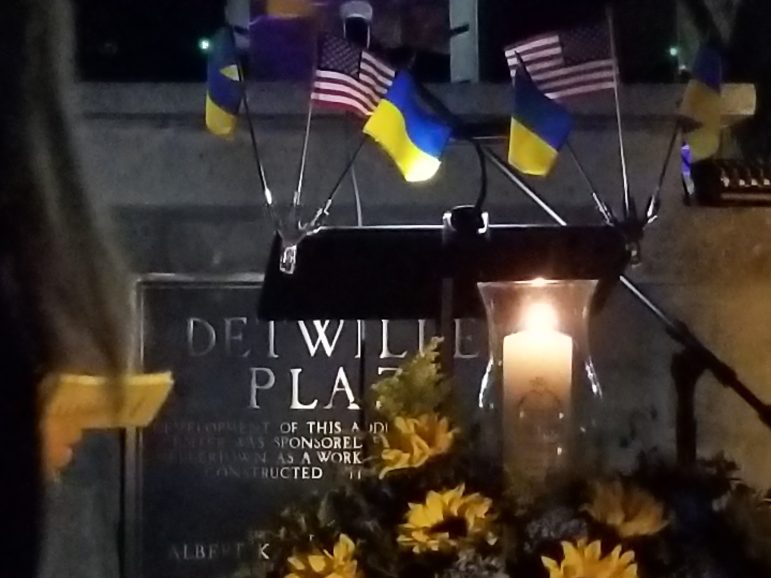 Small American and Ukrainian flags decorated the podium in Hellertown’s Detwiller Plaza, which was the location of a candelight prayer vigil in support of Ukraine on Friday. 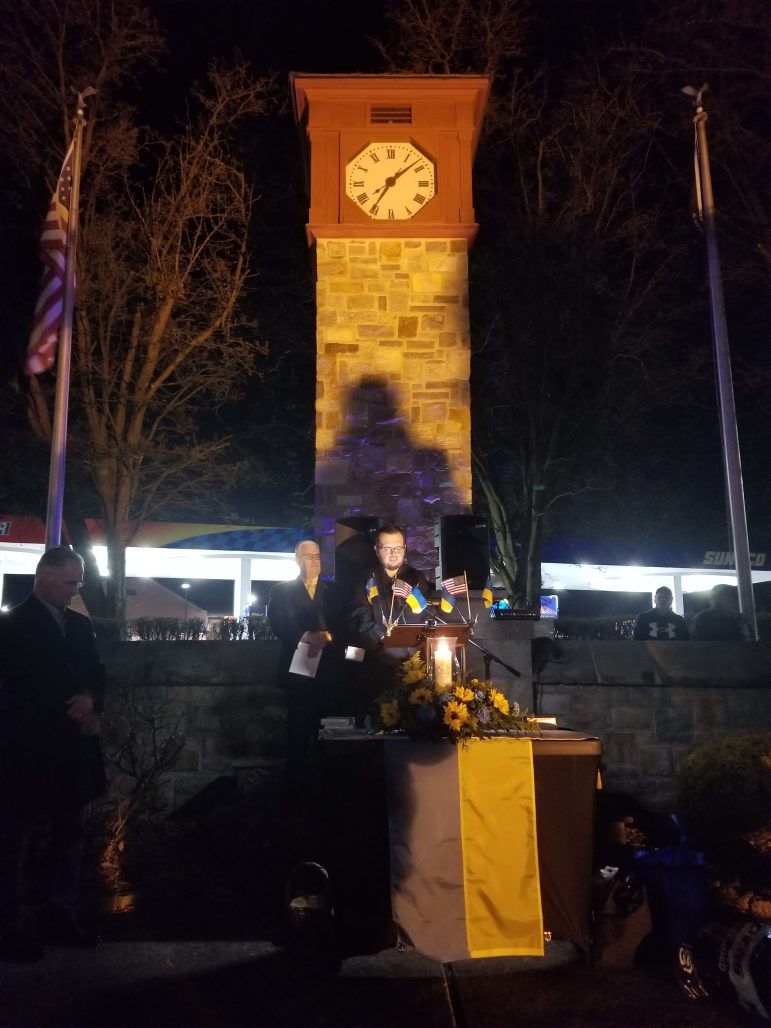 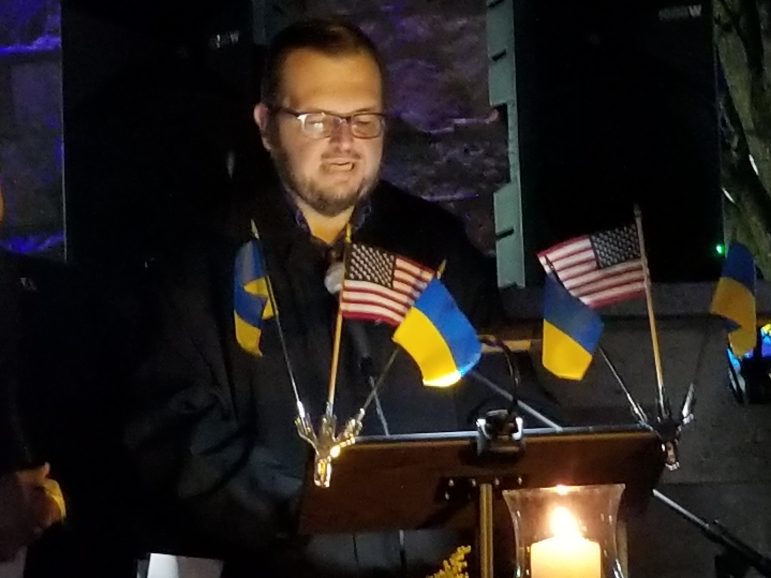 Pastor Joel Risser of First UCC in Hellertown speaks at the candelight prayer vigil for Ukraine. 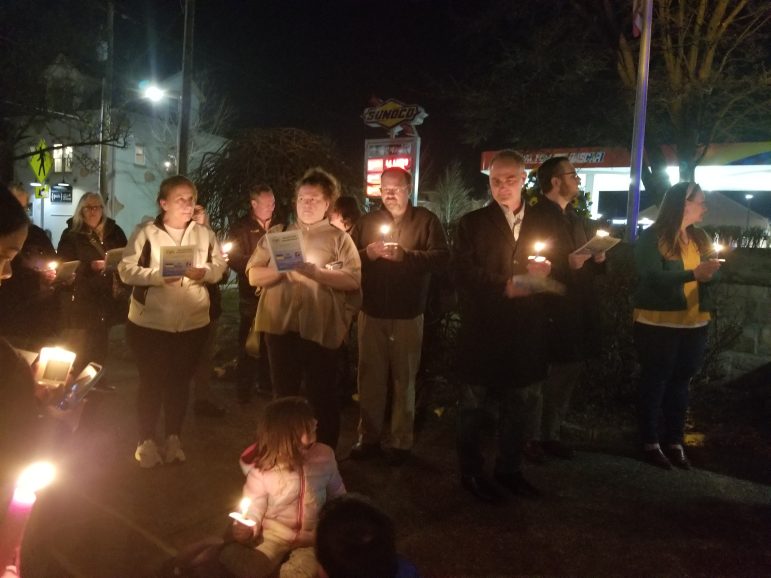 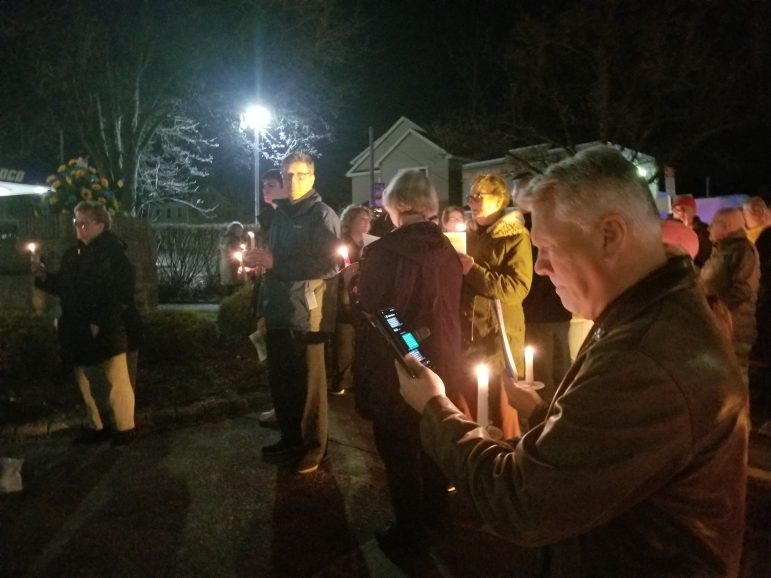 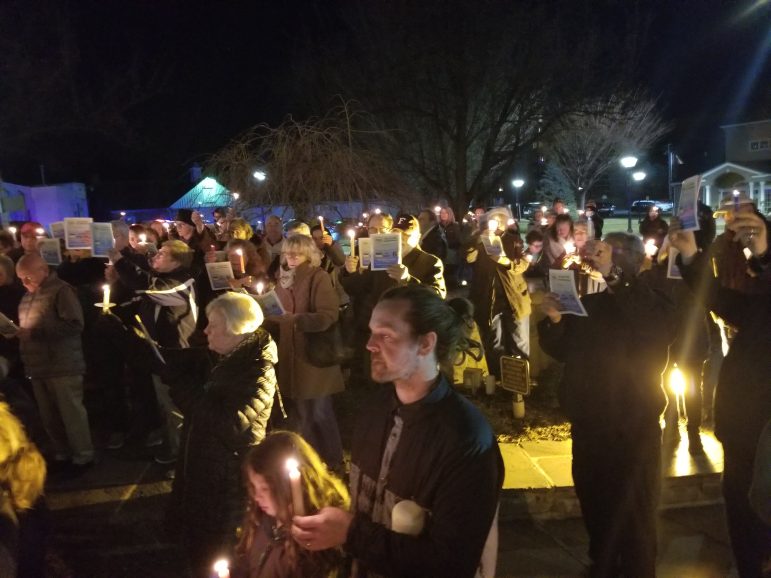 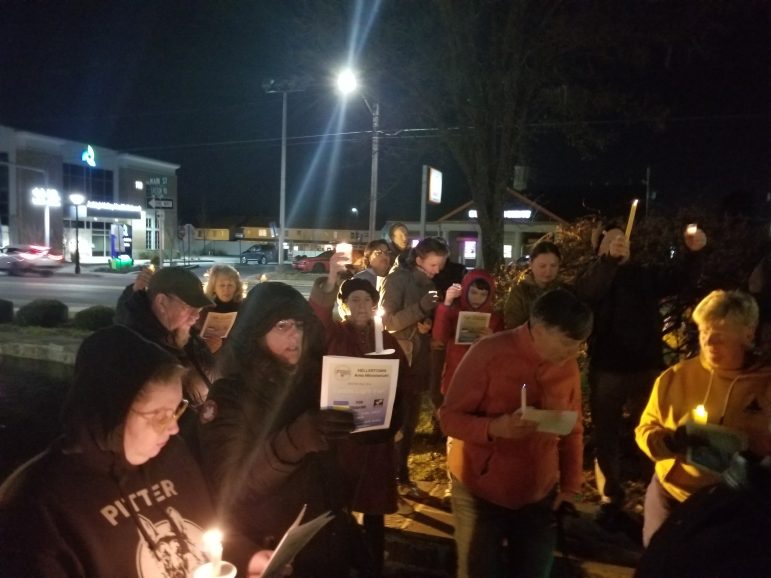 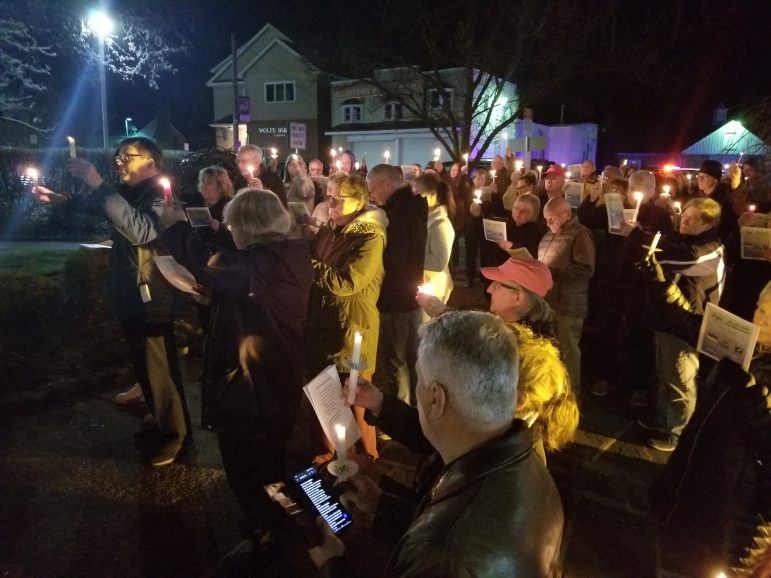