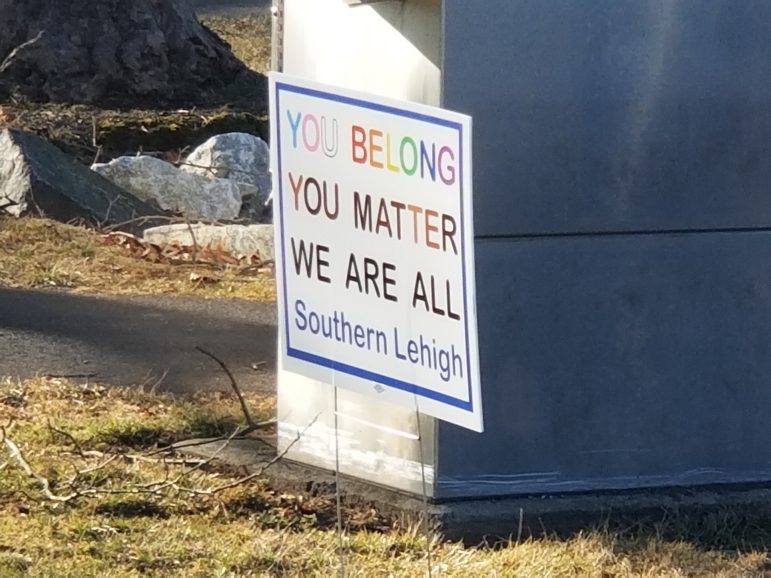 Above: One of the signs developed by Kristen Bruck is located at Preston Lane and Rt. 378, near Southern Lehigh High School in Upper Saucon Township. Although meant to promote tolerance, signs displayed in school classrooms triggered a backlash from parents who view them as inappropriate. That backlash resulted in a proposed policy that could restrict signage in district classrooms if it “can be interpreted to promote a political party, collective bargaining position or divisive community topic and could be deemed to create a distraction to other employees, students or visitors to the building.”

Update: Several readers have shared that they believe the sign that prompted the policy discussion is not the sign produced by parent Kristen Bruck as part of a campaign to promote acceptance in the Southern Lehigh School District, but rather a sign that was reportedly displayed in a district classroom that states: “Women’s rights are human rights, Kindness is everything, Climate change is real, Celebrate diversity, Love is love.”

In the wake of complaints about a sign that promotes tolerance being displayed in Southern Lehigh School District classrooms, the district’s school board is scheduled to discuss a proposed sign policy that would regulate and potentially ban certain signs.

The signs that caused consternation are part of a recent campaign organized by parent Kristen Bruck and promote diversity, equity and inclusion with the following message:

YOU BELONG
YOU MATTER
WE ARE ALL
Southern Lehigh

The signs–which are available for purchase–have mainly been displayed on private property, but were inspired by Bruck’s desire to make Southern Lehigh students from diverse backgrounds feel accepted in school. Bruck is also a teacher in another district.

The decision to consider a policy that could restrict signs like Bruck’s in classrooms was made after district superintendent Dr. Michael Mahon told the board earlier this month that some community members were upset by the message they conveyed; a decision that subsequently generated considerable media attention, both in the local area and beyond.

Bruck said the publicity has helped spur similar campaigns in other nearby school districts, and will likely draw a number of speakers to Monday’s school board meeting.

The draft version of the sign policy Bruck and others are expected to comment on states that “signage, photographs, decorations or other items displayed by any employee which can be interpreted to promote a political party, collective bargaining position or divisive community topic and could be deemed to create a distraction to other employees, students or visitors to the building, may be removed.”

It also states that “signage, photographs, decorations and any other item in or on school district property or buildings displayed by any employee should promote the Southern Lehigh School District’s core mission of learning, serving and leading and be in compliance with nondiscrimination, anti-bullying, harassment and hazing laws, regulations and policies.”

The initial decision about whether a sign may be displayed or not would be made by school principals, but the superintendent would have the final say on whether or not a specific sign is in compliance with the policy or not.

The full text of the proposed policy the school board will consider may be viewed here.

The board meeting will take place at 6:30 p.m. Monday, March 28 in the high school board room and online via a YouTube livestream that may be accessed via the district’s website. The agenda for the meeting may be viewed here.