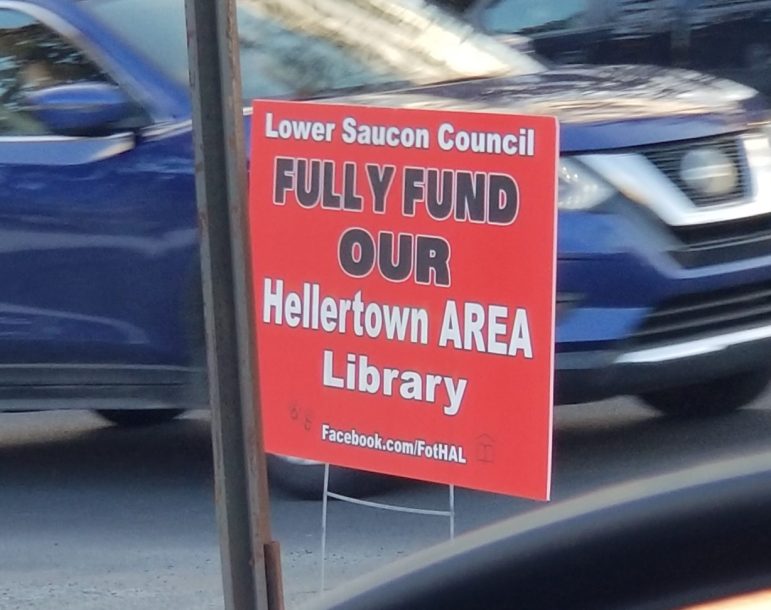 Yard signs urging Lower Saucon Township Council to “fully fund our Hellertown Area Library” are on display around the township. The signs are for sale as part of a fundraiser conceived by the Friends of the Hellertown Area Library, which printed them in the wake of dispute over a library services agreement that began earlier this year. (FILE PHOTO)

After failing to get a proposal for a short-term library services agreement on Lower Saucon Township Council’s March 16 meeting agenda on short notice, the Hellertown Area Library board of trustees recently voted to repeat the offer–and extend the deadline attached to it–by requesting that it be discussed by council at their meeting April 20.

The proposal calls for Lower Saucon Township and the Hellertown Area Library Association to enter into a written agreement under which the library would continue providing free library services to township residents on the same terms and conditions previously in effect under an agreement that expired Jan. 31. In return, the township would agree to continue to provide financial support to the library through 2022.

The proposal also opens the door to a possible further extension of the agreement, which it specifies would “take effect on Jan. 1, 2023 (and) must be in place by July 1, 2022.”

“Should no future agreement be reached the Library would, when completing its request for state funds to be received in 2023, seek to have the Township removed from its library direct service area,” the proposal states.

At the heart of the current funding dispute that has confused and confounded many Saucon Valley residents is council’s 4-1 decision in January to reject a new five-year library services agreement with the HAL in lieu of offering the library a one-time $50,000 donation; an amount that represents about half the annual amount the library would have received under the original agreement proposal, and one which numerous township residents have protested at subsequent meetings and in letters.

Library board president Ken Solt said Monday that in spite of the fact that the board previously voted to reject the township’s donation, last week the library received a check from Lower Saucon Township for $41,644.67; an amount which reflects a deduction for library services the township paid for in January as part of their agreement extension.

Solt said the board will “not be accepting that money” as it continues its efforts to try and reach a compromise on a new agreement with Lower Saucon Township Council, with assistance from officials with the Office of Commonwealth Libraries.

Previously, Solt reported that the situation involving HAL and the township is unprecedented in the history of the state library office, which has extended the timeline for a possible resolution to be found. State Rep. Bob Freeman (D-136), who represents Hellertown borough and part of Lower Saucon Township in Harrisburg, has been involved in the talks many township library patrons continue to hope will bring an end to the months-long disagreement that also produced a falling-out with Hellertown officials.

In the wake of Lower Saucon Township Council’s decision not to enter into a new agreement with the HAL in January, Hellertown Borough Council voted to adopt a new agreement with the library, which was approved in late January. The borough also approved $75,000 in emergency funding for the library, which at present continues to serve Lower Saucon Township residents in spite of a lack of funding by the township.

It remains unclear what will ultimately happen if Lower Saucon Township Council rejects future agreement proposals put forth by the library board. Council members have claimed the HAL must continue to serve township residents, and the library is currently operating using state funding allocated last year and calculated under the assumption that the township would remain part of the library’s home service area this year.

In the future, if the state determines that the township is no longer part of the library’s home service area, township residents would then be able to purchase a library card to use at the Hellertown Area Library, Solt said. However, he added that the card would only be for use in Hellertown, and thus would not provide Lower Sauconites with access to other state-funded libraries via the PA Access program.

“At that point, they would have no home library,” he said of township residents.

Complicating matters further is the threat of a lawsuit that has hung over Hellertown Area Library officials since January, when Lower Saucon Township Council voted 4-1 to authorize initiating a lawsuit against the library if township residents are denied access to its programs and services. In spite of calls from residents to rescind that vote, council has kept it on the table, with councilman Tom Carocci referencing the possibility March 16.

A council vote to donate $50,000 to the Southern Lehigh Public Library in January resulted in a public statement by SLPL officials in which they said the disagreement between the township and the HAL is “not their fight.”

Carocci said SLPL officials have not declined to accept the township’s donation. In that statement, SLPL board president Bruce Eames said “there have been reports of a possible financial donation being offered by Lower Saucon Township to the Southern Lehigh Public Library, but no action has been taken and we believe this is ‘on hold.'”

In response, township resident and Saucon Shenanigans council blogger Andrea Wittchen–who has been streaming the meetings via her site’s Facebook page–said she believed Carocci was wrong.

“Secondly, Mr. Carocci loves to claim that it’s still ‘on hold’ with the Southern Lehigh Public Library,” Wittchen continued. “It’s not on hold. They clearly stated, ‘We have no interest in shopping our services to other municipalities or organizations.’ He claims that they said it was on hold. What Mr. Eames said was, ‘We never received anything from Lower Saucon and we assume it’s on hold.’ If it was on hold as far as Southern Lehigh was concerned, they wouldn’t have to assume anything. They would know it.”

Other residents who spoke during the meeting’s public comment period for non-agenda items also voiced displeasure over council’s actions–or inaction–regarding the HAL.

“I’m having great difficulty believing that it really can be taking this long to resolve the situation with the Hellertown Area Library,” said resident Joellen Thomson. “Our township has appeared secretive and does not inform residents of exactly what their concerns are and how they plan to resolve these concerns in order to finalize an agreement.”

“It is extremely embarrassing to be a Lower Saucon resident using the Hellertown library and not being able to justify why our council does not feel that they should pay for these services,” Thompson added.

“We continue to show up because this still matters to us. Your constituents are watching, our kids are watching,” said resident Erica Shorb, who highlighted a youth-led bake sale fundraiser for the HAL in the township last month that netted more than $2,000.

“Your budget can clearly handle offering an increased level of support for this community treasure,” Shorb said.

“Please put the library on the agenda for April 20,” urged resident and Friends of the Hellertown Area Public Library vice president Jessica King.

The full text of the HAL agreement proposal issued earlier this month was read into the council meeting record March 16 by councilwoman Priscilla deLeon, who has supported the calls by residents for a new agreement between the township and the library, and who voted against the council motion to approve the $50,000 donation in January.

The Wednesday, April 20 meeting will be held at 6:30 p.m. at Lower Saucon Town Hall, 3700 Old Philadelphia Pike, Bethlehem. A draft meeting agenda for council meetings is typically posted on the township’s website the Friday before the meeting is held.

Public comment on both agenda and non-agenda items is reserved for township residents only, with the non-agenda comment period occurring at the end of the meetings.

Additionally, under new rules for meeting agendas council adopted in January, council members must “present a written request to the Township Manager, with sufficient detail to describe the item, at least 7 calendar days prior to the date of the meeting.” A request must also “be accompanied by the assent of one other Councilperson to the request.”