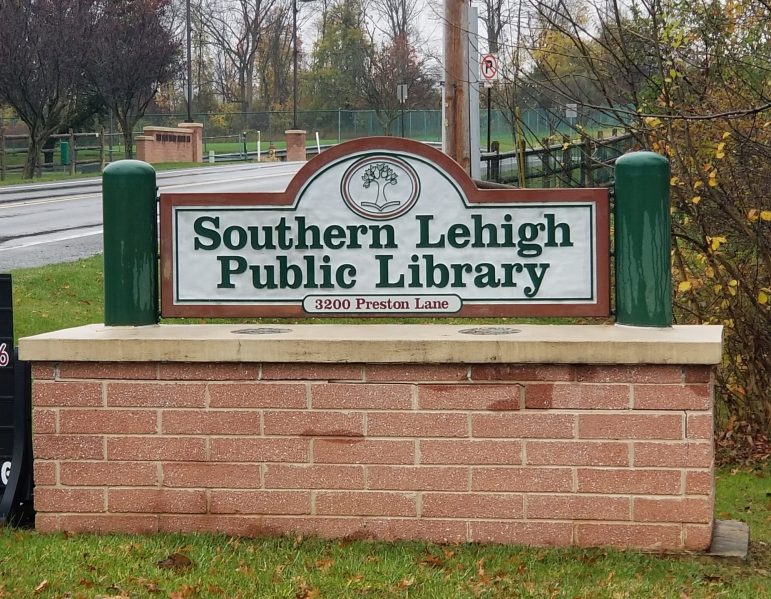 The Southern Lehigh Public Library is located at 3200 Preston Lane in Center Valley. The library receives financial support from the three municipalities that make up the Southern Lehigh School District–Upper Saucon Township, Coopersburg borough and Lower Milford Township–as well as from the district. (FILE PHOTO)

After remaining silent for weeks, the members of the Southern Lehigh Public Library Board of Directors issued a statement Tuesday regarding the ongoing kerfuffle involving Lower Saucon Township and the Hellertown Area Library into which they’ve been drawn.

The statement disavowed any involvement by the board in a decision by Lower Saucon Township to reject a new 5-year agreement with the Hellertown Area Library last month and instead issue $50,000 donations to both the HAL and the SLPL, which the voting majority on council said were to help secure library services for Lower Saucon residents.

“This is not our fight, and we’ve made that clear every time we’ve met with either party,” said Southern Lehigh library board president Bruce Eames, reading from the statement.

“Frankly, we do not want to be involved in this fight, and have made that very clear…on several occasions,” it stressed.

The statement also clarified that SLPL does not intend to “shop” its services to other communities, since its service area of Upper Saucon Township, Coopersburg borough and Lower Milford Township “has worked very well for very many years.”

Eames said no action was taken by the board on the donation from Lower Saucon Township, which the SLPL board believes is now “on hold.”

SLPL board secretary Kathie Parsons stressed that there was never any meeting between the board and Lower Saucon Township.

“I just want to make that clear,” she said.

Lower Saucon councilwoman Priscilla deLeon was an attendee at the meeting on Zoom and asked about a $50,000 check Lower Saucon Township issued last month, which was written to the Southern Lehigh Public Library and subsequently voided.

Eames said that based on his knowledge of discussions between library representatives and township representatives it did not surprise him that the check had been voided.

SLPL director Lynnette Saeger later clarified that a check was never received by the library, either.

“I really appreciate your transparency, and thank you so much for having this on your agenda and letting us speak,” deLeon told the board.

Whether that will happen before an extension of HAL library services for Lower Saucon Township residents ends on Feb. 28 remains to be seen.

The only meeting of Lower Saucon Township Council this month is scheduled to be held Wednesday, Feb. 16 at 6:30 p.m. at the township building, however there is no discussion of library services on the agenda; an omission deLeon criticized in a recent letter.

Due to recent changes in the public comment policy for council meetings, a Facebook post on the Friends of the Hellertown Area Library page noted that “this means we’ll have to wait until the end of the meeting to have our voices heard.”

“We suggest bringing some reading material from the library!” the Friends added.

The meeting will not be livestreamed by Lower Saucon Township, but township blogger Andrea Wittchen has said she will carry a live feed of it on her blog’s Facebook page.

Click here to view the updated Lower Saucon Township Council meeting agenda, which includes a discussion about authorizing the appointment of interim township manager and the formulation of a search committee under Personnel-Related Items.

Eames said the statement issued by the Southern Lehigh Public Library board of directors would be posted on the library’s website on Wednesday.