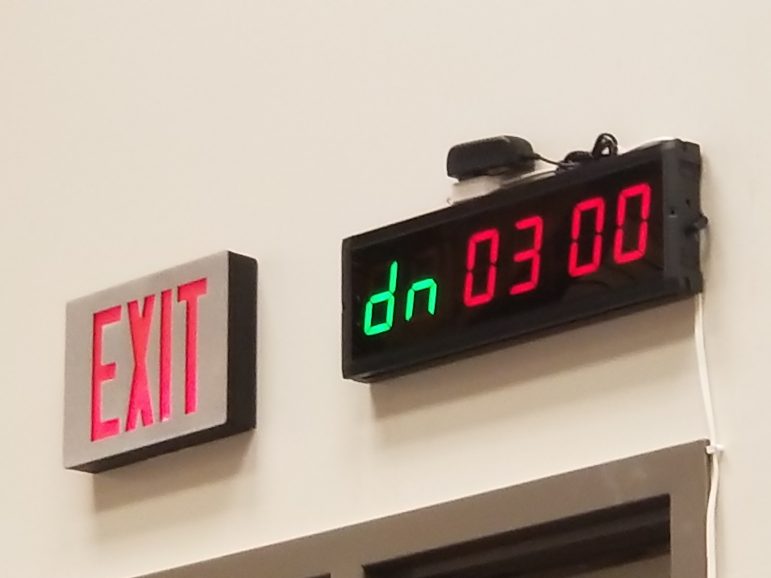 About a dozen Lower Saucon Township residents asked township council members not to adopt more restrictive public comment rules for their meetings Monday night, but the majority on council was not swayed by their concerns.

“It’s not to stifle public comment,” responded councilman Jason Banonis, an attorney who drafted the updated agenda policy and meeting code of conduct, and earlier had been sworn in to a new term in office. Banonis was then elected president of council during a reorganization meeting. “We are strong advocates of free speech,” he said.

“We also are advocates of conducting ourselves in an orderly manner,” Banonis continued, adding that the updated policy he introduced in the form of a resolution is “to allow us to conduct our meetings in an orderly way.”

Councilwoman Priscilla deLeon, who cast the sole dissenting vote on the resolution, disagreed.

DeLeon–the only Democrat on council–took issue with a change which means only township residents and taxpayers will now be able to address council at meetings.

Citing the township’s Code of Ordinances, she said there is no specificity regarding a citizen’s place of residence, with the code instead referring to meeting attendees simply as “interested citizens.”

“We’re a community in the Saucon Valley,” deLeon said, noting that the township and the borough of Hellertown share a school district. “We shouldn’t look at boundary lines.”

“Residents and taxpayers are citizens of Lower Saucon Township,” said Banonis, citing the wording of the new agenda policy.

“To me, interested citizens and residents and taxpayers are two different things,” deLeon said. “I’m really bothered by this whole thing. I can’t support it.” 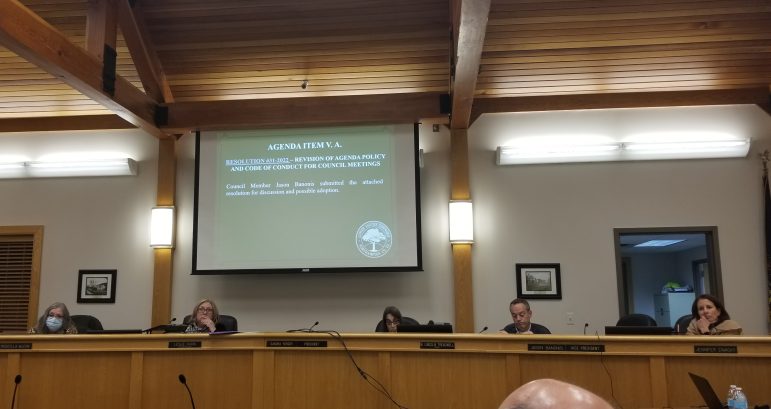 Lower Saucon Township Council voted 4-1 Monday to adopt a new agenda policy and code of conduct for meetings. Voting for the resolution were council president Jason Banonis, vice president Jennifer Zavacky, councilwoman Sandra Yerger and councilman Tom Carocci, who participated in the meeting via telephone. Voting against it was councilwoman Priscilla deLeon.

The new agenda policy will also potentially make it harder for council members to add discussion items to meeting agendas by requiring them to “present a written request to the Township Manager, with sufficient detail to describe the item, at least 7 calendar days prior to the date of the meeting,” according to the resolution. The request must also “be accompanied by the assent of one other Councilperson to the request,” meaning that if no other council member will co-sign the request, the matter can only be brought up during an informational report each councilperson is entitled to give at the end of each meeting.

Banonis said non-residents with questions regarding township matters may address their concerns to the Saucon Valley Partnership; a council of governments comprised of representatives from the township, the borough and the Saucon Valley School District.

In lieu of that, he said they may email council members directly or contact Township Manager Leslie Huhn if they have a question or concern.

He said the township council solicitor, Linc Treadwell, had reviewed the draft resolution and seen “no issues of legal concern.” Treadwell was not present for the discussion about it, arriving at the meeting shortly after council adopted the resolution and explaining as he did so that he was late because he had attended two other reorganizational meetings.

None of the suggestions or explanations that were made appeared to sway members of the public who spoke against the new policy, which, among other things, means residents and taxpayers can no longer comment on individual agenda items as they are discussed by council.

> >Do you value our reporting? Show your support for it by becoming a Saucon Source member today!

Resident Noelle Kramer told council that with participation in local government meetings already low, “as community leaders you should be encouraging citizens to be involved.”

“We should be able to ask questions and make comments after you’ve had your discussion,” she said. “It’s almost as if you should just proclaim your rulings and be done with it. You don’t want to hear from the people you claim to serve and I don’t understand that. The people are supposed to be part of the process, and not an inconvenience to the process.”

Kramer is the director of the Hellertown Area Library, which is currently seeking approval of a new five-year funding agreement from Lower Saucon Township Council; a matter that at times became contentious during a council meeting discussion last month. 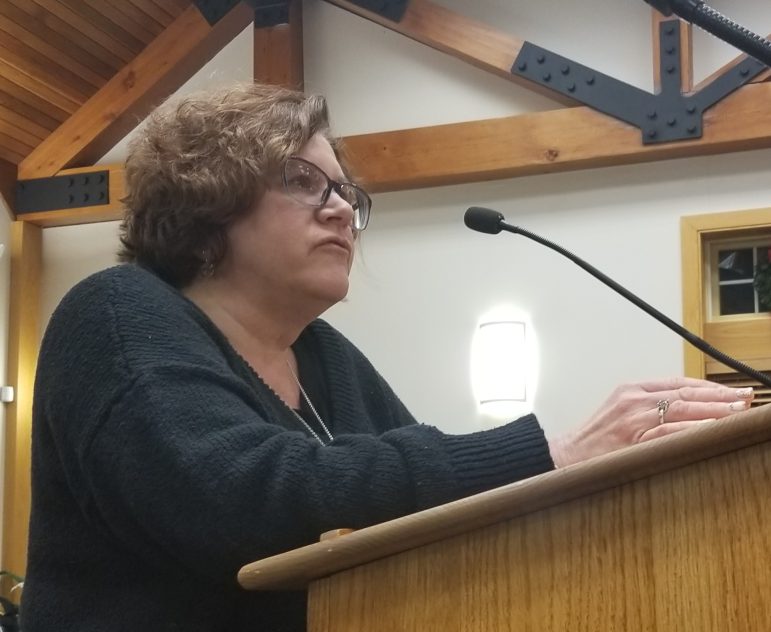 Future discussions may be impacted by the implementation of the new policy, since Hellertown residents–including, for example, library trustees who live in the borough–will no longer be eligible to address council with regard to the proposed agreement.

Resident and former council member George Gress, who lost a bid to return to council in November, also voiced displeasure at the udpated comment policy and code of conduct.

After newly-sworn in council vice president Jennifer Zavacky sought clarification about one of the policy’s 26 rules, which resulted in a minor change in how it was worded, Gress told council the resolution should be readvertised and voting on it delayed.

Councilman Tom Carocci–who was participating in the meeting via speakerphone–responded to Gress’s concern by telling him the change only involved a clarification.

“OK, Tom, it was a clarification, but what about the next time?” Gress asked.

“It’s just a move to stifle public comment,” he said of the policy, adding that the township’s 11,000 residents “all deserve a fair right to speak.”

Hunter Gress, a student at Saucon Valley High School and George Gress’s son, said the comment policy at township council meetings will now more closely resemble that which is in place for Saucon Valley School Board meetings; a policy he called “very limiting.”

“You are really, really walking on a thin rope here on your view of the Sunshine Law,” former council candidate and attorney Victoria Opthof-Cordaro told the majority on council. “It’s incredible to me that after all these years…all of a sudden now this has become your decision, that you don’t want to hear what people have to say.”

Township resident Barrett Geyer also criticized the proposed resolution before it was passed, telling Banonis, Carocci and Zavacky that as a registered Republican who voted for them in November, he could not support a resolution that includes language such as the following: “Members of the audience may not address other members of the audience, or argue, speak or yell back and forth at or to each other.”

Geyer paraphrased that rule, saying it amounted to council decreeing that “members of the audience may not speak to each other.”

He also highlighted the last rule included as part of the policy, Rule #26, which states:

The purpose of Public Comment shall be for residents or taxpayers to comment on matters of concern, official action, or deliberation which are or may be before the Council prior to official action being taken. Council will not respond to comment made during the public portion of the meeting unless it is necessary to ask a clarifying question, correct a factual error, or provide specific information. The purpose of Public Comment is not for residents or taxpayers to engage in argument or debate with members of Council, the Administration, or other residents, and the Council President shall maintain order in accordance with such purpose.

Geyer repeated the first part of the last sentence and then told council, “respectfully, that’s exactly what public comment is for.”

“I’ve listened to the transcripts of your meetings,” township resident Jessica King said, after telling council members “please do not limit (comments).”

“We’re all going to be listening a little closer, because you all have a better job that you can be doing, and please do it,” she added.

The next Lower Saucon Township Council meeting will be held Wednesday, Jan. 19 at 6:30 p.m. at Lower Saucon Town Hall, 3700 Old Philadelphia Pike, Bethlehem. Meeting agendas as per the newly-adopted policy will be available at least three days before the meeting commences, both on the township’s website and at the township building.

To view a copy of the draft version of the resolution that was adopted Monday night, refer to pp. 48-52 of Monday’s agenda on the township website. The less elaborate policy that was replaced–which was adopted in April 2020–may be found on pp. 53-54.