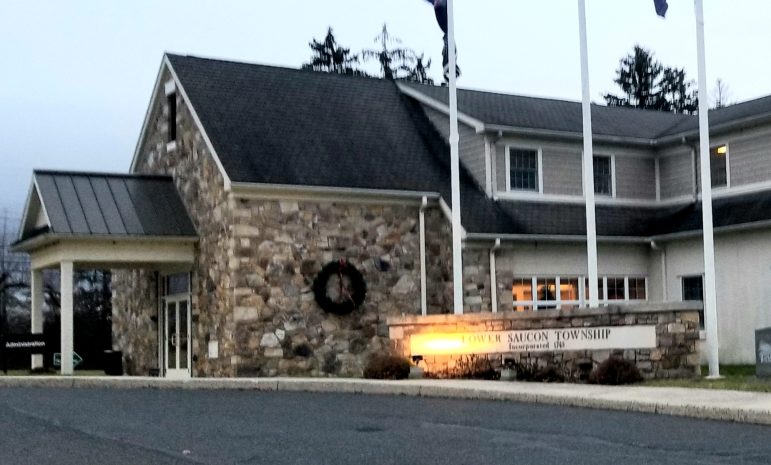 Lower Saucon Township Council is set to consider additional restrictions on public comment at council meetings. The restrictions are part of a proposed agenda policy and code of conduct resolution that will be discussed and possibly adopted at council’s Jan. 3 business meeting, which is open to the public and will be held at Lower Saucon Town Hall (pictured above), 3700 Old Philadelphia Pike, Bethlehem at 6:30 p.m. Council’s annual reorganization meeting will be held first.

Proposed changes to the agenda policy and code of conduct for Lower Saucon Township Council meetings which will be discussed by council Monday night could further limit how residents participate in meetings in the future and determine whether most non-residents have the opportunity to participate in them at all.

The proposed changes are included in a draft resolution, Resolution #31-2022, which is included with the agenda for Monday evening’s business meeting. That meeting will immediately follow township council’s reorganization meeting, at which two recently re-elected members of council and one newly-elected member will be sworn in to office.

According to the draft agenda documents, Resolution #31-2022 was submitted for discussion and possible adoption by councilman Jason Banonis, who along with councilman Tom Carocci was re-elected to a four-year term in November. Resident Jennifer Zavacky was elected to a two-year term as part of the same Republican ticket.

The preamble to the proposed agenda policy and code of conduct resolution says it is being considered by a council that “is (a) strong advocate of free speech and wishes to promote an atmosphere of reasoned expression of ideas.”

However, the proposed resolution would add a number of restrictions to council’s current meeting agenda/conduct policy, which was adopted less than two years ago.

One of the most signifcant of the proposed changes to the current policy calls for limiting public comment to two periods during council meetings: one period for agenda items at the start of meetings, and one for non-agenda items at the end of each meeting.

Currently, members of the public also have an opportunity to comment on matters as they come before council, during a discussion period set aside for each agenda item.

“Public participation, including public comment, will not be allowed after the commencement of the Council’s business meeting or during any other Agenda item,” the draft resolution states.

There is currently a three-minute time limit for comments which would remain in effect under the proposed resolution, with the council president or acting president given the discretion “to expand the individual comment period by no more than two minutes upon request from the individual.” According to the draft resolution, “thereafter, additional time may be allowed only upon motion approved by a majority of council;” proposed language that is similar to that of the current policy concerning time allotments.

The proposed agenda policy and code of conduct resolution council is set to debate Monday would differ from the current policy, however, in that it would further limit comments based on whether they are considered “substantive” or not.

“Comments should be substantive and not include any defamatory content and/or personal attacks on the integrity of others whether or not present,” it states.

If adopted, the proposed resolution would also largely prevent anyone who is not a township resident or taxpayer from speaking at council meetings, as both comment periods during meetings would be reserved only for residents and taxpayers.

“Public comment shall be made only by Lower Saucon Township residents and taxpayers,” the resolution states.

This represents another difference from the current policy, which provides non-residents an opportunity to address council at the end of meetings under Non-Agenda items.

If adopted, that particular restriction could limit who can express their views on a variety of subjects, including multi-municipal matters such as a five-year agreement with the Hellertown Area Library that was recently before council. That agreement was the subject of a lengthy discussion at council’s Dec. 1 meeting, during which Hellertown borough residents who are library board trustees addressed council; something that may no longer be possible if the proposed agenda policy and code of conduct are adopted.

To read about the library agreement discussion, refer to pp. 11-20 of the Dec. 1 draft meeting minutes, which are available on the township’s website.

Because council did not approve the new agreement Dec. 1 and the current agreement expired Dec. 31, concerns were expressed at that meeting that township residents might not be able to use the Hellertown Area Library–or any other public library–as of Jan. 1, 2022, due to a state regulation that stipulates that access to library services in other communities is dependent upon whether the municipality “supports a state-aided public library for its residents (as outlined in the Pennsylvania Public Library Code).”

Saucon Source sought clarification about Lower Saucon Township patrons’ status at the Hellertown Area Library as of Jan. 1 from library director Noelle Kramer, who provided the following statement on Saturday:

The full text of the draft resolution–which would also further codify how agendas are distributed in advance of council meetings as well as how council members may add items for discussion to meeting agendas–is below and may also be found on pp. 48-52 of the agenda for the Jan. 3 business meeting, which will begin following the reorganization meeting at 6:30 p.m. The current agenda and public comment policy may be found on pp. 53-54 of that document. Monday’s meeting–which is open to the public–will be held in Lower Saucon Town Hall, which is located at 3700 Old Philadelphia Pike, Bethlehem.

Further Reading: A Lower Saucon Township resident who regularly blogs about township council, Andrea Wittchen, has also written about the potential impact of the proposed resolution’s adoption in a new post, “You’re About to Be Muzzled.” 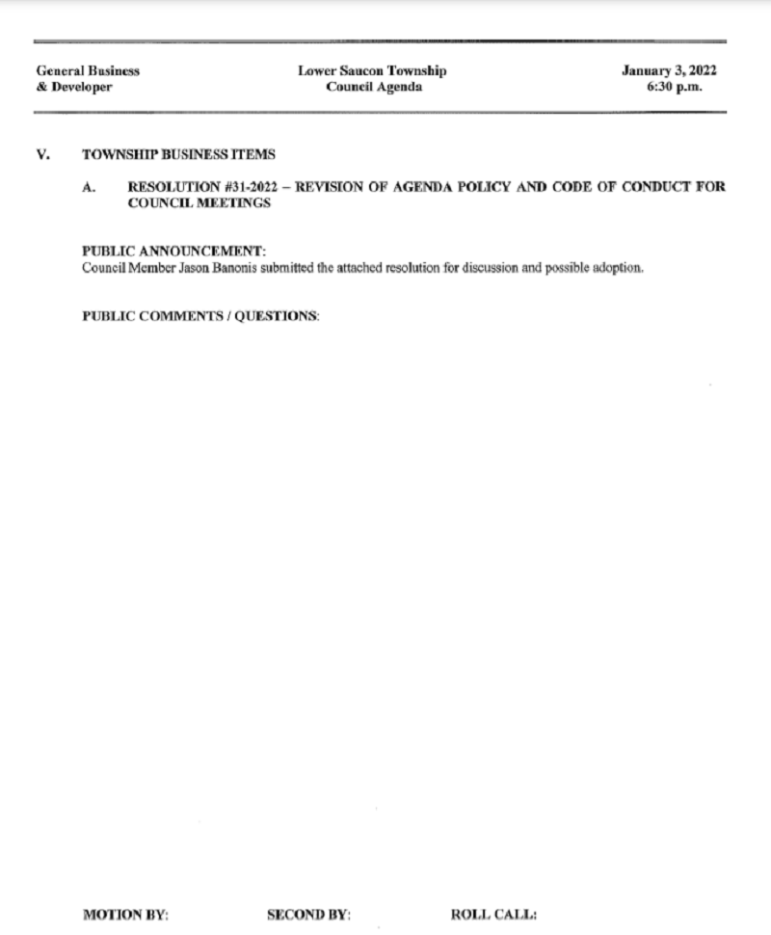 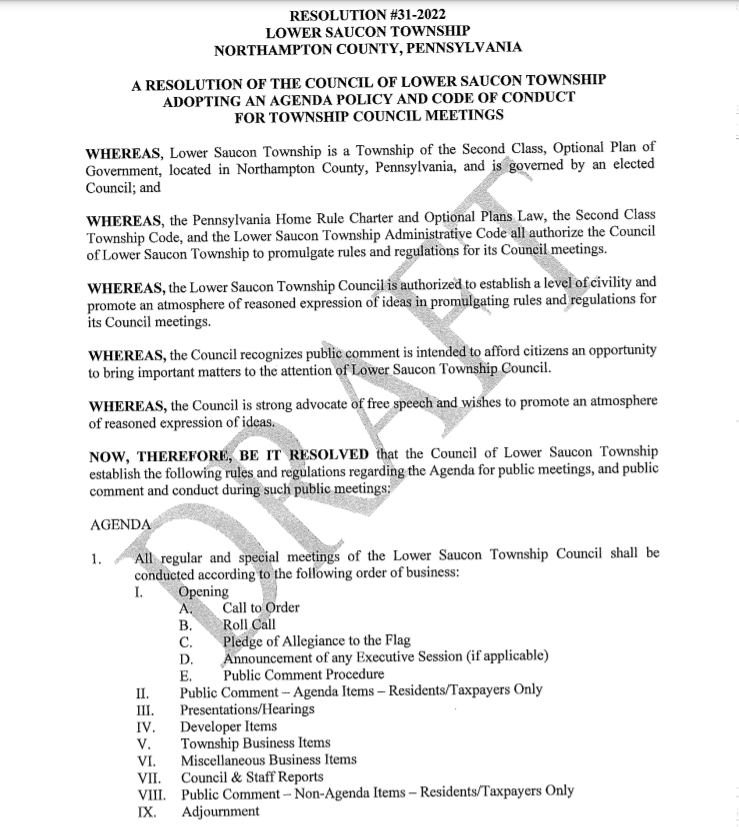 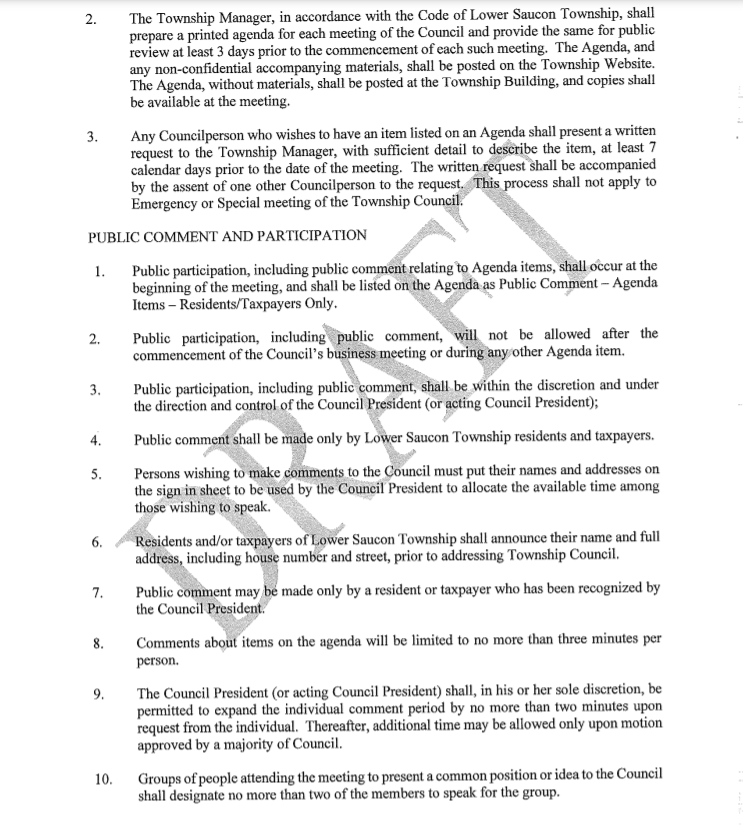 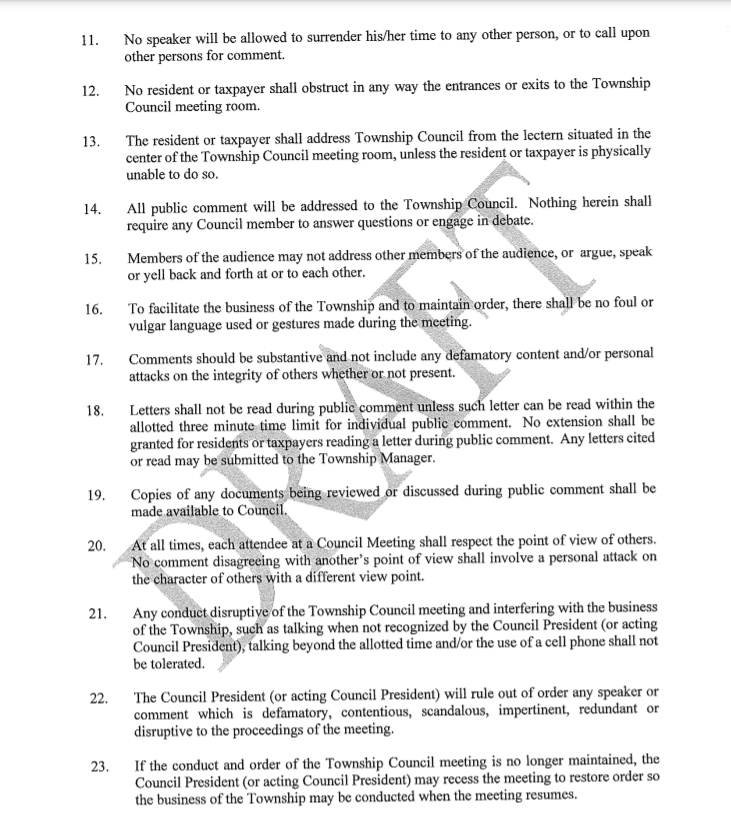 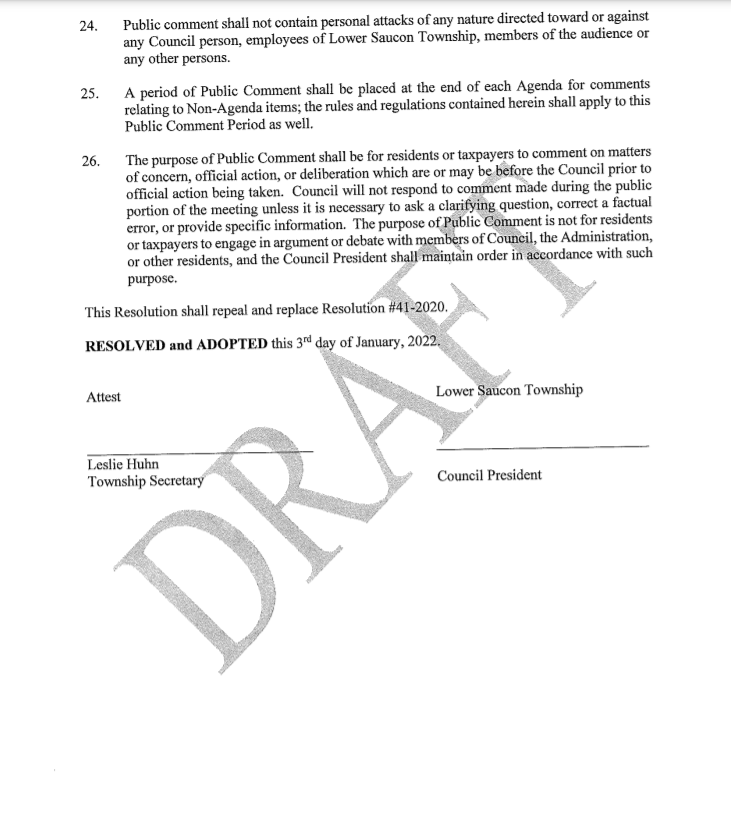