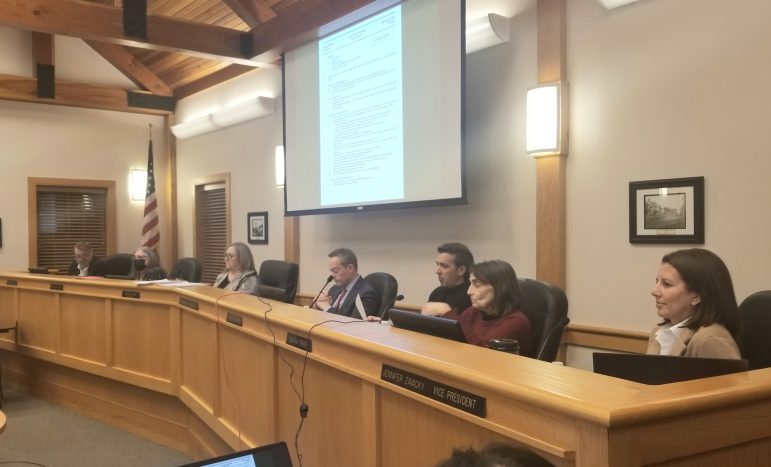 Despite having received three quotes for the necessary technology upgrades, Lower Saucon Township Council voted Wednesday to table a discussion about livestreaming council meetings until a new township manager is hired.

“It’s a lot of money,” said councilman Tom Carocci of the quotes the township received, two of which were from TDS Technologies of Allentown and one which was from Applied Video Technology of Phoenixville.

The three quotes along with accompanying paperwork for one of them may be found on pp. 130-137 of the Feb. 16 agenda and its supporting documents.

Carocci said that whoever is ultimately hired to replace Huhn on a permanent basis should have a say in determining what the best technology solution for livestreaming council meetings is, since that person is going to have to “live with the system.”

“I agree with you, Tom,” council president Jason Banonis said to Carocci. “Otherwise we’re going to buy a system that may not be useful.”

Council vice president Jennifer Zavacky said she was disappointed that the quotes didn’t include more information about the specific components that were being recommended.

“Being in technology myself…like, all I saw were quotes,” she said. “I don’t know the difference between the different cameras.”

The quote from Applied Video Technology included the purchase of a RoboSHOT 30e OneLINK HD PTZ camera with video/power/control over a CAT extension for $4,685, and the higher of the two quotes from TDS Technologies included the purchase of a Vaddio RoboSHOT 30E OneLINK PTZ camera. Although its price alone wasn’t listed as a line item, an internet search produced results for the same or similar cameras priced at around $3,000 and up. PTZ is an abbreviation for “pan-tilt-zoom” and references the capability of the camera to cover the room in which the meeting would be livestreamed.

“I assume it will work,” said Zavacky of the different cameras that were included with the quotes. “But I personally would like our IT company to come here and advise us.”

Zavacky added that she didn’t think anyone on council was qualified to judge what solution would be best for livestreaming the meetings.

At around that time a local blogger who has been livestreaming township council meetings on her blog’s Facebook page held up a pad of paper on which she had written “83 watching now,” in reference to the number of people viewing the meeting at that moment.

Andrea Wittchen publishes the Saucon Shenanigans blog, which is exclusively about Lower Saucon Township Council, and has streamed council meetings using only a phone.

“If you’re going to do it right, you do it right,” Zavacky said. “I think we need the advising of our IT folks.”

The only dissenting voice during the discussion belonged to councilwoman Priscilla deLeon, who said council has already spent too much time discussing what to do to make meetings accessible to residents online.

“I think we’ve stalled long enough,” she said, adding that she was “just shocked” that the other members of council were “delaying this again.”

“You don’t know how many people have told me that they can’t (watch the meetings),” deLeon said. 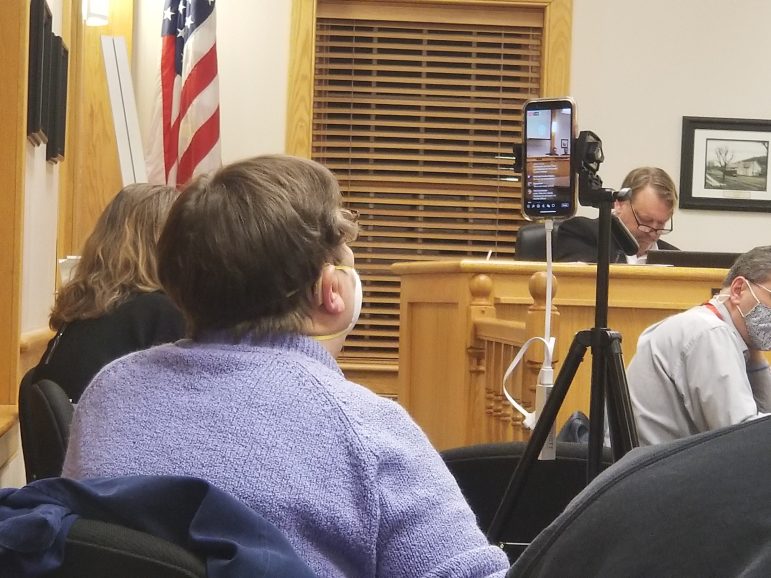 Saucon Shenanigans blogger Andrea Wittchen monitors a livestream video of the Feb. 16 Lower Saucon Township Council meeting on her blog’s Facebook page. Wittchen, a resident who blogs about Lower Saucon Council, began livestreaming the meetings in January. Township council last year voted to obtain quotes for livestreaming its meetings to allow for remote participation in them by residents, but then tabled a discussion about the quotes on Wednesday. Pictured above at upper right is councilman Tom Carocci, who said the decision should be delayed until a new full-time township manager is hired.

DeLeon asked whether the livestreaming quotes would be a discussion item on council’s next meeting agenda.

“I don’t want it to be on the agenda if we don’t have a permanent manager,” Carocci responded.

After the motion was approved to table further discussion regarding the technology quotes until a full-time township manager is hired, deLeon said, “this is disgusting.”

A resident, Sue Lucrezi, also told council she will be inspecting the job description its ad seeking a new township manager includes a description of its technology requirements.

“I hope we get that Zoom camera here soon,” she said. “When this new council manager is hired, I hope technology is at the top of your requirements, because you can’t go forward until we get one. Make sure you put that on the requirements, please. And when that posting goes out, I’m going to be looking at it.”

Council also voted at the meeting to appoint Peter Marshall as its interim manager.

Marshall has previously managed communities such as Newark, Del., and State College, Pa., Carocci said, and has an extensive background in municipal management.

Council agreed to pay Marshall $95 an hour plus $300 a week toward expenses, since he lives in State College and will be staying in a hotel while he’s working in Lower Saucon.

Council was told that the expectation is for Marshall to work approximately 20 hours a week at the township to begin with, although he will be available remotely at other times.

At the Feb. 16 meeting, council also voted to create a search committee for the purpose of hiring a permanent replacement for Huhn, who is leaving Lower Saucon after nearly 20 years of employment with the township.

The committee will consist of Carocci, councilwoman Sandra Yerger and council solicitor Linc Treadwell, with Marshall also advising it.

Huhn received a round of applause for her years of service to the township.

“It’s bittersweet,” she said of her final township council meeting. “It’s hard. It was a hard decision (to leave).”

She called her years of employment at Lower Saucon “great” and said she’s “forever grateful.”

“We will miss you,” Banonis told her.

The next Lower Saucon Township Council meeting will be held Wednesday, March 16 at 6:30 p.m. at the town hall building at 3700 Old Philadelphia Pike, Bethlehem. Draft meeting agendas are posted in advance of council meetings on the township’s website.

The next borough council meeting will be held Tuesday, Feb. 21 at 7 p.m. at Borough Hall. Click here for the link to the livestream and to view the draft agenda.