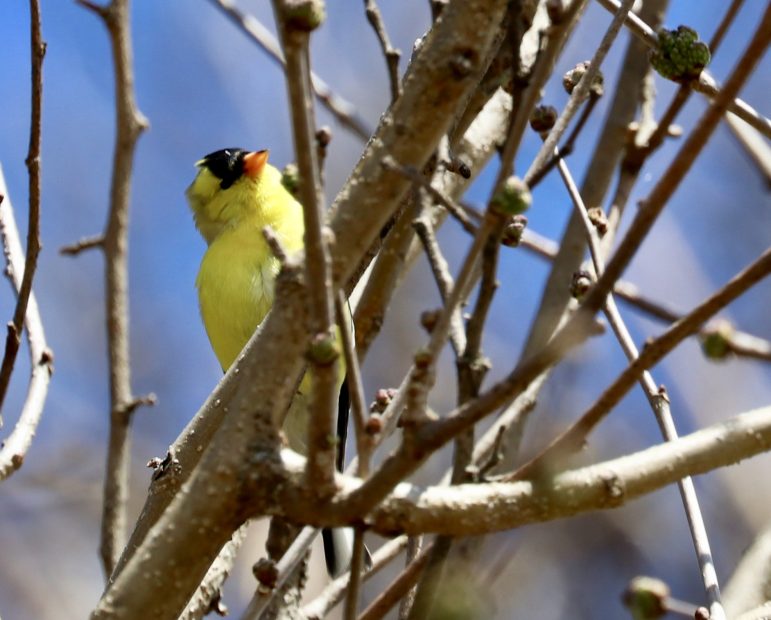 An American goldfinch photographed in the spring at Water Street Park in Hellertown. (Credit: Toby Broun)

Lower Saucon resident Bonnie Parker isn’t a member of any local bird-watching organizations, but she couldn’t be any more serious about the worth of birds in her life.

As Parker undergoes treatment for cancer this year (having just gone through two years of serving on the front lines of the COVID-19 pandemic as a registered nurse at a local hospital), she has found watching birds in Saucon Valley a “soothing and calming” experience.

“I’m trying not to take anything for granted,” she said.

In the last month, Parker has managed in Saucon Valley to photograph some of our most spectacular local feathered visitors.

These include the male rose-breasted grosbeak, sometimes nicknamed the “cutthroat” because of its red-colored “bib,” and the mellifluous Baltimore oriole, which can be “easily lured to backyard feeders,” according to Cornell University’s well-known Allaboutbirds.org ornithological site.

“The birds are just amazing,” said Parker, who sets out several feeders on her property to attract birds. She likes to sit outside in the early part of the day to watch for birds. “The grosbeak was again there this morning.”

In densely-populated southeastern Pennsylvania, we’re in the famous Atlantic Flyway, so we see birds many Americans will rarely encounter. Even when Bethlehem was a growing heavy-industrial town in the early 20th century, the Lehigh Valley’s arguably most famous writer of all time, HD, or Hilda Doolittle, turned to writing about birds.

Many local birds are heard before being seen. You can level up a birding hobby with a basic set of binoculars and Cornell’s famous and free Merlin app, which includes its revolutionary sound ID tool.

Joining online localized groups such as PA Birders on Facebook can help show you what others local birders spot and connect you to them.

If you want to get into bird photography and don’t mind spending a few hundred dollars, a DSLR camera with a telephoto lens comes in handy.

With humans and birds in such proximity in spots like Hellertown, letting nature alone is old wisdom. In late spring and early summer, when fledglings make their way out of nests, it’s normally advised to leave fledglings be, for instance, and to keep indoor-outdoor pet cats inside.

“I learned this week that wrens and flycatchers often/usually put snakeskin in their nesting materials to ward off prey, such as crows, etc. Also, (I) just learned that red-shouldered hawks feed their young almost exclusively snakes and amphibians. Humans have an irrational fear of snakes—even harmless ones that benefit the garden like garters and rat snakes,” posted Facebook PA Birders member Meredith Pool Burnett of Kennett Square. 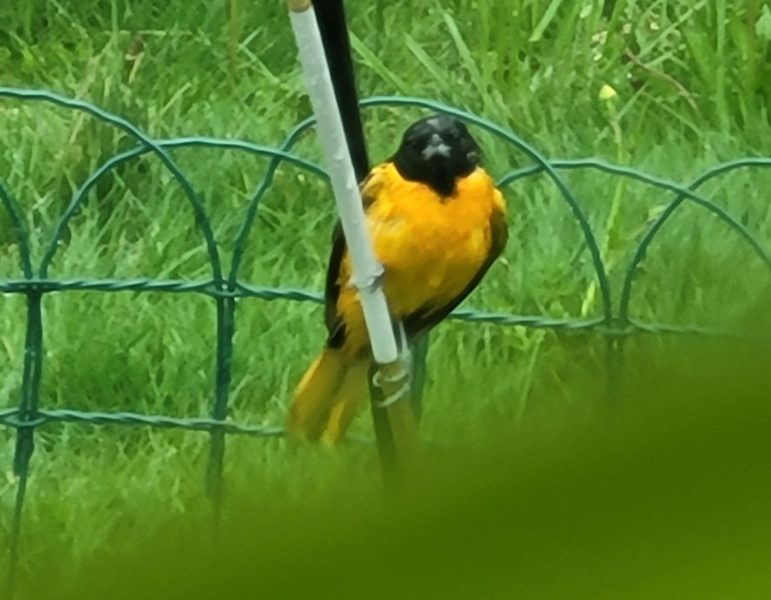 For Parker, who has passed the halfway point with her chemotherapy treatment, and who has been setting about bird feeders for about 10 years, what matters most is a spiritual connection to birds and the universe.

“Life goes on,” she said. “I think to be in the present moment and appreciating God’s work is really where (bird-watching) falls for me.”

Perhaps it’s no surprise that American poet Emily Dickinson wrote that “‘Hope’ is the thing with feathers –  That perches in the soul.”

Bill Broun is a writer who lives in Hellertown Borough. He can be reached at BillBroun.com, and he blogs at MyPrivateHellertown.com. He is Professor of English at East Stroudsburg University. 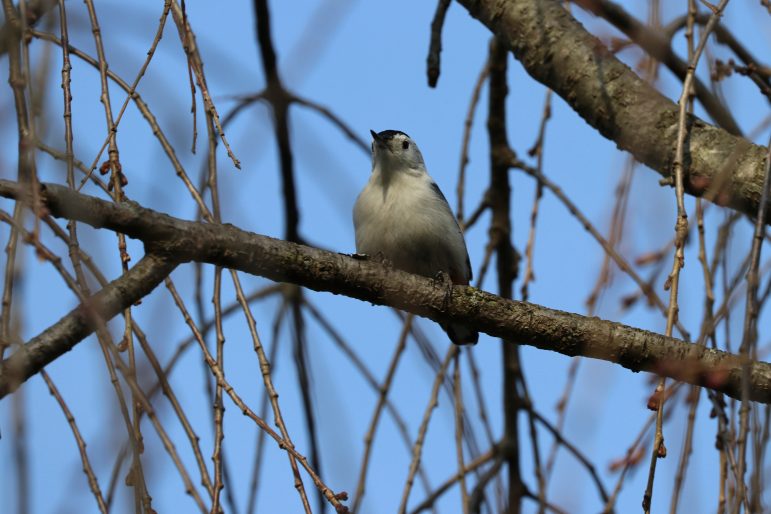 A nuthatch photographed in the spring at Water Street Park in Hellertown. (Credit: Toby Broun)

A partial list of verified birds commonly spotted in Hellertown and Lower Saucon: