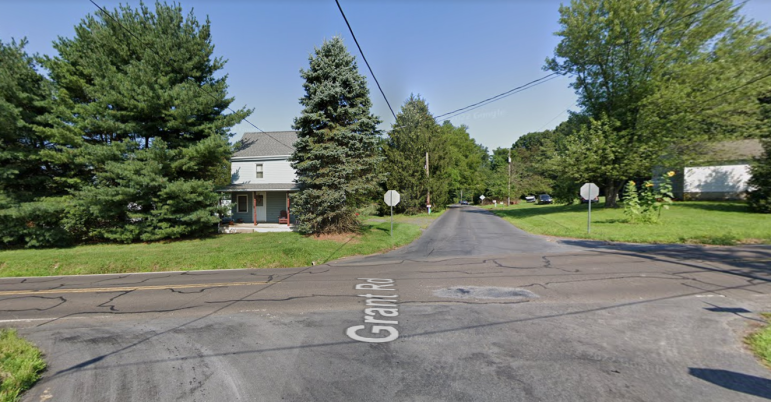 Above, an August 2021 view of the intersection of Grant and Allentown roads in Milford Township, Bucks County. A 2019 view of the intersection (see below) retained by Google Maps street view’s database shows that a “Look Left Right Left Before Pulling Out” precautionary road sign was previously installed facing Grant Road cross-traffic, at least in one direction.

Police said Wednesday that two of the people who were hurt–including the driver of one of the vehicles and his passenger–suffered what were believed to be serious injuries.

According to a state police accident report, the crash happened Saturday, Sept. 24, shortly after 9 a.m., at the intersection of Allentown and Grant roads.

Police said it occurred when a southbound driver on Allentown Road hit a car that had stopped at the stop sign on Grant Road and was trying to proceed across the intersection.

The accident report identified the southbound driver as a 24-year-old Center Valley man and the driver and passenger in the other vehicle as an 84-year-old man and a 71-year-old woman from North Wales, Montgomery County.

Police said the car the couple were in–a 2013 Hyundai Sonata–was more than halfway through the intersection when it was struck by the other vehicle, which caused it to strike a ditch. They said the Center Valley man was driving a 2006 Subaru Legacy.

The man and woman in the Hyundai were trapped in their car’s wreckage and had to be
“extricated by mechanical means,” the crash report said, after which they were taken to St. Luke’s Upper Bucks Campus for treatment.

Police said the driver of the Subaru suffered suspected minor injuries and refused EMS transport to the hospital.

Both vehicles suffered disabling damage and were towed from the scene, police reported.

According to police and Bucks County district court records, the Center Valley resident was issued summary traffic citations for speeding and overtaking on the left. The records indicate that the driver from North Wales was issued a citation for a stop sign violation. 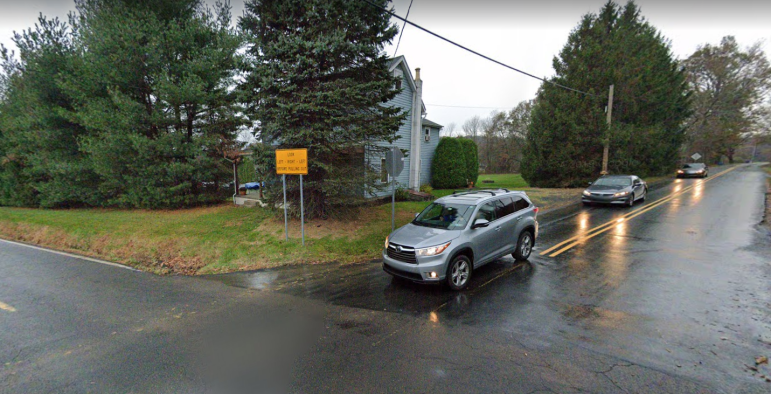 Above, a November 2019 Google Maps street view of the intersection of Grant and Allentown roads in Milford Township, Bucks County, shows that a “Look Left Right Left Before Pulling Out” precautionary road sign was previously installed to face Grant Road cross-traffic. More recent street view imagery shows that the sign was no longer in place by August 2021.