Hellertown Area Library officials have announced their decision to end library services for Lower Saucon Township residents effective Jan. 1, 2023. They have approval from the state Office of Commonwealth Libraries to do that–but township officials are crying foul.

The decision was confirmed in a letter from HAL board president Ken Solt that was sent to township officials late last month and subsequently shared by township councilwoman Priscilla deLeon on a councilwoman Facebook page she created and regularly uses to share information with residents and others. The letter represents the latest chapter in a local library services saga that began in January and has upset library supporters in both communities and beyond.

In Solt’s Oct. 26 letter to Lower Saucon Township Council (below), he writes that State Librarian Susan Banks “has granted the request of Hellertown Area Library (HAL) pursuant to regulation Section 141.21(6)(i) to exclude Lower Saucon Township (LST) from HAL’s direct service area prior to the end of the 10-year period as described in Section 141.21(6).” 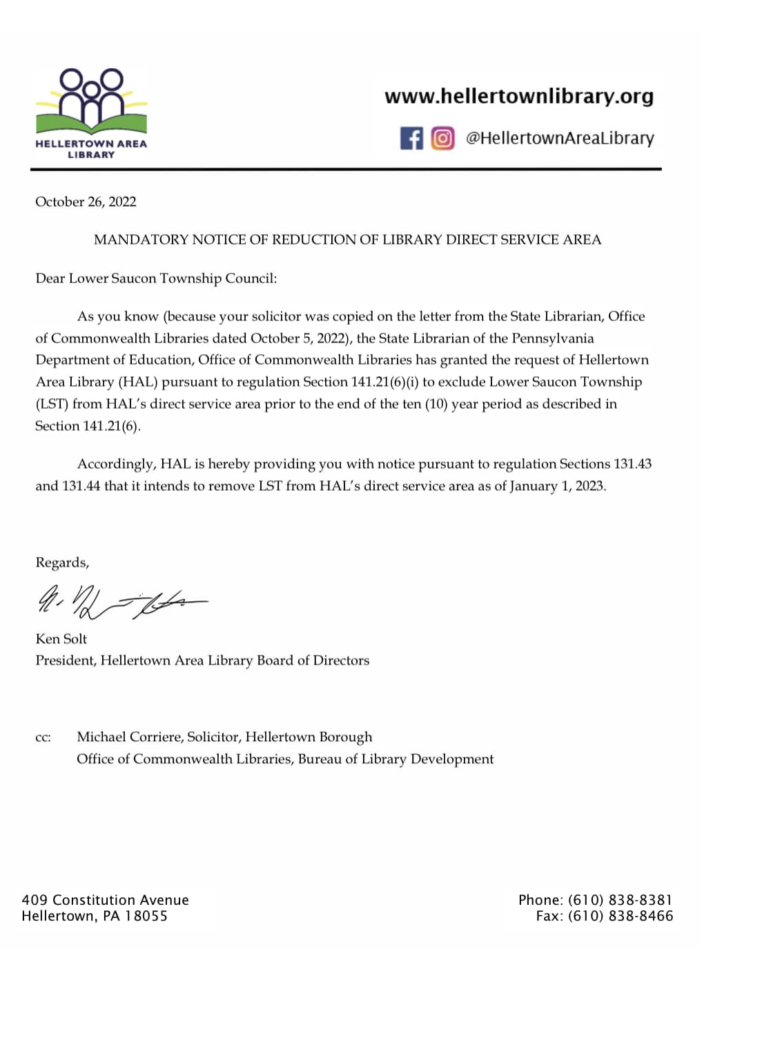 The local libraries section of the Pennsylvania Code Solt references concerns geographic service areas and says that “any municipality which is added to a direct service area of a library shall be considered part of that area for a period of not less than 10 years” except when any of three special conditions apply.

The exceptions include “special approval…by the State Librarian for excluding such municipality or municipalities from such direct service area,” resolution by municipal authorities to withdraw from the service area and a merger of two or more libraries or a contractual agreement.

In an Oct. 20 letter to an attorney for the Office of Commonwealth Libraries–which is part of the state Department of Education–an attorney for Lower Saucon Township referenced the “apparent decision to remove the township from the service area for the Hellertown Area Library,” calling that decision “a complete surprise to the township.”

The township ceased providing financial support for the library at the end of January, after township council voted 4-1 earlier in the month to reject a five-year, approximately $500,000 library services agreement with HAL and instead offer a donation of $50,000.

Soon after, the Hellertown Area Library Board of Trustees rejected the donation and received additional funding from the borough of Hellertown to help balance the library’s 2022 budget.

Lower Saucon Township residents have had full access to the library since the end of January, despite the fact that there is no agreement in place and the township is no longer providing financial support.

In his Oct. 20 letter to Dept. of Education Chief Counsel Elizabeth Maguschak (below), attorney Michael McAuliffe Miller said that “from the township’s perspective, the library is strong-arming the township for the purpose of squeezing more money out of the township’s taxpayers and trying to remove the township’s ability to object to future payment increase demands by removing is representation from the board.”

“Indeed, it is particularly concerning because the township has recently given a $50,000 donation to ensure the adequate funding of the library rejected that good faith donation,” Miller said in the letter, which was also shared by deLeon on her councilwoman Facebook page. “This seems to be a highly unusual position for a public library to take–to try to freeze out the residents of a municipality that has substantially funded it in a misguided effort to put political pressure on that municipality to provide even more funding.”

Months later, and saying it was under pressure to accept the donation from some of its funding municipalities, SLPL’s board reversed course, accepted the money and agreed to study a possible expansion of the SLPL service area to include Lower Saucon Township.

More recently, SLPL’s board said it wanted two things from the township:

The next Lower Saucon Township Council meeting will be held Wednesday, Nov. 16 at 6:30 p.m. at the township building, 3700 Old Philadelphia Pike, Bethlehem, Pa. A meeting agenda will be published in advance on the township’s website.

The next Southern Lehigh Public Library board meeting will be held Tuesday, Nov. 15 at 6:30 p.m. at the library, 3200 Preston Lane, Center Valley, Pa. More information about the board and its meetings may be found on the SLPL website.

It remains unclear if Lower Saucon Township will take the legal action against the Hellertown Area Library council voted to take at its Jan. 20 meeting, when four of five members approved a motion to initiate such action should Hellertown Area Library access be denied to residents. DeLeon voted against that motion as well as the motions to reject the library services agreement in lieu of offering a donation and to donate $50,000 to the Southern Lehigh Public Library.

In his three-page letter to Maguschak, Miller said the township is appealing the decision by the State Librarian to remove Lower Saucon from the Hellertown Area Library’s service area because “no child should go without books, no senior should go without a place of community and no resident of Lower Saucon Township should be prevented from using the services and programs of the Hellertown Library.” 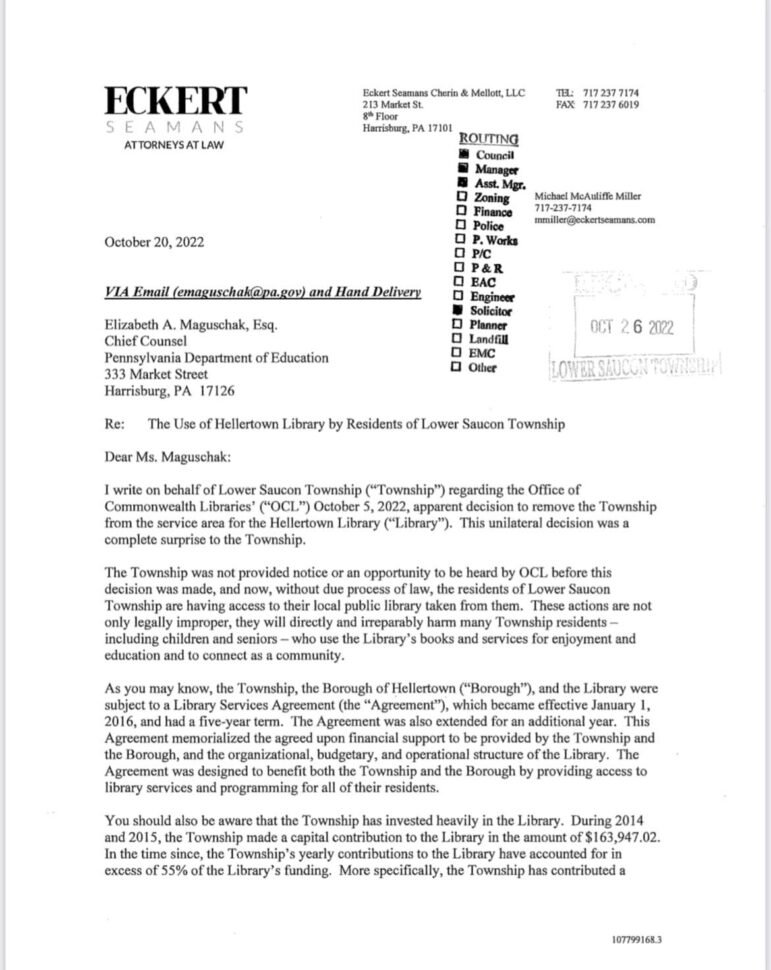 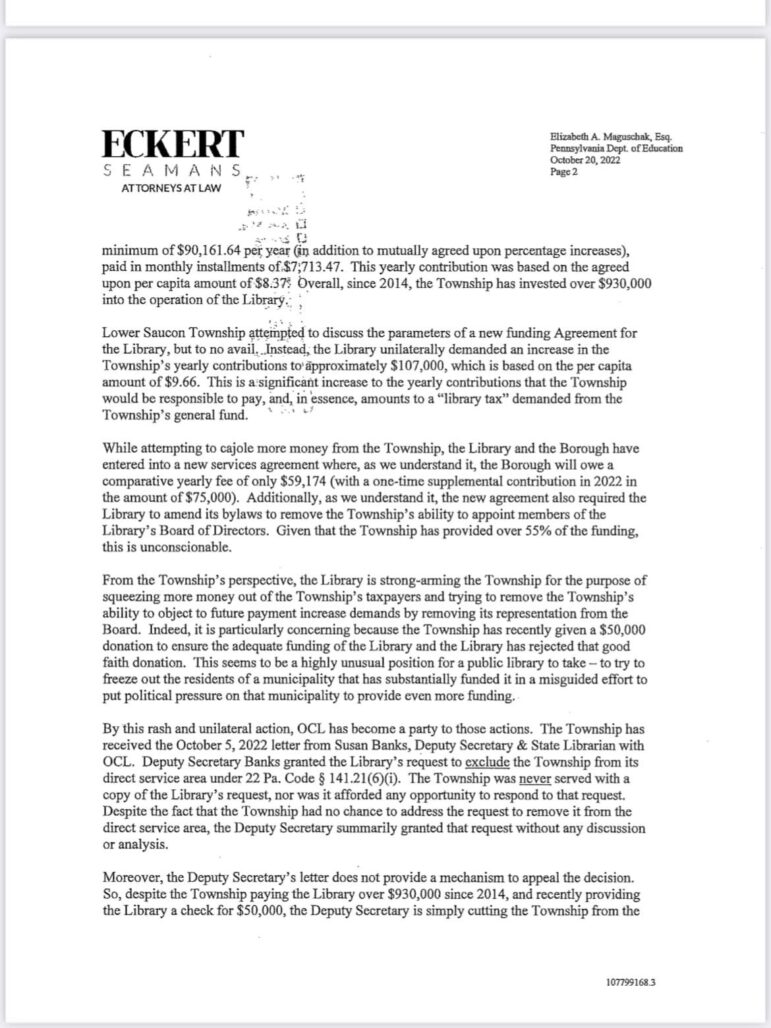 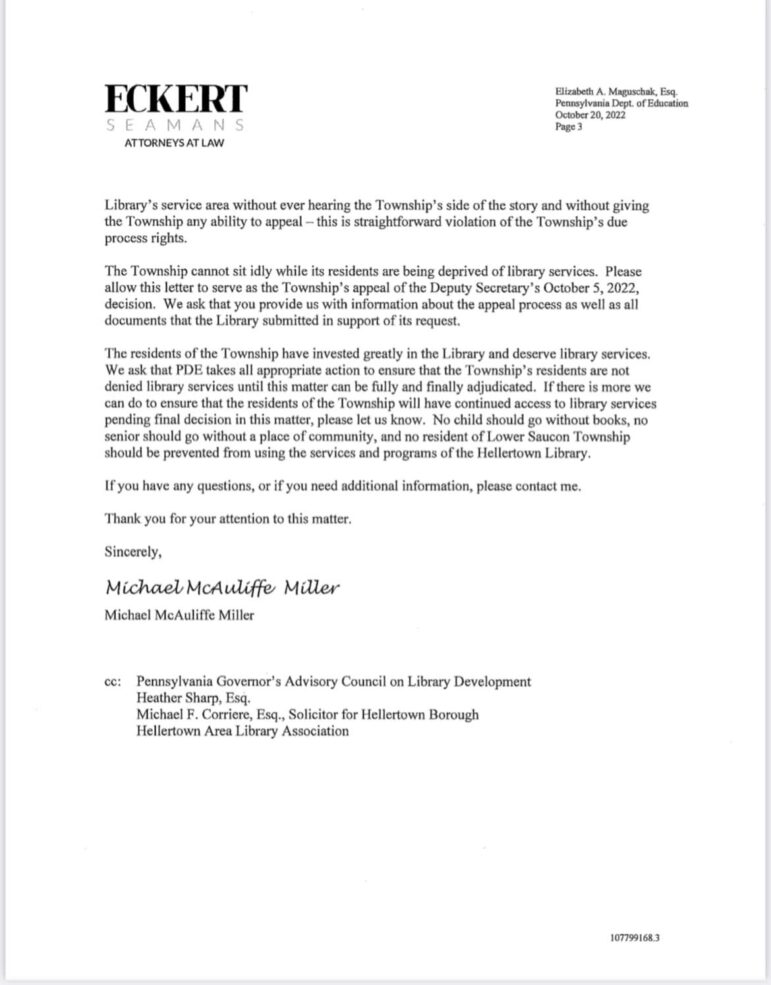