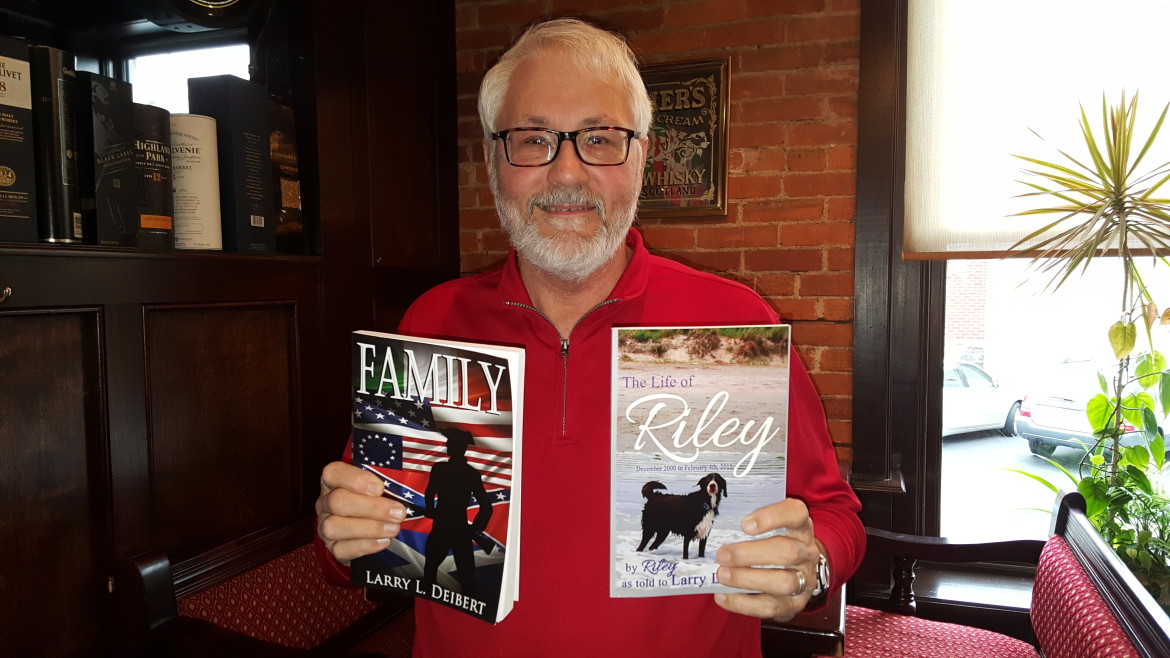 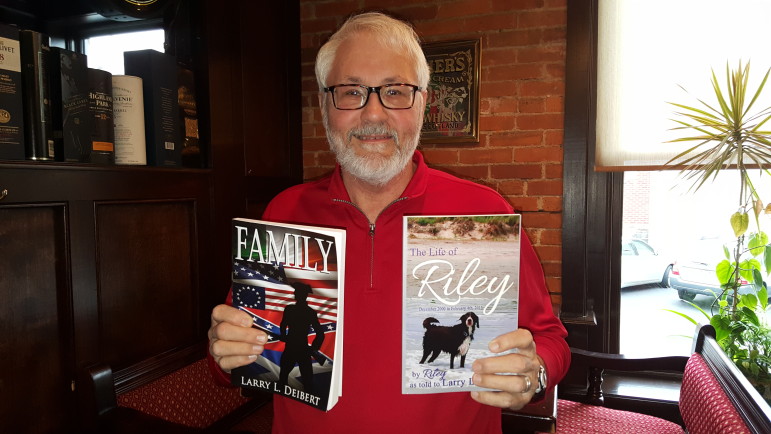 Lower Saucon author Larry Deibert is on a roll, with two new books to his credit: The Life of Riley and Family.

Note: Larry Deibert’s book-signing scheduled for Sunday, Jan. 24, 2016 from 1 to 3 p.m. at the Moravian Bookshop in downtown Bethlehem has been canceled due to the snowstorm.

A Lower Saucon Township author has just published two new books, including one that is a touching tribute to his beloved canine companion of nearly 15 years.

Larry Deibert said The Life of Riley was inspired long before he had to say goodbye to his wet-nosed friend–a 35-pound springer-lab mix–almost a year ago.

“I think ever since the day I had met him it’s been in the back of my mind,” he said of the book, which includes both humorous and touching anecdotes and vignettes Deibert believes any animal lover will relate to–but especially dog lovers.

In its opening “Notes,” he writes:

“I always wished Riley could talk, because I had many one-sided conversations with him. When I would get my breakfast and lunch ready he would always be by my feet in the kitchen, probably hoping that I’d give him something to eat, which I usually did. I’d tell him about what I was going to do that day, and he’d cock his head one way and then the other, seemingly expressing great interest in what I was saying.”

The book itself is written from Riley’s perspective, as though he were a talking dog.

“It’s a good story for anyone who is thinking about getting a dog, has a dog or has ever lost a dog,” Deibert said in a recent interview at Braveheart Highland Pub in Hellertown.

As much as he loved Riley, he has no plans to become a dog owner again right now.

He may, however, write another book about Riley, since he still has great memories of him to share.

“One of his favorite things was Frosty Paws,” he recalled, referring to the popular ice cream specifically for dogs. Riley liked to have a frozen treat every night promptly at 8:30 p.m., and he would remind his master that he was ready for one.

Deibert’s other new book is called Family and is in a different genre than ‘Riley.’

Family is a historical fantasy novel that deals with the subject of immortality, which is one the author has written about in several of his other books, such as The Christmas City Vampire.

The story begins in 1779, when a 31-year-old Continental Army soldier–Julian Ross–is gravely wounded in combat.

The soldier’s friend treats the wound with his blood and infers immortality upon Julian in the process.

From the book jacket for Family:

“Over the course of the next 250 years, Julian gives the gift of eternal life to several friends facing death. By 1930, his Family is complete. … In 2015, when Julian doesn’t arrive at home, nor call his wife, she believes he could be dead. When she finds out he is alive a chain of events begins that could seal the fate of every member of his Family.”

Asked why he likes to write about living forever, Deibert said, “I think it’s just, how you live history, forever. But then again you have the loneliness (of immortality).”

Deibert never planned to be a writer, but he’s the author of nine books (including the two that were just published). Many of his works relate to the military, history, the paranormal and time travel. His published works include 95 Bravo, The Other Side of the Ridge: Gettysburg June 27th 2013 to July 2nd 1863, Fathoms: A Novel of the Paranormal, Requiem for a Vampire, Combat Boots dainty feet: Finding Love in Vietnam, The Christmas City Vampire and From Darkness to Light.

A Vietnam veteran and father of two adult children, he retired from the U.S. Postal Service in 2008 after working as a letter carrier for 21 years. With his wife Peggy, he enjoys traveling to East Coast beaches and beyond, often finding inspiration in far-off places.

Although writing is typically thought of as a solitary pursuit, for Deibert part of the enjoyment of being an author has been the people he’s met on his travels, and in the course of everyday life back home; people who have sometimes been “immortalized” as characters in his books.

For example, a friend who is a waitress (and enthusiastic volunteer promoter) at the Sunrise Diner in Allentown has inspired characters in several of his works.

Deibert is currently working on two books–including one about werewolves–and said he enjoys juggling multiple projects.

“I’d like to write two books a year,” he said, adding that one of those two may be a novella.

One unusual characteristic of Deibert’s writing ability is that he writes all his books chronologically, from start to finish, as opposed to moving back and forth in time in his own mind as he writes.

Deibert’s books are available for purchase on Amazon, as well as from the author directly. To purchase a signed copy and have it shipped for an additional $5 fee, email him at larrydeibert@rcn.com.

He hopes to have a couple of signings at the Saucon Valley Farmers’ Market in Hellertown this summer, and he is also planning to participate in a Local Authors Fair at the Lower Macungie Library on March 12 from 10 a.m. to 4 p.m.