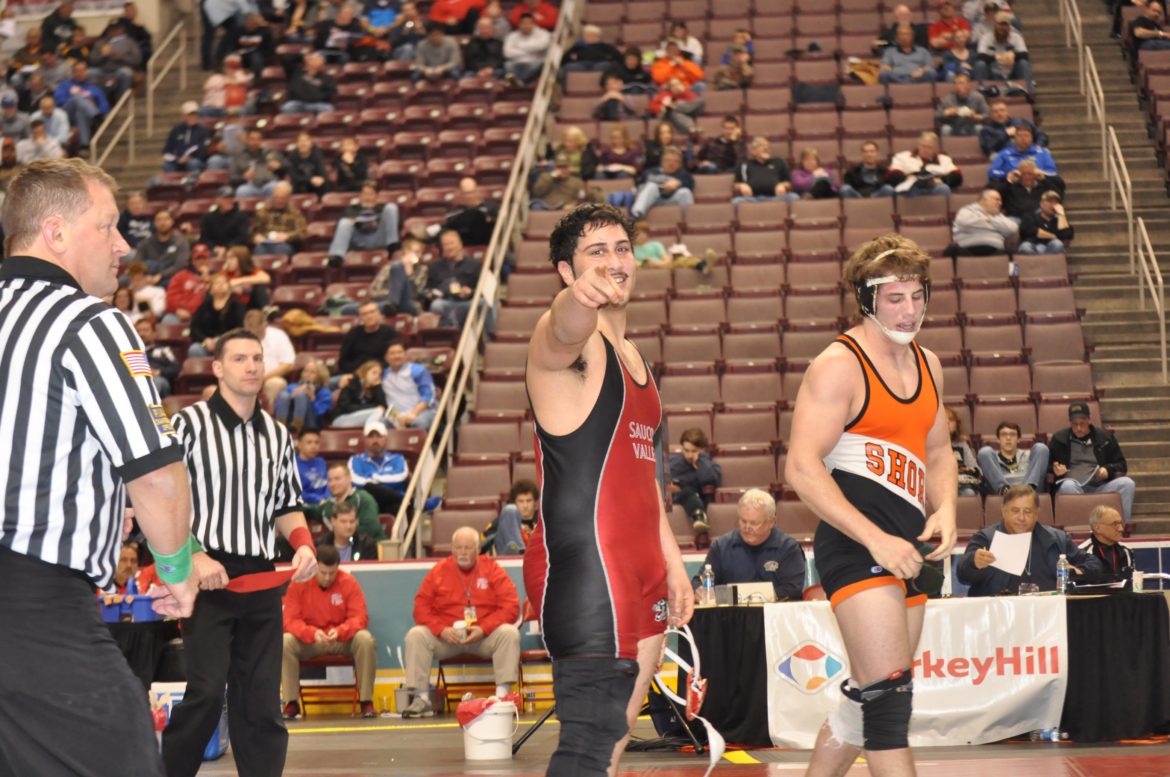 Saucon senior Devin Fontanez point the way to the podium. 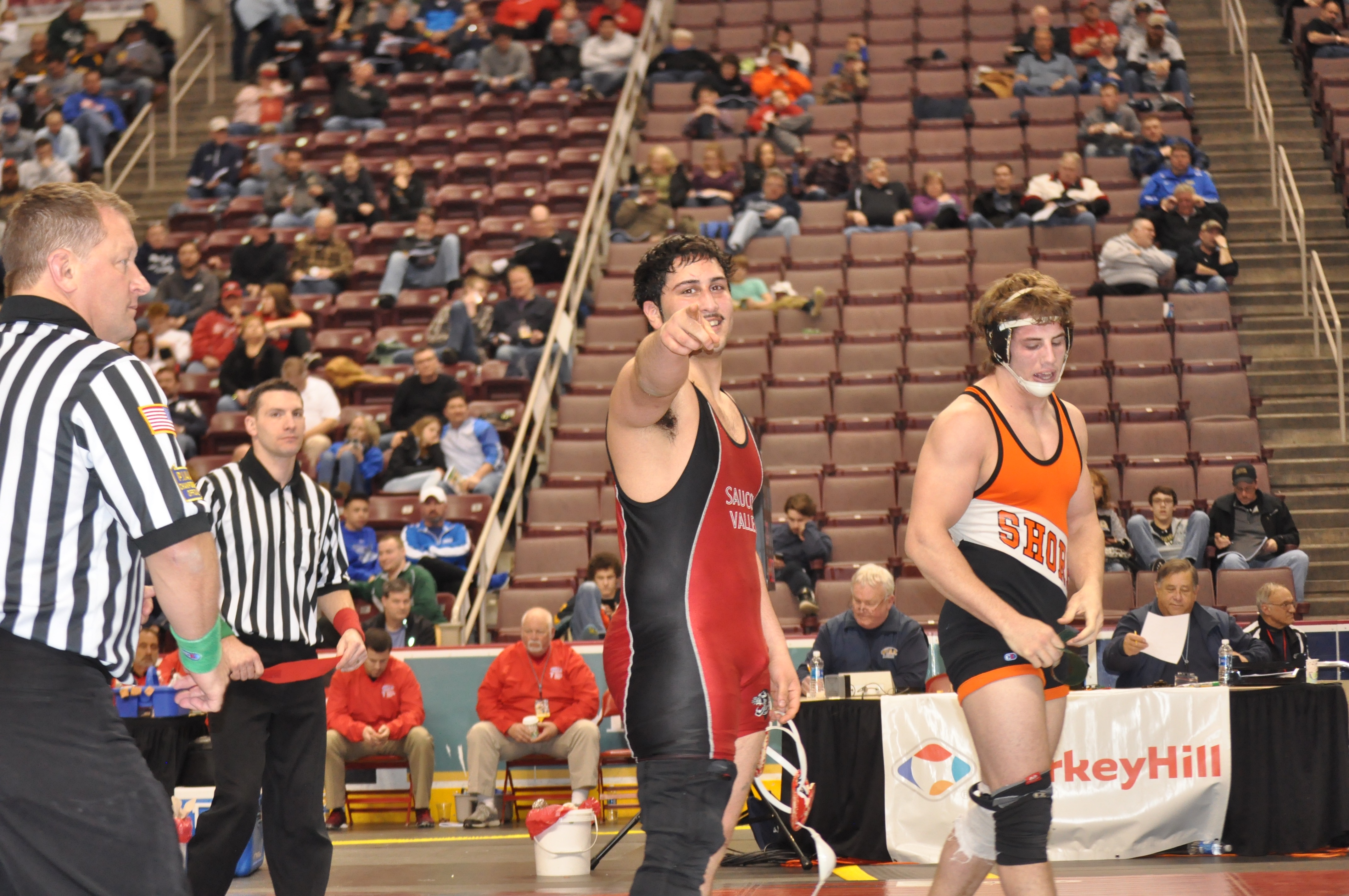 Saucon senior Devin Fontanez pointing the way to the podium.

The Saucon Valley Panthers had six wrestlers who each earned a trip to the PIAA AA State Championships this year.  Josh Jones (120) Paul Miller (126), Angelo Mahaffey (138), Jason Jones (145), Dane Csencsits (152) and Devin Fontanez (220) all had memorable seasons that paved their way to Hershey.

Miller and Fontanez, who were both District XI champions, are seniors and it would be their last trip to the state tournament.  Jason Jones and Angelo Mahaffey are juniors, Josh Jones, another District XI champ, is a sophomore.  Csencsits is a freshman. 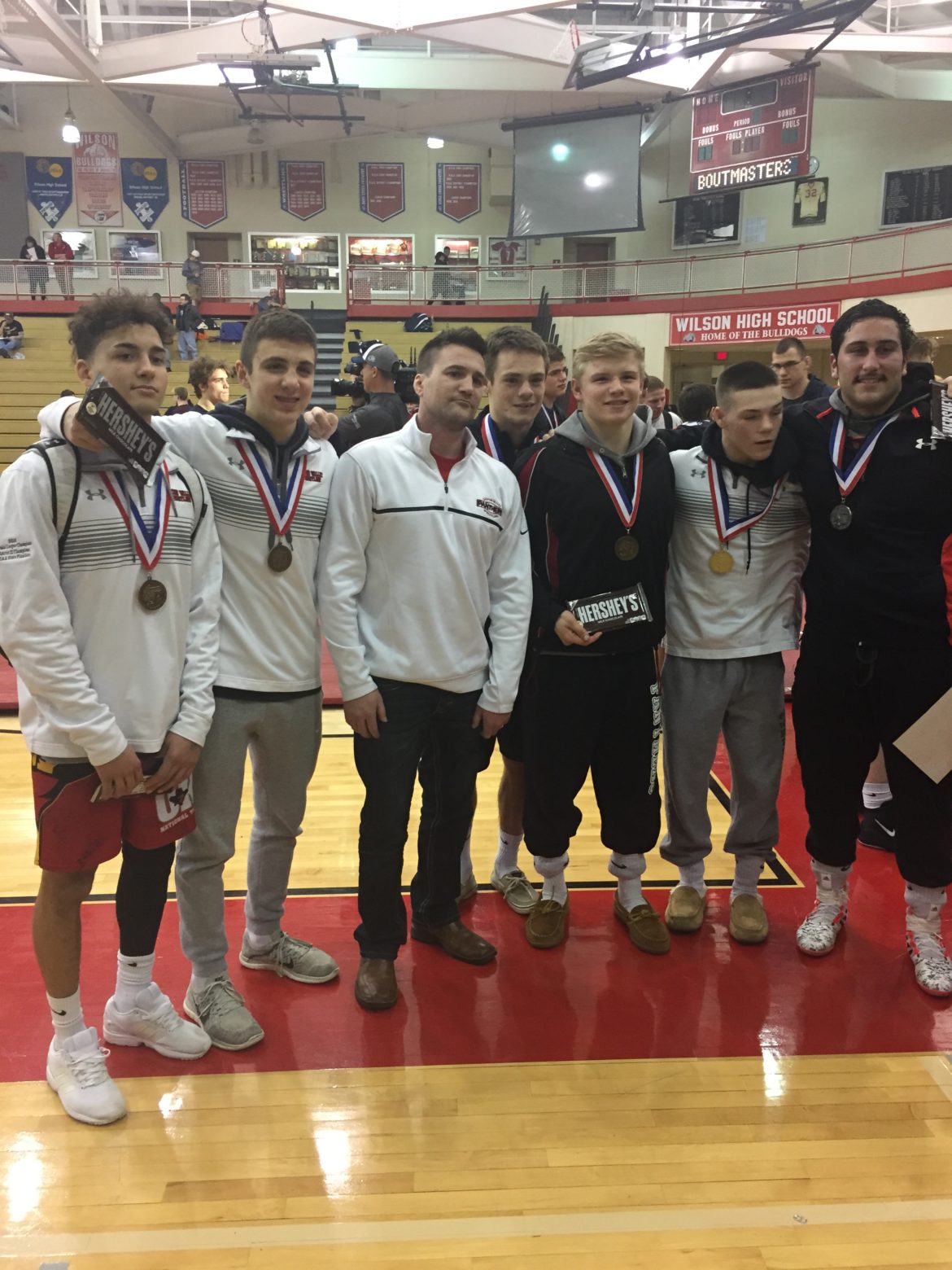 As a team the Panthers accumulated 46 team points which earned them a 12th place finish.  Reynolds, a perennial wrestling powerhouse, ran away with the team championship with 136.5.

Of the six Panther wrestlers, only Josh Jones and Devin Fontanez survived the gruel of the tournament to make it to the podium and leave Hershey with a medal. 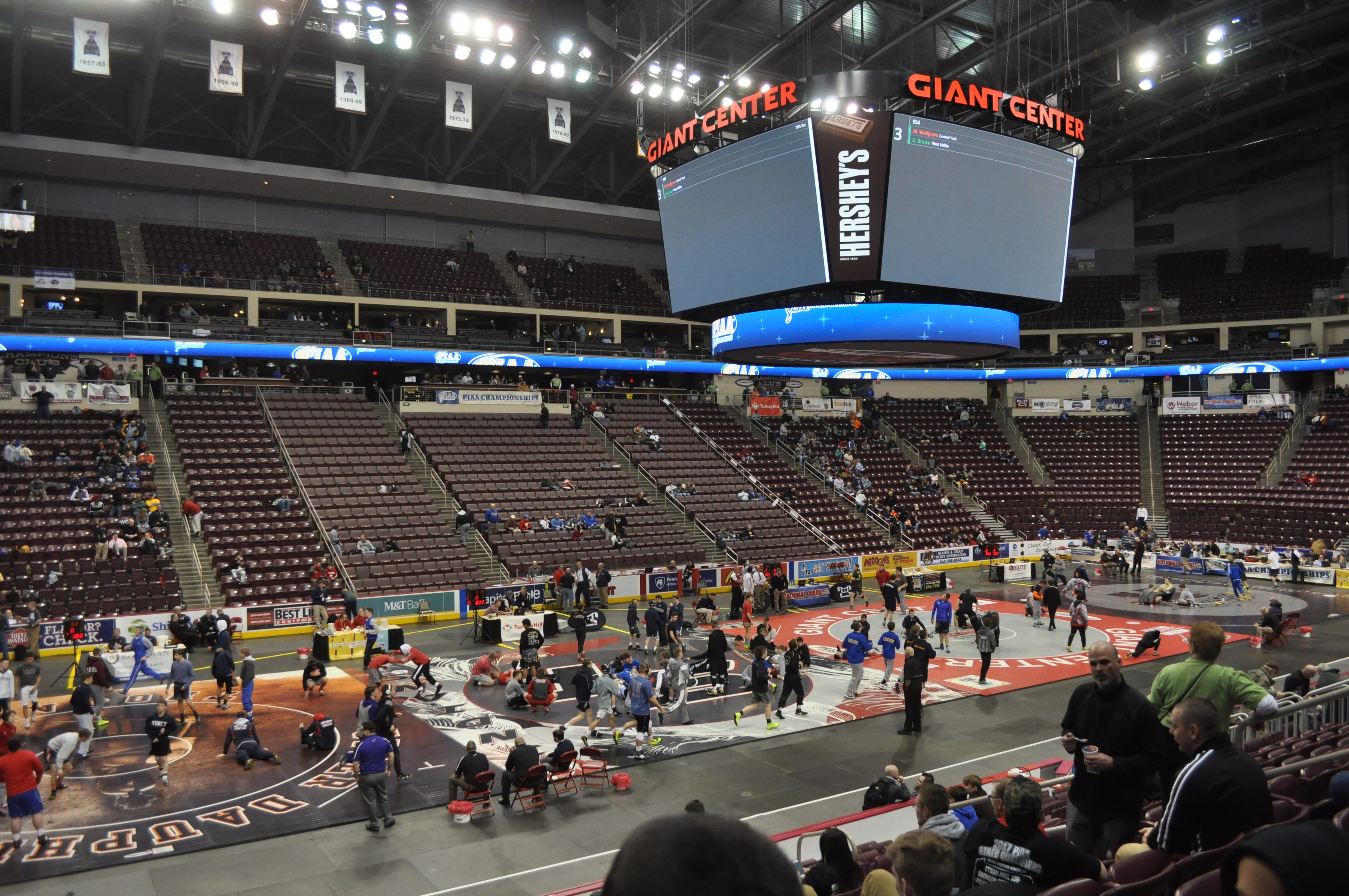 Josh Jones, the District XI and SE Regional champion, won his first two bouts to advance to the  PIAA state semifinal.  Jones first defeated junior Trent Bechtold from Burrell with a 6-1 decision.  In the quarterfinals, Jones earned an 11-3 major-decision over Andrew Ischo of Reynolds.  Jones advanced to the semifinal where he faced Benton’s Cole Rhone.  Rhone, a junior out of District IV with a 35-4 record entering the tournament, was the NE Regional champ.  Jones could not overcome a sluggish start and fell to Rhone 7-3.  Rhone finished 2nd with a silver medal.

Dropping to the consolation bracket, Jones tried to wrestle back to finish third, but Cole Hauck from Line Mountain got the best of him.  Hauck, a senior with a 40-6 record also out of District IV, won 8-4. 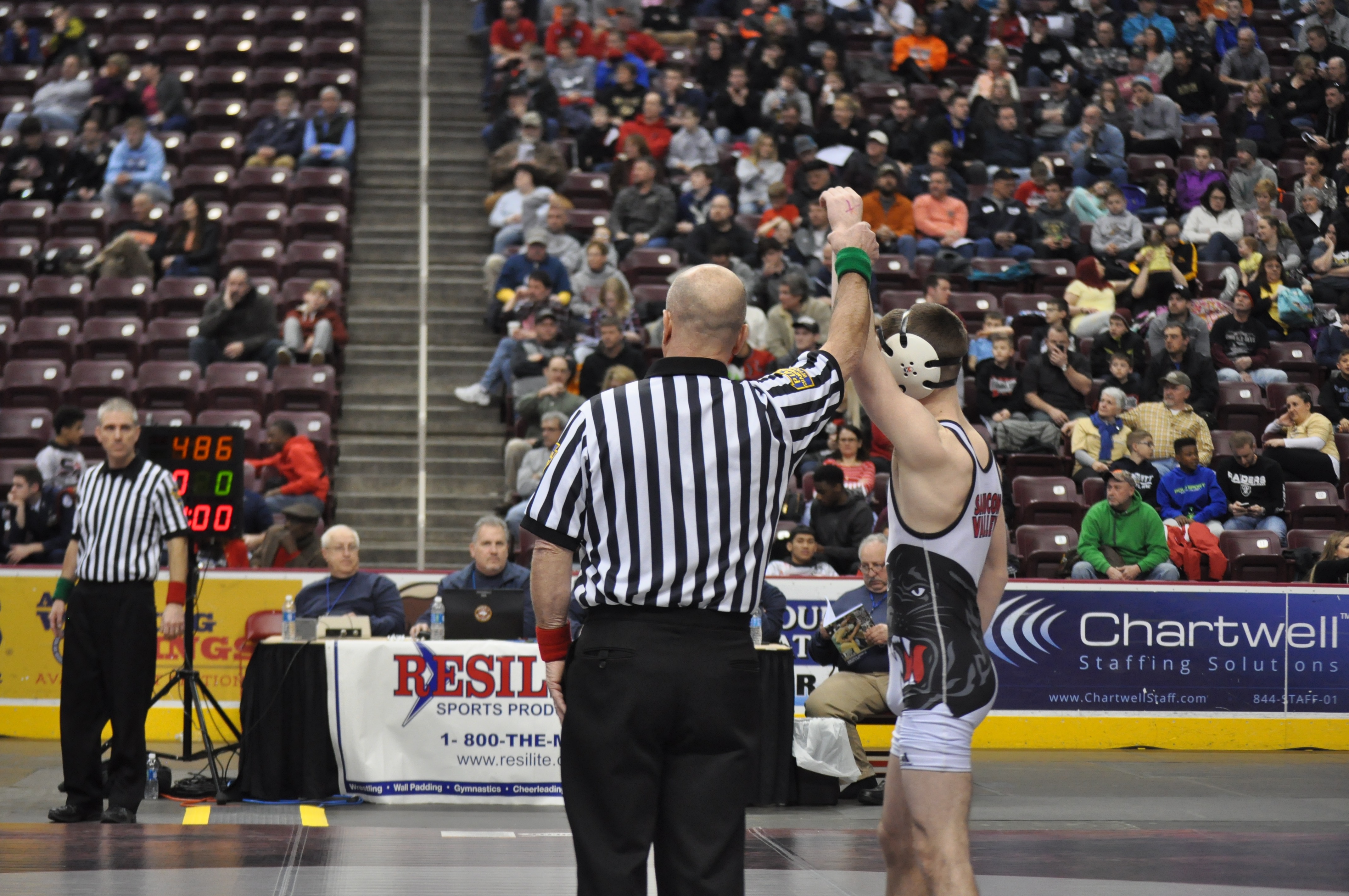 Jones slid to wrestle for 5th/6th place and was victorious by forfeit.  Senior Colin Pasone from E.L. Meyers (Wilkes Barre) was disqualified from the PIAA competition after his bout Friday night for accumulating two separate unsportsmanlike conduct demerits. Jones is credited for going 3-2 for the tourney and finished 5th overall. 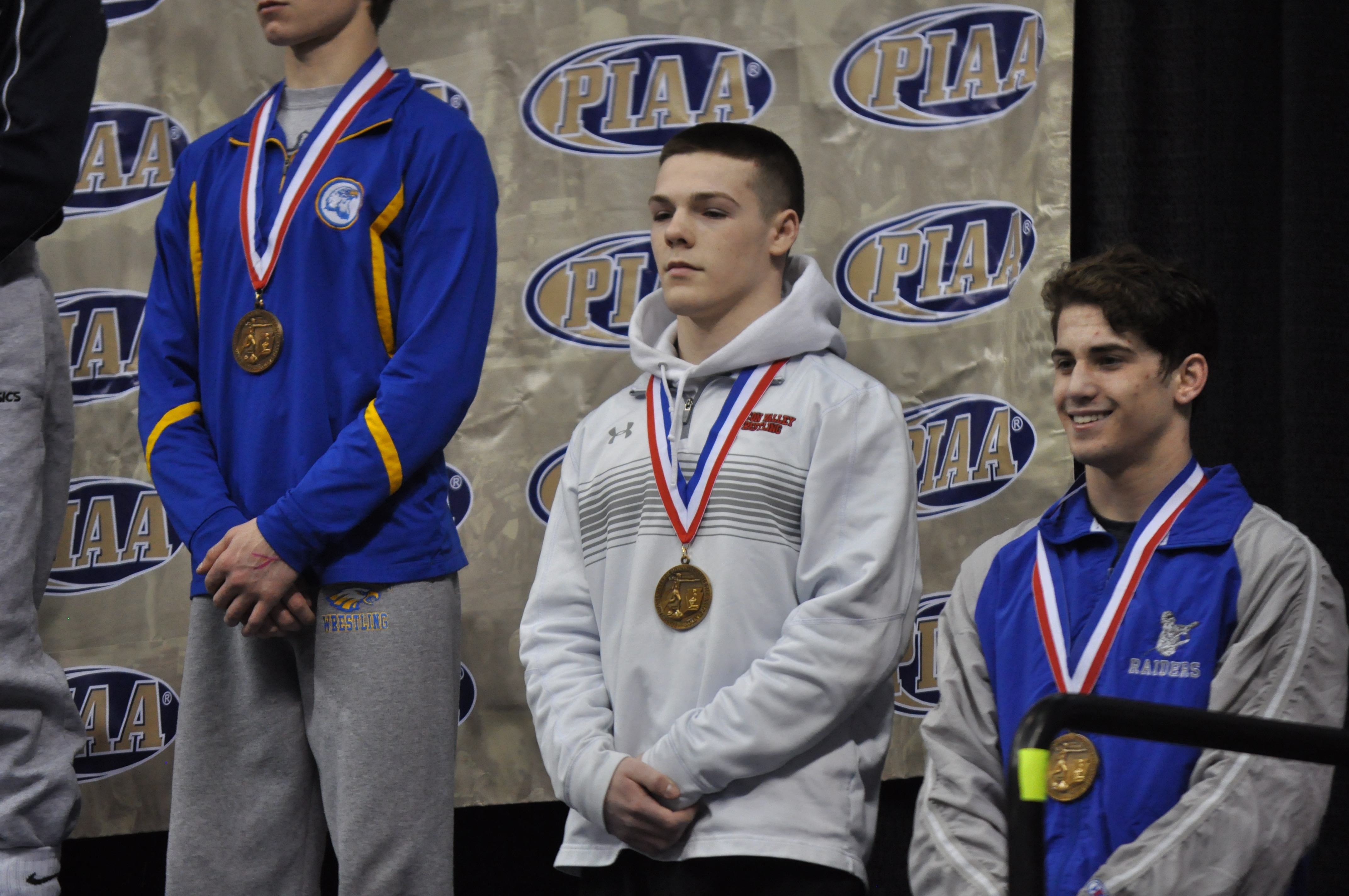 Saucon Valley senior Devin Fontanez was Josh Jones’ Panther podium partner achieving a 3rd place finish.  Fontanez, who finished 7th a year ago, opened the tournament with a pin in 5:49 over Danville senior Jarrett Walters.  In the quarterfinals, Fontanez lost 3-2 in overtime to Bishop McCort’s Josiah Jones.  Jones, who was the SW Regional champ, eventually advanced to the finals and lost to Michigan State commit Cole Nye who defeated Fontanez 3-2 in the SE regional final last week. 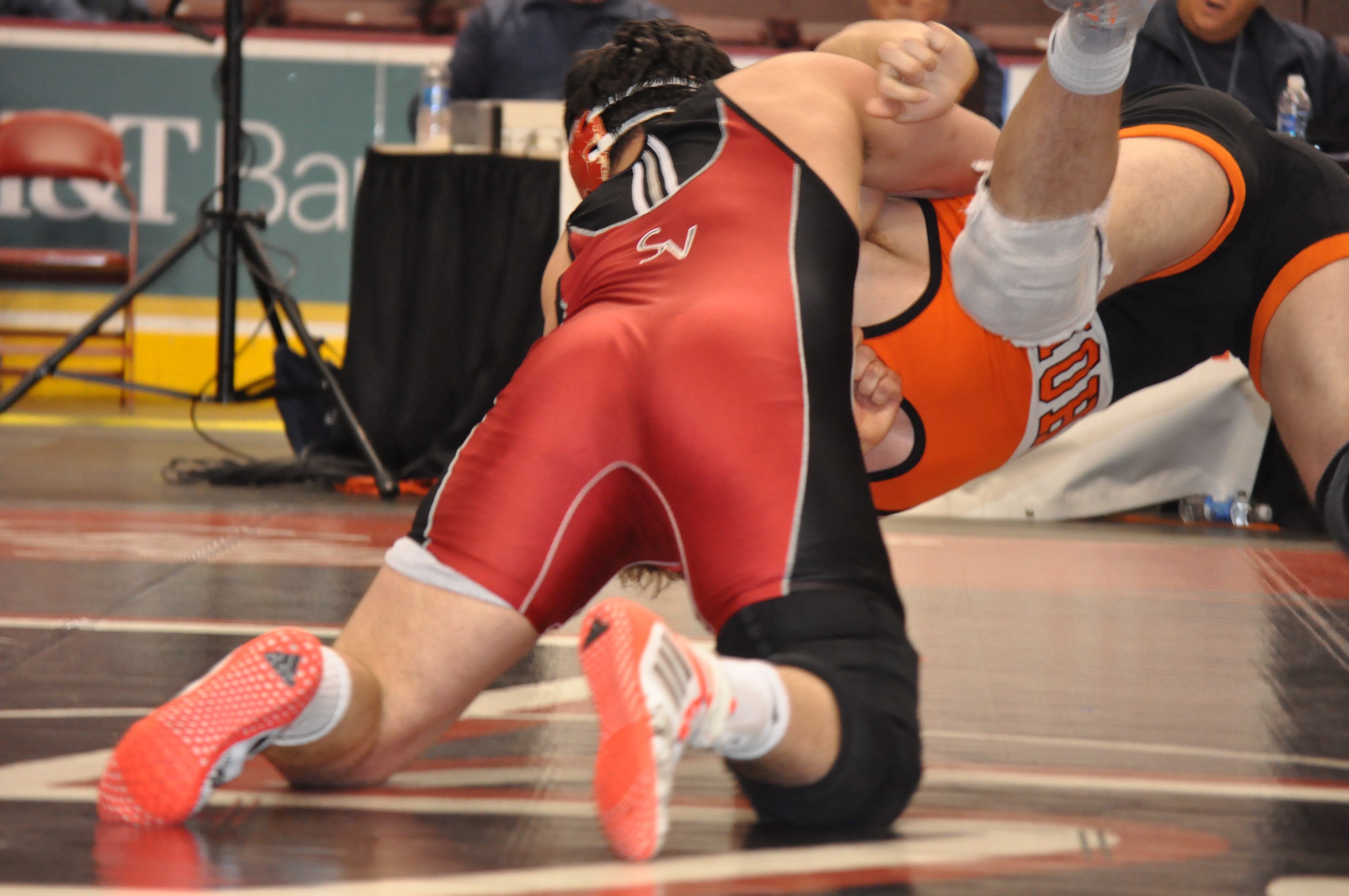 Fontanez finishing his high school wrestling career with a cement job in Hershey.

In the consolation bracket, Fontanez pinned Cole Fuller from Western Wayne in 1:33 before defeating Brookville’s Tyler Cook 3-1.  Fontanez then pinned  Bishop McCoy from South Side Beaver in the consy semis in 2:59.

Wrestling for 3rd Place, the powerful Panther packed Max Mason of Jersey Shore with a cement job in 2:37.  Fontanez, who missed his sophomore season to injury, found his way back onto the PIAA podium for a second time. 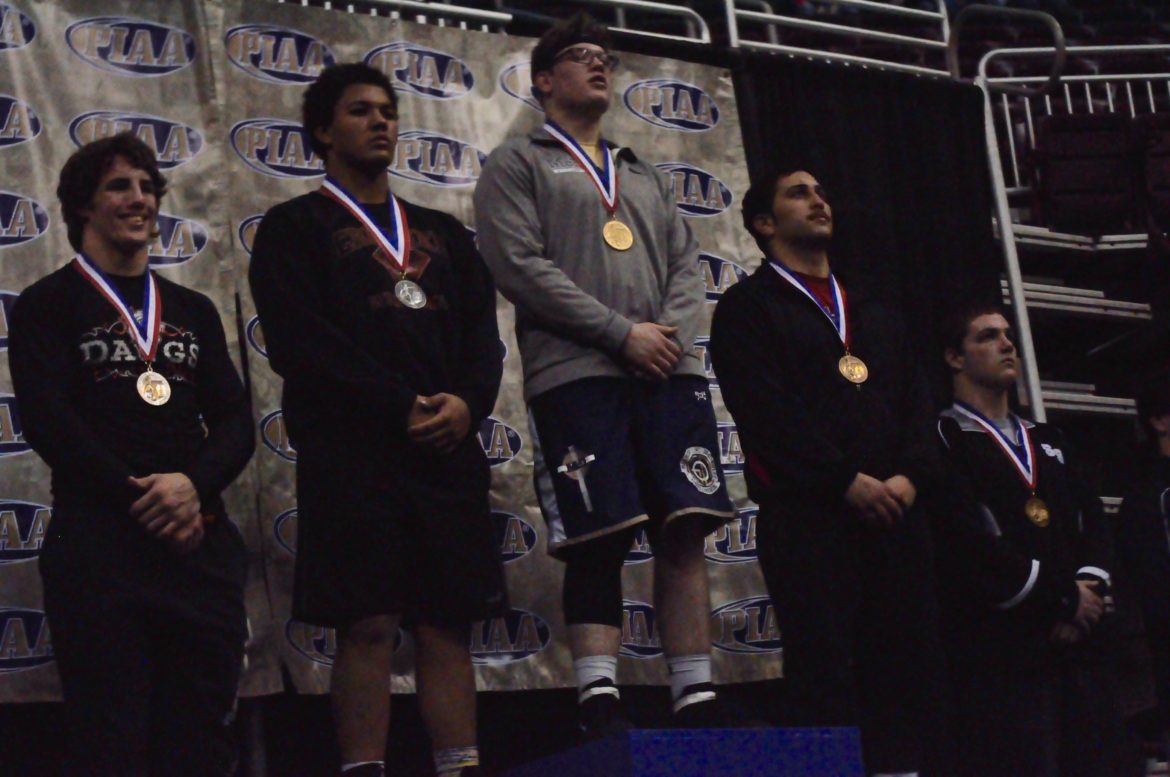 Devin Fontanez finds himself in a familiar place.

Fontanez went 5-1 for the tournament pinning four of his opponents in a total time of 12:28.  This accomplishment earned him the “Pinner” award for the most pins in the shortest amount of time. 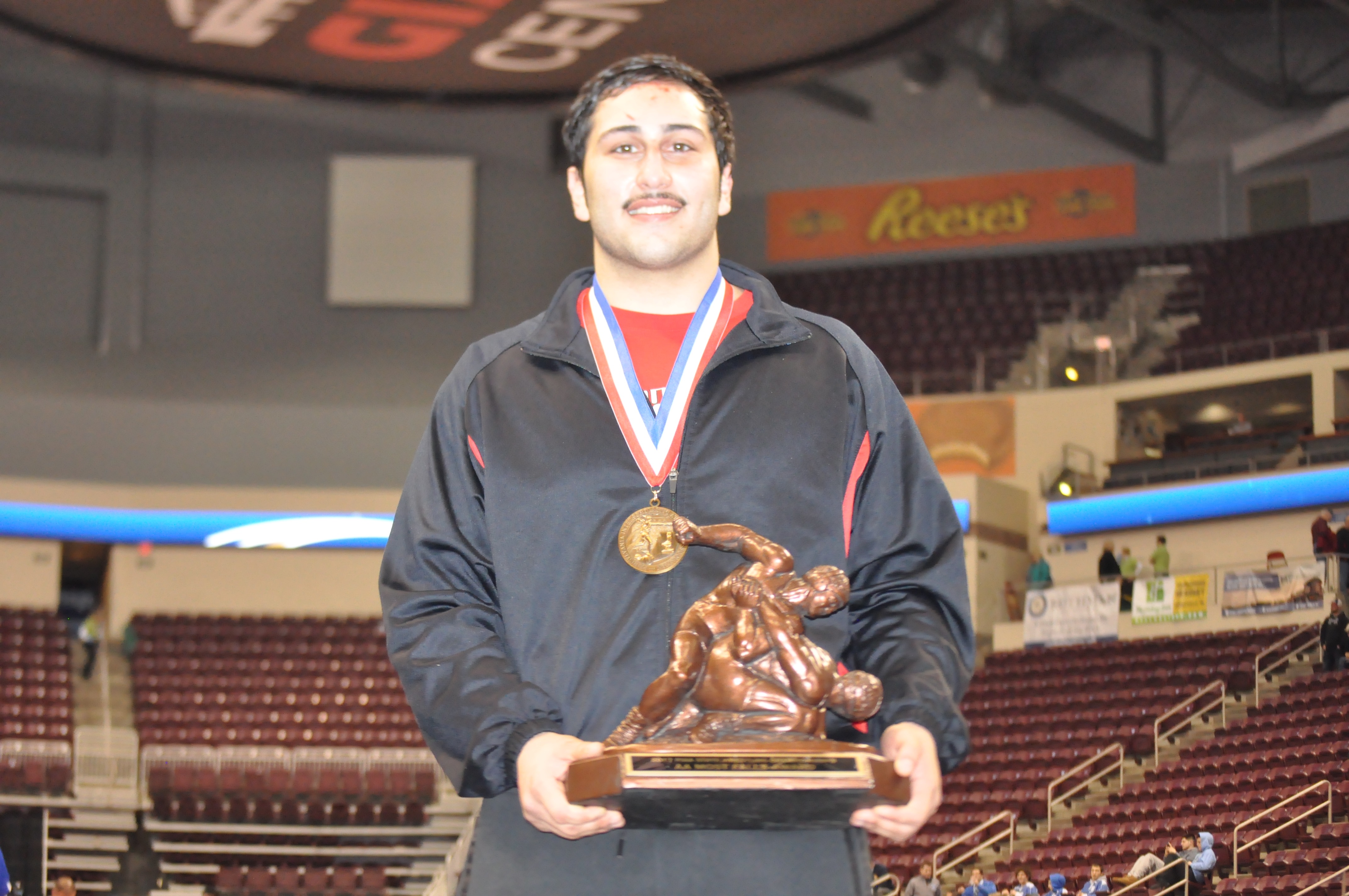 It was another remarkable season for Saucon Valley wrestling.  A season that ended with a referee smacking the mat in favor of the Panthers at the PIAA AA State Wrestling Championships in Hershey.

Congrats to all Panther wrestlers, the Source is with you!