A still from the trailer for "Divided States." 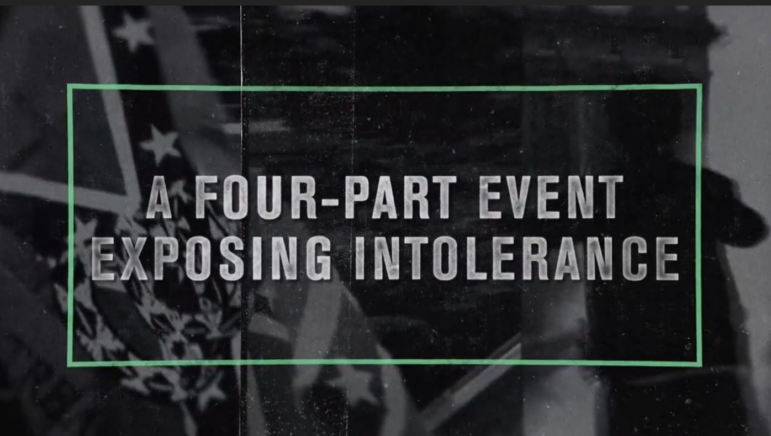 A still from the trailer for “Divided States.”

The hashtag for A&E Network’s upcoming four-part documentary series about racism in the U.S. and abroad, “Divided States,” is trending on Twitter, where several high-profile civil rights organizations such as the NAACP and the Anti-Defamation League (ADL) have used it to help draw attention to the program in recent days.

The first of four episodes of “Divided States,” “Hellertown, Pennsylvania,” is about racism in the Saucon Valley School District and will air Monday, March 5 at 9 p.m.

The documentary was filmed last summer and fall by a production crew from Lincoln Square Productions–ABC News’s documentary division.

It generated controversy among some district parents and residents because production staff received approval from the superintendent at the time to film in schools with little to no input from the school board. Permission was later suspended, and producers voluntarily withdrew from filming in the schools but remained in the community to film local events and interview individuals, families and business owners.

According to a March 1 tweet by the ADL, a recent A&E panel about the series was “an informative and powerful panel on the state of #hate in America.”

Thanks to @AETV for hosting an informative & powerful panel on the state of #hate in America. #DividedStates pic.twitter.com/KmWwG0Rx8I

“It starts at the dinner table. We have to talk about this stuff, because it’s not going away,” ADL CEO Jonathan Greenblatt is quoted as saying during the documentary panel discussion.

“It starts at the dinner table. We have to talk about this stuff, because it’s not going away” - @JGreenblattADL on how we educate our youth to stand up against #hate. @AETV #DividedStates pic.twitter.com/HHUywJXV4R

“A&E’s ‘Divided States’ documentary series explores the ways in which racial tensions and hate crimes are affecting communities in the United States and Europe,” the ADL website states. “It also explores how community members are confronting and addressing this problem. ADL has partnered with A&E to provide lesson plans and parent resources to help you discuss these issues at school and at home.”

Join us along with @AETV for #DIVIDEDSTATES, premiering Monday, March 5th at 9pm ET! It’s a provocative and powerful series about race, hate and bias in America. Be sure to tune in! pic.twitter.com/RDmoYeO9GD

@FeministaJones also promised a live tweet during the airing:

Join me Mon 3/5 and 3/12 at 9pm est for a live-tweet of @AETV's #DividedStates, a powerful series that looks at race and bias in America https://t.co/2cZY7EzHDT pic.twitter.com/HCBzC55NRa

Below is the official trailer for Divided States:

Below is A&E’s series description along with individual episode summaries:

In this original documentary series, A&E takes an in-depth look at how racial tensions and hate crimes are impacting communities in the United States and Europe, and how community members are confronting the problem and fighting back.

A fight between students at a Pennsylvania high school leads to assault charges and an investigation into a racist video posted on Snapchat.

A man shouts racial slurs at two teens on a commuter train, prompting three male passengers to intervene. In the ensuing altercation, the man allegedly stabs the three men, killing two of them and wounding the third.

A Kansas gunman allegedly opens fire on two Indian nationals in a sports bar, killing one and wounding the other. An ex-Marine is also wounded trying to stop him.

Fueled by terror politics and the refugee crisis, a surging tide of right wing nationalism spreads across Europe, the likes of which have not been seen since World War II.