At Notre Dame-Green Pond Friday, the Panthers and Crusaders felt each other out the first few minutes of the game, but it was Saucon who got on the scoreboard first off a corner kick at 30:05. Sophomore Appoline Neveu served the ball into the box and Brooke Riefenstahl redirected it into the back of the net with her hip. 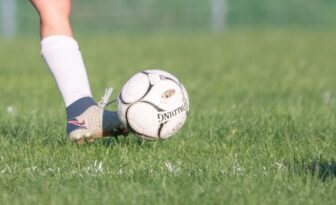 About 15 minutes later, the Panthers struck again when sophomore Maria Donahue finished Caroline Gilbert’s cross to the far post. Saucon Valley’s two-goal lead was short-lived, however, as the Crusaders answered for a score off a free kick from about 25 yards away. At the end of the 1st half the Panthers held a 2-1 lead.

The 2nd half was all Panthers. Lauren Giles knocked home another Appoline Neveu corner kick at 38:05. Then senior Brooke Riefenstahl threaded a pass into the box where classmate Seri Johnstone finished for the score at 17:40. Finally, at 5:54, Donahue claimed her second goal of the evening when she cleaned up a loose ball in front of the Crusader net.

When the final buzzer sounded, the Panthers had defeated the Crusaders 5-1.

“This game was one of our best efforts at controlling the ball and setting up quality shots,” commented Coach Stevie Ochse following the win. “We constantly had multiple passing options and used combination play to exploit NDGP’s defensive weaknesses. One of our many standouts was Kat Naiburg, who had a great defensive game.”

Saucon Valley improved to 11-0 in the Colonial League with the win. With the loss, Notre Dame fell to 3-6-1.

Up Next: The Panthers look forward to a 4 p.m. regular season finale against rival Palisades on Wednesday, Oct. 10.

About This Series: Andrew & Sonya Hughes of Hellertown are sponsoring girls soccer coverage on Saucon Source to help recognize the achievements of female high school athletes here in Saucon Valley, and in tribute to their own daughters, who were both stand-out student athletes at their high school, where they played softball, soccer, basketball and field hockey. Between the two of them they earned 14 varsity letters in high school. “Female athletics was a big part of our family life for many years, but that journey ended at the high school level six years ago,” Andrew Hughes says. “Through those amazing experiences we also noticed that females don’t seem to have the same level of exposure and support as their male counterparts. So we are very sensitive to situations where we perceive an imbalance of exposure of female student athlete participation in competitive high school sports. We also like to encourage greater involvement of young people in athletics. We would like to help the girls gain more exposure at your news source by adopting some girls high school teams.” Saucon Source thanks Andrew & Sonya Hughes for their thoughtful and generous support of our local sports coverage.