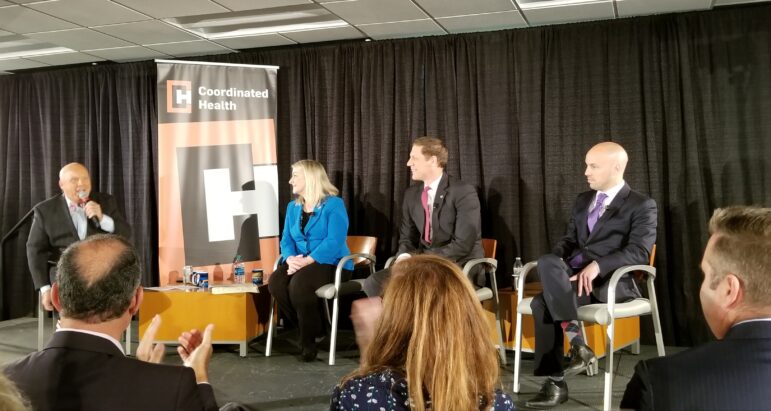 PA 7th District Congressional candidates Susan Wild (D), Marty Nothstein (R) and Tim Silfies (Libertarian) appear on stage during a debate that was filmed for later airing at Coordinated Health in South Whitehall Township Tuesday. The moderator of the debate was Greater Lehigh Valley Chamber of Commerce President Tony Ianelli. It will air in two parts on Ianelli’s “Business Matters” on WFMZ-TV Channel 69 later this month.

The three candidates vying for the U.S. Congressional seat last held by Charlie Dent faced off in an hour-long debate videotaped for later airing before a live studio audience at Coordinated Health in South Whitehall Township Tuesday, where they shared their differing views on a wide variety of issues.

The debate, which was moderated by Greater Lehigh Valley Chamber of Commerce President Tony Ianelli, will air in two parts on Ianelli’s “Business Matters,” which will be broadcast on WFMZ-TV Channel 69 at 7:30 p.m. Monday, Oct. 15 (Part I) and 7:30 p.m. Monday, Oct. 22 (Part II). GLVCC Executive Vice President Michelle Young said it will also air nationally on C-Span, although a time and date for that airing wasn’t announced.

All of the following questions/topics were audience-generated, Ianelli said.

Should the minimum wage be raised to $15/hour? 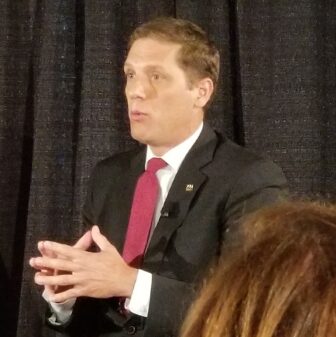 Nothstein said U.S. markets should dictate what the minimum wage is. He said a proposed increase to $15/hour would disproportionately hurt seniors, because it will raise costs across the board.

Silfies said that in his capacity as a former business reporter for WFMZ he spoke to many local entrepreneurs who told him they won’t be able to afford to pay their employees if the minimum wage is raised. “I think the market should determine it,” he said.

The current state of the U.S. economy

Wild said the “economy is great if you are able to invest in the stock market” and well-off. Working families and young people in particular are being left behind economically, she said.

Silfies said there needs to be an effort made to balance the budget.

Nothstein said the economy is in good shape with “more jobs than we have people willing to work” and the lowest unemployment rate in the U.S. since 1969. “People are happy,” he said. “People have jobs.”

If elected will you make an effort to be bipartisan? 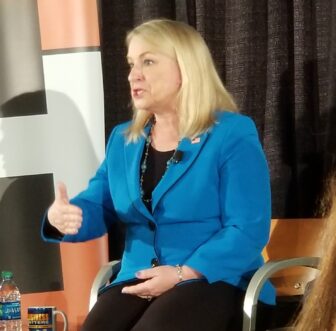 Nothstein said he will be an independent voice in Washington, D.C. “To me it’s all about getting things done,” he said. “We need to make sure we elect people who are willing to work with both sides.” He added that education needs bipartisan support in Congress.

Wild said she will work with Republicans on improving infrastructure in an effort to be bipartisan, and cited former Republican Congressman Dent’s willingness to go against the grain within his party by voting against the repeal of the Affordable Care Act as a type of opposition she called “civil and dignified,” though not necessarily bipartisan.

Nothstein said he is “the only candidate who has taken a term limit pledge” and added that he won’t take a government pension if he’s elected.

Wild said she has spent 30 years working as an attorney and finding resolutions for her clients, which will be an advantage in Washington. Nothstein noted that “we have a lot of attorneys and lawyers in Washington. It hasn’t really been working.” Wild rebutted his comment by saying there is a “good reason” for that. “It’s because Congress makes laws.”

Nothstein said the process that surrounded Kavanaugh’s appointment was “embarrassing.” He added, “I think it was mishandled by both sides.” 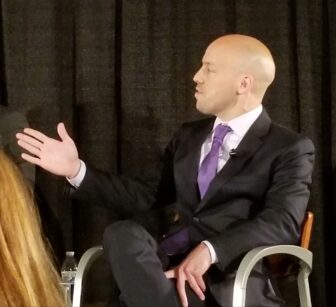 Wild questioned what impact the process had on Dr. Christine Blasey Ford, who testified at the Congressional hearing that was held before Kavanaugh’s appointment that he allegedly sexually assaulted her. Because her credibility was then questioned, Wild said Ford and her family have become victims of what she called an overly-politicized process.

Silfies said “both sides just wanted to win.” He added, “It’s a great endorsement for term limits on the Supreme Court.”

In answer to a follow-up question by Iannelli, Wild said she would not support impeaching Kavanaugh if she were elected. “I want to go to Washington to get things done,” she said.

Nothstein said he feels sympathetic toward Kavanaugh, because he said he too was falsely accused of “something that never happened.” He said the impact on him and his family was “devastating” and called the allegation of sexual misconduct “a political hit job.” Said Nothstein, “It’s in the past. I can relate to Brett Kavanaugh.” Note: The same day as the debate, Nothstein announced that he is suing The Morning Call and the Velodrome Fund Inc. for defamation for allegedly conspiring to discredit him.

Silfies said the U.S. needs more legal immigrants and that the government needs to make it easier to legally immigrate here. He said he is not in favor of getting rid of Immigration and Customs Enforcement (ICE), but also doesn’t “think we need an internal force.”

Wild said “our immigration system is broken, and it has been for a number of years.” She said “we need to take a hard look at ICE.” She added that she would like to see the department reformed rather than abolished.

Nothstein said he supports expanding ICE. “I think we need more ICE agents,” he said. “We’re not enforcing laws.” He added that he supports a merit-based immigration policy.

Building a wall between the United States and Mexico

Wild said she opposes building a wall, and called the proposal/campaign promise by President Donald Trump “a ridiculous waste of taxpayer money.”

Silfies said he believes the U.S. should build a technological wall to protect its people and interests, rather than a physical border wall.

Nothstein said he believes a wall should be just one part of the country’s immigration enforcement strategy.

Wild said the U.S. needs campaign finance reform. She said that as a candidate she doesn’t and won’t accept corporate political action committee (PAC) money. She added that she believes it takes too much money and time to run for elected office.

Silfies said voters should “follow the money.” He said 35 percent of Wild’s money comes from PACs and committees. “It’s not a baker in Hellertown contributing,” Silfies said.

Wild responded to Silfies’ comment by saying some of the PAC money she has received is from organizations like Planned Parenthood and consists of many small donations.

Nothstein said it is hypocritical for Wild to say she won’t take corporate PAC money but will take special interest PAC money. She then responded by saying Nothstein has taken money from the National Rifle Association (NRA) and insurance companies, which she called “a conflict of interest.”

Silfies said he is a strong supporter of the Second Amendment, not because he is a hunter or NRA member, but because “I come at things from a philosophical perspective.”

Wild said that as a “big believer in the entire U.S. Constitution” she is “not interested in taking away anybody’s guns.” She said believes in “reasonable limitations” on gun ownership in order “to curb gun violence.” “If we don’t do something,” she said, “we risk a world in which children don’t feel safe going to school.”

Nothstein said he has an “A” rating  from the NRA, while Wild has an “F” rating. Wild responded by saying she doesn’t know why she would have an F rating, unless it is because she refuses to accept money from the NRA.

Nothstein said he believes the government should stay out of health care. He said he doesn’t believe the Affordable Care Act can be abolished, but its dismantling should continue. He said abolishing the ACA’s individual coverage mandate was a good thing.

Wild said she believes people with pre-existing conditions must be protected under the country’s health care system.

Silfies said health care should be regulated at the state level. “We need to stop centralizing control of health care in Washington,” he said.

Wild said she is concerned about the economic impact student loans are having on Millennials, who are becoming “a generation of debtors.” She said she wants to lower the cost of debt for new students and restructure student loan debt for those who already have it.

Nothstein said he agreed with Wild. “We also need to encourage kids now to look at trades,” he said, because the country needs skilled workers.

Silfies said he agreed with Nothstein that the U.S. needs more skilled workers. “I don’t know why politicians are always insisting  that everyone needs to go to college,” he said.

Nothstein said he is happy with the president’s foreign policy. “I like the way our president’s been handling everything,” he said, adding that Trump “is the first leader to sit down with North Korea.” According to Nothstein, Trump “has terrorists on the run.”

Silfies said Congress should have a more active role in U.S. foreign policy. “I think they should act as a check on the presidency,” he said.

Silfies said he thinks marijuana should be legalized and America’s longstanding ‘War on Drugs’ should be ended. He said he lost a close friend to a heroin overdose and called addiction a health issue that should be treated as such, rather than criminally.

Wild said she is “in favor of legalizing marijuana but with all of the same attendant laws as with alcohol.” She said it can be a source of revenue for the government if it’s legalized. She criticized the fact that Veterans Administration hospitals cannot administer medical marijuana to patients because it is an illegal drug–even for medical use–at the federal level.

Nothstein said his first priority would be to tackle the growing national debt. “Tough decisions need to be made,” he said. He said he has made those decisions as a Lehigh County commissioner and will bring that experience with him. Silfies interjected that Republicans often say they will cut the national deficit while campaigning, but once in office they are actually big spenders.

Wild said the recent Republican tax bill Congress passed added $3 trillion to the national debt. She said that if elected her top three priorities will be campaign finance reform, health care and crumbling infrastructure. She said campaign finance reform is her first priority because campaign money “affects every single issue that Congress votes on.” She said she thinks there is too much “dark money” and “big money” in politics.

Silfies said that when it comes to campaign finances, voters should “follow the money.”