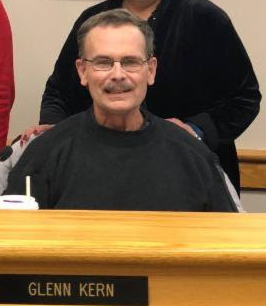 Glenn Kern, 62, had served on township council since 2001–and was at one time council president–but poor health in recent years has affected his meeting attendance.

His continued ill health wasn’t directly mentioned at the council meeting but was alluded to in comments made by council members prior to the vote.

“This is very sad,” said council president Sandra Yerger, who is also a longtime council member. “He was a genuine leader on this board for many, many years.”

Council vice president Priscilla deLeon agreed, and recounted one of Kern’s greatest accomplishments during his tenure: the preservation of open space in the township.

“He started (on council) with wondering what we’re going to do with our open space,” she said, noting that that passion ultimately helped lead to things such as the development of Polk Valley Park, which is now a popular recreation area. “We accomplished a lot in this township because of him.”

Kern first suffered a debilitating illness that affected his hearing and motor skills about five years ago, and he has intermittently been absent from meetings–sometimes for months at a time–since then. At one point a crowdfunding campaign was established on behalf of him and his family to help pay for expenses related to his illness and treatment.

Along with his family, “he just needs our prayers right now,” deLeon said.

Council has until Dec. 20 to appoint his replacement, who will serve for the next year and have the opportunity to run in a special election next year to complete the remainder of the term, council solicitor Linc Treadwell said.

Resumes and letters of interest must be received by township manager Leslie Huhn by Friday, Nov. 30, and can be submitted by postal mail or email to manager@lowersaucontownship.org.

Candidates for the vacant seat will then need to attend the Wednesday, Dec. 5 council meeting, at which council plans to select an appointee, who will be sworn in to office at their final meeting of the year on Dec. 19.

The only requirements for service on township council are:

Council plans to advertise the vacancy on both the township website and social media.