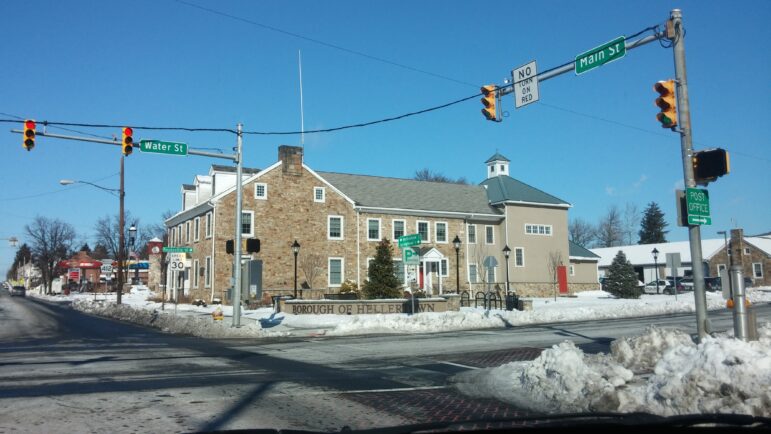 Several residents came to the meeting prepared to speak out about their belief that two police officers would be laid off, which council president Tom Rieger said was untrue.

“We are not laying off two officers,” he said. “Wherever that information is out there, it’s incorrect.”

Rieger said one of the two officers whose salaries and benefits were formerly funded with casino grant money will remain employed because council is opting to use money from the borough’s general fund, i.e. local tax dollars.

The other officer’s salary and benefits were “never in the budget…or funded from local dollars, so it cannot not be removed to balance the budget,” he said in a message.

Each full-time officer’s salary and benefits together cost about $130,000, which equals the revenue generated by one mill in taxes, Rieger said.

Additionally, the borough’s insurance premiums have increased by more than 6 percent over the past year, and it has contractually-mandated raises of 2.5 to 3 percent that it must pay to police and public works employees.

“We are fast approaching the max millage we can tax,” Rieger said, noting that the borough already has one of the highest tax rates in the county.

“There are no more ‘Hail Marys’ in that playbook. This problem resides with the state,” he said, referring to the passage of the former gaming law that created the municipal grant system. The law was later struck down by the state Supreme Court as unconstitutional.

As it is, the .75 mill tax increase will mean a $75 increase in the annual property tax bill for a Hellertown homeowner whose property is assessed at $100,000.

Helpful Hint: Most homes in Hellertown are assessed at less than $100,000. To find out what your home is assessed at, look at your most recent tax bill.

“In order to fund that (other) officer, we would have to raise taxes almost two mills,” Rieger said. “And next year the same thing.”

He added that “at the end of the day (balancing the budget is no longer) taking $1,000 from here. It’s ‘We’re no longer doing road paving.'”

In part, Rieger said that is because in the past the borough’s infrastructure needs were ignored for too long.

Resident and former councilwoman Gail Nolf spoke to council about the importance of the borough police maintaining public safety by employing a robustly-staffed force prior to Rieger’s comments and clarification that the borough would not be laying off two officers, but rather one instead.

She said Hellertown’s ability to attract new businesses, insurance rates, home rates and many other things could be compromised if its investment in public safety is lacking.

Rieger urged Nolf and others who are upset over the loss of the gaming grants–which were intended to help communities cover casino impact-related expenses–to write to their state senators and representatives about the matter.

The state senator for Hellertown borough and Lower Saucon Township is Lisa Boscola (D-18), whose office can be reached by emailing SenatorBoscola@gmail.com or calling (610) 868-8667. Boscola’s main office is located at 1 E. Broad St., Ste. 120, Bethlehem, Pa.

The state representative whose district includes the borough and part of Lower Saucon Township is Robert “Bob” Freeman (D-136). Freeman’s office is located at 215 Northampton St., Easton, Pa., and he can be reached by calling (610) 253-5543 or by email via the contact form on his website.

The vote to adopt the approximately $4.4 million 2019 borough budget with the .75 mill tax increase and a $10 across-the-board increase in the sanitation rate paid by residents was not unanimous.

Councilman James Hill was absent and newly-appointed councilman Andrew Hughes voted against it.

In an email to Saucon Source, Hughes said he has worked diligently to come up to speed on the budget since his appointment to council last month.

“The Borough Manager (Cathy Hartranft) and Police Chief (Robert Shupp) were very helpful…in explaining to me their submissions and how the major increase in employee healthcare costs and the significant impact of losing the casino grant for the police officers drove the real spending growth in the borough’s 2019 budget,” Hughes said. “However, I am also keenly aware of the borough’s revenue limitations and that Hellertown’s millage rate is the second highest in Northampton County and significantly higher than our neighboring municipalities.”

“We also need to be careful we are not providing services to folks outside of Hellertown and having our residents shouldering those costs,” he added.

Hughes said, “I voted against this budget as I don’t believe it is equitable to all members of our community and have concerns of how our borough finances are trending for the future. While we have significant financial obstacles in front of us, I want everyone to know I will work as hard and as intelligently as I can with the HBC team to ensure that we provide the best possible services at the most reasonable costs going forward.”

If anyone has questions about the budget that was approved, Rieger said they can contact him directly via email to ask them. His email address is t.rieger@hellertownborough.org.

Monday’s meeting was the last of 2018 for Hellertown Borough Council.