Lower Saucon Township Council voted at its Jan. 16 meeting to support a resolution to redraw state and federal legislative districts within the township.

Council voted after listening to a presentation by Dr. Frederick “Fritz” Walker on behalf of Fair Districts PA. The group encourages municipalities to support its resolution for an independent citizens commission to lead the process of redistricting to avoid gerrymandering.

Redistricting is the process of redrawing voting district lines to reflect population changes and happens every 10 years following each U.S. census.

Gerrymandering is the process of manipulating legislative district boundaries so as to favor one party. Walker called it “as old as America, almost.”

The size and shape of districts is updated as populations change to ensure that each lawmaker continues to represent a fair portion of the population.

However, according to Fair Districts PA, few rules govern exactly how districts are drawn, allowing the majority party to manipulate district boundaries to promote their own interests.

Walker added that Pennsylvania was the third-worst state for gerrymandering in 2016.

In 2011, a PA Supreme Court decision found the state’s congressional district map violated the state constitution. As a result, new maps were drawn.

Fair Districts PA wants the state constitution to be amended to establish an independent citizens commission to lead the process of drawing fair districts. They anticipate that the 2021 map will be gerrymandered and hope the amendment will be voted on by the state house by that time.

More information on Fair Districts PA can be found at their website here. 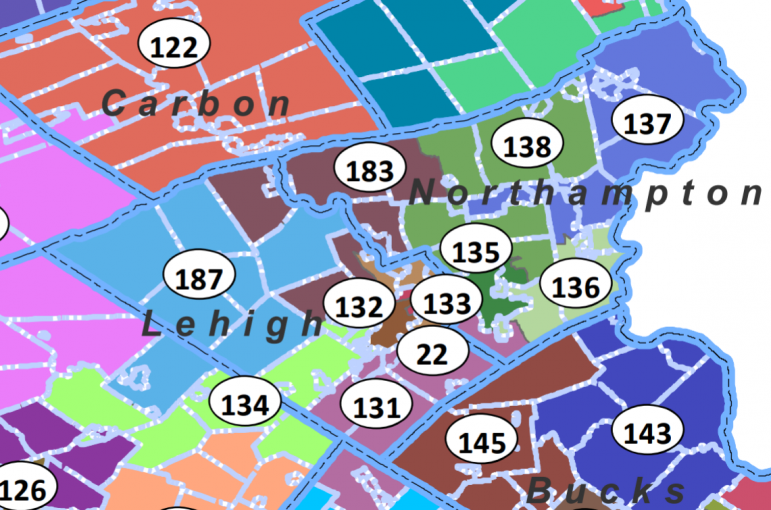 After the 2012 PA legislative redistricting the Lehigh Valley was a patchwork quilt. The Saucon Valley is split between two legislative districts, with Hellertown borough and eastern Lower Saucon Township in District 136–represented by State Rep. Robert Freeman–and western Lower Saucon Township in District 131, which is represented by State Rep. Justin Simmons. To view the full map, click here.

In other business, council also amended and approved a new career development policy for the township police department. The policy was created based on the results of a Matrix study it participated in 2017.

According to Chief Tom Barndt, the new policy offers fair and transparent requirements for promotions within the department. It also aims to develop leadership skills among officers and enhance the entire police force.

The survey would be created with SurveyMonkey and would allow residents to vote on several choices for Trick-or-Treat dates and times, including Halloween night.

Mayor David Heintzelman announced earlier this month that there will be a discussion about when to hold Trick-or-Treat on Hellertown Borough Council’s Monday, March 4 meeting agenda.