In the wake of a winter storm that generally deposited three to four inches of snow on the area early Saturday, another more potent snowstorm is taking aim at the Lehigh Valley.

The National Weather Service has issued a winter storm watch for Lehigh and Northampton counties for 6 to 8 inches of snow as well as a small amount of ice from Sunday afternoon through Monday morning. 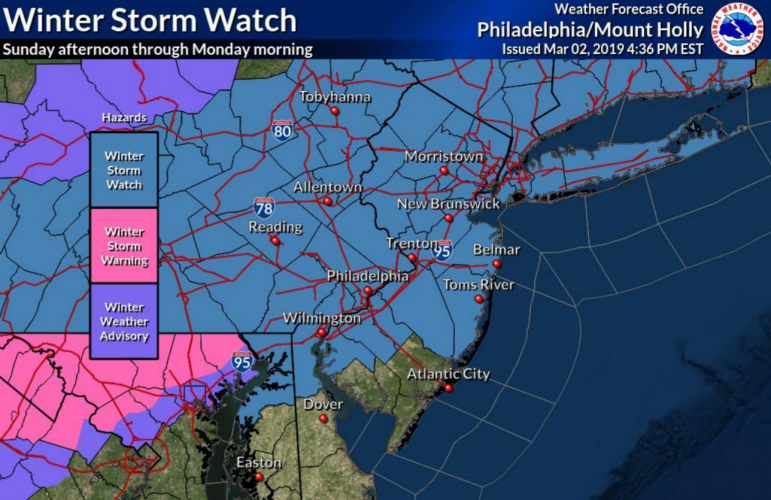 A map distributed by the National Weather Service office at Mount Holly, N.J., shows the number of counties that are now under a winter storm watch, a winter storm warning or a winter weather advisory throughout northern Delaware, northern Maryland, eastern Pennsylvania, southern New York and New Jersey.

“Travel could be very difficult” as a result of the snow, the NWS said in a statement Saturday afternoon.

In a weather briefing about the storm, forecasters from the NWS’s office in Mount Holly, N.J., concurred, saying “we are increasingly concerned about snow rates. The snow, or a combination of snow and sleet, may accumulate in a short period of time, leading quickly to hazardous road conditions.”

The Lehigh Valley and northern suburbs of Philadelphia are in an area where 5 to 8 inches of snow is likely to accumulate, with isolated amounts of up to 10 inches possible at elevations of 900 feet or greater, he said.

“Over the last 24 hours, model guidance has come in colder and more southeast with tomorrow into Monday’s snowstorm,” Corrigan said. “While we still expect significant snowfall for a good portion of Pennsylvania, we had to lower our max range a little bit due to the more progressive nature of the storm that is now expected.”

Snow will develop from west to east Sunday afternoon and will begin to accumulate mainly after 5 p.m., with the storm exiting the area before Monday morning’s rush hour begins, Corrigan predicted.

In the wake of the storm temperatures are forecast to plummet early in the week to levels that are well below normal for this time of year.

High temperatures Tuesday and Wednesday will be below freezing, and overnight lows could drop to as low as 8 degrees, according to the latest NWS forecast for the Lehigh Valley.