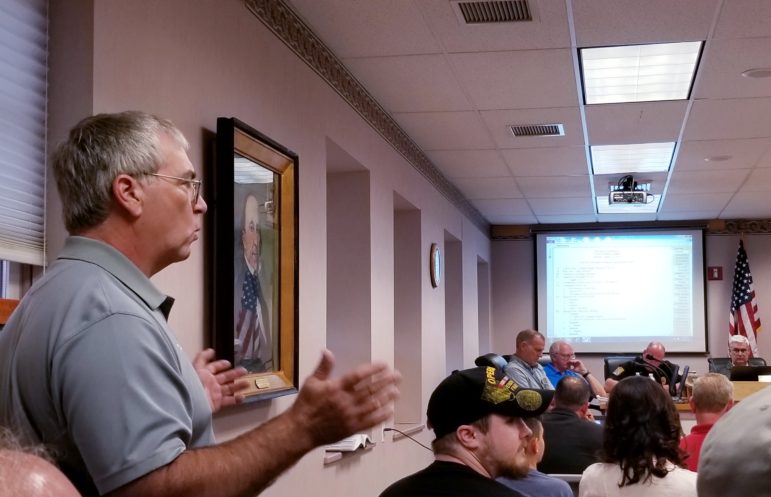 Emmaus resident and South Mountain Defense LLC owner David Paul testifies on behalf of Lloyd Tactical and owner Bryan Lloyd during a public hearing about the gun shop held Monday night before Hellertown Borough Council. South Mountain Defense “is dedicated to the advancement of firearms knowledge and use as well as protection for self and families,” according to the business’s Facebook page.

Hellertown Borough Council voted 5-2 Monday to approve a proposal by Lloyd Tactical to relocate their gun shop from 1850 Friedensville Road in Lower Saucon Township to a former yoga studio at 766 Main Street in the borough, but not before several residents said they objected to the new location for various reasons.

In considering the proposal, council members were told they needed to weigh it against the following seven criteria, which were highlighted by borough council Solicitor Michael Corriere during a lengthy discussion that included nearly 45 minutes of comments during a public hearing that was required to be held:

Also given weight by council was feedback regarding the proposal from borough police chief Robert Shupp, who said his department is not worried about Lloyd operating a safety-conscious business.

His official stamp of approval, however, was not likely to change the minds of those who attended the meeting to oppose the gun shop, including borough resident Frank Pazzaglia.

Responding to Lloyd’s testimony that his business sells guns, ammunition, scopes and “anything to do with hunting,” Pazzaglia said “tasteless slogans like ‘Come and Get It'” printed on Lloyd Tactical merchandise sold online to him indicate that “the website and presumably the business is political.”

“This store caters to a different clientele than a sportsperson,” he said, adding that it will open amid an “atmosphere of escalating violence” throughout the country. He then held up the the Aug. 4 edition of The Morning Call, in which a front page headline announced three recent mass shootings.

Shupp, during his questioning, told council that if someone wants to commit a mass shooting, they can obtain a gun illegally in order to do that.

He said the fact that borough police recently recovered two stolen firearms in the City of Bethlehem is proof that stolen guns are already on local streets.

Another borough resident, Jeff Fink, said he didn’t think the gun shop would be in keeping with the atmosphere of a downtown that has undergone revitalization in recent years, with the opening of a nearby brewery, restaurants and retail businesses.

“I walk through New Hope a lot,” Fink said. “One thing I never hear people say is, ‘We need a gun shop.'” 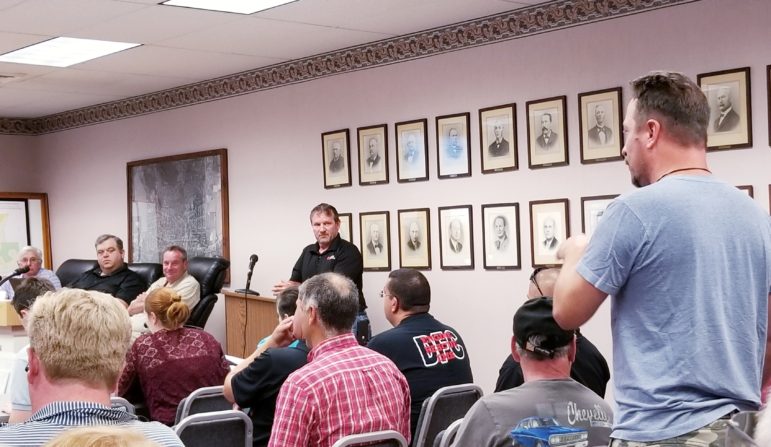 Others who attended the meeting spoke in favor of the gun shop and attested to the character of its owner, who opened his business in the Society Hill shopping plaza last October after several residents of the nearby Society Hill community said they opposed it.

In response to objections raised by several people that Lloyd will be selling AR-15s–a type of rifle that has been the subject of vilification in national conversations about gun ownership–Paul said there is no justification for fearing that particular type of firearm.

“The term ‘assault rifle’ doesn’t exist,” he argued. “AR-15s are nothing more than civilian sporting rifles.”

Lower Saucon Township resident Glenn Hoffert agreed, and told council the AR-15 is a legal hunting weapon in Pennsylvania as well as in 48 other states.

Hoffert said that when he was selling a gun on consignment at Lloyd Tactical, he had to pass a background check in order to retrieve it to sell it elsewhere.

“He sells an honest product,” Paul said. “He does it well within legal limits.”

Lloyd said he will have security measures in place in his store that exceed what is required by the Bureau of Alcohol, Tobacco & Firearms (ATF), which regulates the retail sale of guns in the United States.

In addition to a central alarm that will be connected to the county’s 911 system, he said he will have security cameras monitoring the store, motion detection sensors, a safe in which all pistols will be stored when the business is closed and cable locks to secure the rifles at night.

Lloyd also agreed to maintain a database of gun sales which the Hellertown Police Department will be able to access, and to maintain all of the state and federal licenses he is required to have in order to sell firearms.

“Every firearm that comes out of my building has to have a background check,” he told council.

Not everyone was satisfied, however, with the inventory he said he will stock.

Councilman Gil Stauffer commented that because weapons aren’t an “impulse buy,” he believes a gun shop doesn’t need to be on Main Street in Hellertown.

And Councilman Andrew Hughes, who said he is a lifelong member of the National Rifle Association (NRA), admitted to having mixed feelings about approving the proposal because he said he wasn’t sure whether the business would be in keeping with the character of the area.

Ultimately, Lloyd’s cooperative attitude and assurance that he will work with borough police in order to help keep Hellertown safe appeared to help win support from Hughes and councilman Phil Weber, who also questioned the sale of AR-15s and the “perception” that surrounds them.

Earl Hill and Stauffer cast the dissenting votes when a vote was called on whether or not to approve the conditional use application for the gun shop, which, after the meeting, Bryan Lloyd’s wife Beth said will likely open Labor Day weekend.

Lloyd said that in addition to his wife and himself, the store will have one employee, and will be open Tuesday through Friday from 11 a.m. to 6 p.m., and Saturday from 9 a.m. to 5 p.m.