Hello, everyone. I am excited to be bringing you another season of the Little Panther Rundown covering all of the local rising football and cheerleading stars in Saucon Valley.

I would first like to thank Bucks Run Oil, a local family-owned home heating oil and diesel supplier, for sponsoring this year’s coverage. They are a very friendly, community-minded business, and we are grateful for their support.

I would also like to recognize the coaches who have dedicated a lot of time to help the kids learn and enjoy the game of football. I know they have worked sometimes as many as five days a week to get the kids ready over the past month, and they are all excited for opening day this Saturday.

The home games are played right here in Hellertown’s Dimmick Park and the season opener will be held Saturday, Aug. 24 starting at 10:30 a.m. There will again be four divisions: Rookie Flag, Competitive Flag, 100 pounds and 120 pounds, and the games will proceed with those teams playing in that order.

There was a lot of roster turnover as most kids are usually only able to play two years in each division, so the coaches are having to adapt new people to their system as well as how they coach each player. The undefeated league-champion 120 pound team saw a large number of impact players move up to the junior high level, but are still focused on defending that crown. Coach Brown has had the team working hard at practice, and they look like they should be up to the task.

The 100 pound team saw a coaching change as Coach Hill retired, and was replaced by Coach Doklan, and there are a bunch of talented first year players coming up from the flag division. The team was better than the 3-5 record they posted last season, and are working diligently to improve their standing.

The competitive flag division saw a 4-4 record last season that could very easily have been 7-1 had there been an extra 20 to 30 seconds on the game clock. Coach Peters should have them playing well again, and the kids are excited to start the season.

The rookie flag team does not keep score, so there is no record to report. That division is primarily for introduction to fundamentals and learning. The kids played hard last year, and a few players from that team will be ones to watch as they grow.

The cheer squads have been putting in lots of work on their routines and are looking forward to strutting their stuff on the field.

Please come out to Dimmick Park this Saturday at 10:30 a.m. (*a 30-minute delay from the scheduled time) to show your support for the hard-working coaches, players and dancers as the Saucon Valley Panthers take on the Southern Lehigh Spartans.

The schedule for the rest of the season is as follows: 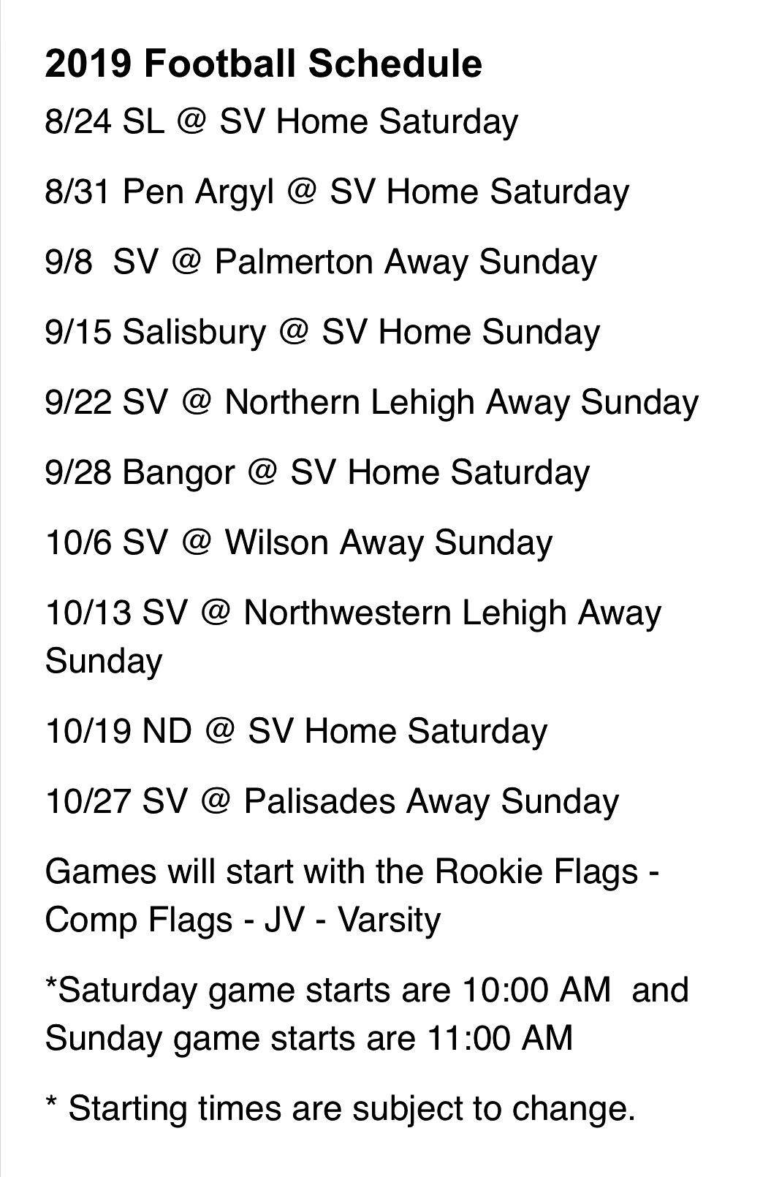 *As noted on the schedule the times and occasionally even the days are subject to change. I will report those changes as they occur throughout the season.

Note: Saucon Source thanks Bucks Run Oil LLC for helping to underwrite the publication of this year’s Little Panther Rundown. To learn more about them, please visit their website and follow Bucks Run Oil on Facebook and Instagram.