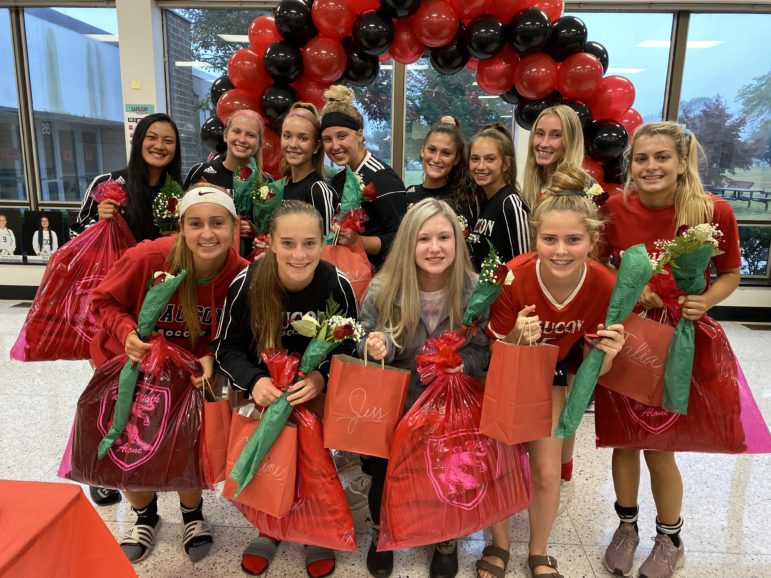 The 12 senior members of the Saucon Valley High School girls soccer team are celebrating their fourth consecutive trip to the Colonial League playoffs this season. The girls were recognized for their accomplishments at a Senior Day ceremony Thursday. The game that was originally to have been played Thursday vs. Notre Dame-Green Pond was rescheduled for Friday due to rain.

Despite Friday’s wind chill, the Saucon Valley girls soccer team (8-3-0) was red hot for their last home game of the regular season, capturing both a win over the Notre Dame-Green Pond Crusaders (4-6-1) and a chance to play for the Colonial League title in the postseason. For the seniors who were honored as part of Senior Day festivities after the game, this marks their fourth consecutive trip to league playoffs in their four-year career.

Then with 8:00 left in the first half, center midfielder, junior Sophia Riehl, pulled the trigger from 18 yards out, hitting nothing but net. The Panthers led 2-0 at halftime.

The Crusaders campaigned with 25:25 left in the game, drawing a direct penalty kick from just outside the box, indelibly denied by goalie junior Jackie Barbera. The signature steadfastness of the Saucon Valley defense held Notre Dame-Green Pond scoreless for a final score of 2-0.

“We knew going into the game that it would be hard-fought, so it was important for us to shoot and score early. The team really capitalized on hustle right from the start, allowing for an opportunity for Rachel (Starr) to cross a beautiful ball. That goal really set our pace for the rest of the game,” reflected Donahue.

On Saucon Valley’s sixth shutout of the season, defensive sweeper senior Lexi Guerrieri commented, “Cam (Gonsalves) and Ava (Albano) quickly adjusted well to playing up with us and they, including Rachel (Starr), have been playing a really strong defense…. Jackie (Barbera) and I haven’t had to do much of the dirty work this season because of them.”

“It’s a great feeling to score two beautiful goals in the first half against a quality team and to secure a spot in the Colonial League playoffs,” said Head Coach Stevie Ochse of the result.

Saucon Valley will be at home for the first of their three remaining games of the regular season, playing Freedom in non-conference action on Saturday, Oct. 5 at 3 p.m. Next the Panthers are off to Palisades High School in Kintnersville on Tuesday, Oct. 8 at 7 p.m. for their last league match, and finally they will travel to Crestwood High School in Mountain Top, Luzerne County, on Wednesday, Oct. 9 at 4:15 p.m.