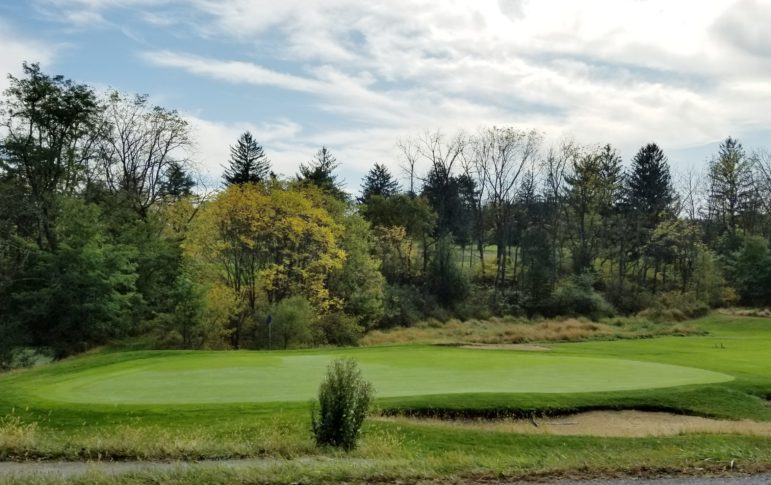 Locust Valley Golf Club is located on Locust Valley Road in Upper Saucon Township. An age-qualified community consisting of 125 single family homes will be developed by Traditions of America on the property.

The Upper Saucon Township Board of Supervisors voted Monday night to conditionally approve the final land development plan for a Traditions of America age-qualified development on the Locust Valley Golf Club property.

Plans for the development–already endorsed by the township’s planning commission–call for the construction of 125 single-family dwellings and a community center.

Several of the proposed homes will be located in Springfield Township, Bucks County. 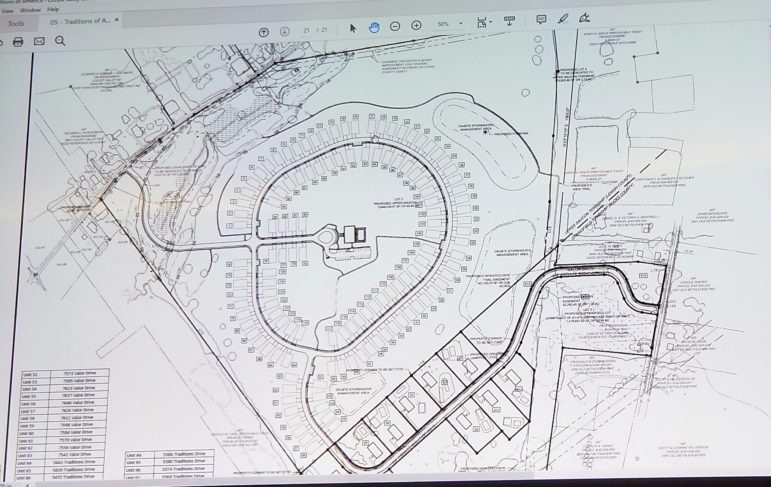 This plan for the Traditions of America development at Locust Valley Golf Club in Upper Saucon Township was displayed on an overhead screen at the Board of Supervisors meeting Monday.

The developers also plan to remove two dilapidated buildings on a seven-acre portion of the property located on the north side of Locust Valley Road, and they intend to construct a trail along the old trolley line to the east of the site.

Construction of the development is not likely to start until after this winter.

“We are still getting our government permits together,” a representative from Traditions of America said. “We anticipate hopefully breaking ground in the spring of 2020.”

The motion was passed despite residents’ concerns about the project.

A letter written by one of them, Brad Hetrich, was read before the Board of Supervisors.

In it, Hetrich alleged that details of the plans were never properly relayed to the public.

Hetrich also said Upper Saucon Township’s open space has been turned into housing and other types of developments at the expense of recreation areas.

“For a township that is supposed to pride itself on its ‘rural’ character and open space, this is abhorrent and inexcusable,” the letter read.

Duane Wetzel, an adjoining property owner, said he was concerned with the Traditions of America engineers’ ability to prevent water runoff onto his property.

Wetzel pointed out that the development slopes towards his property.

He also asked what the township’s intent is for a trolley line trail that “goes nowhere.”

Township manager Thomas Beil said the trail will link what is now the Locust Valley Golf Club to Lanark Road and Rt. 309. He assured Wetzel that once plans are formulated for the trolley line trail the township will touch base with the affected property owners.

Supervisor Stephen Wagner said he believes the Traditions of America development represents the “best possible outcome” for the township.

He mentioned that the redevelopment of the property has been a lengthy process, with plans of a higher density proposed for the site a decade ago. At one point, Wagner pointed out, there were five simultaneous lawsuits against the township by developers.

“I honestly believe that the township fought long and hard to get the best possible outcome considering that the owners of the golf course and developers had their heart set on using it for some kind of development rather than a golf course,” Wagner said.