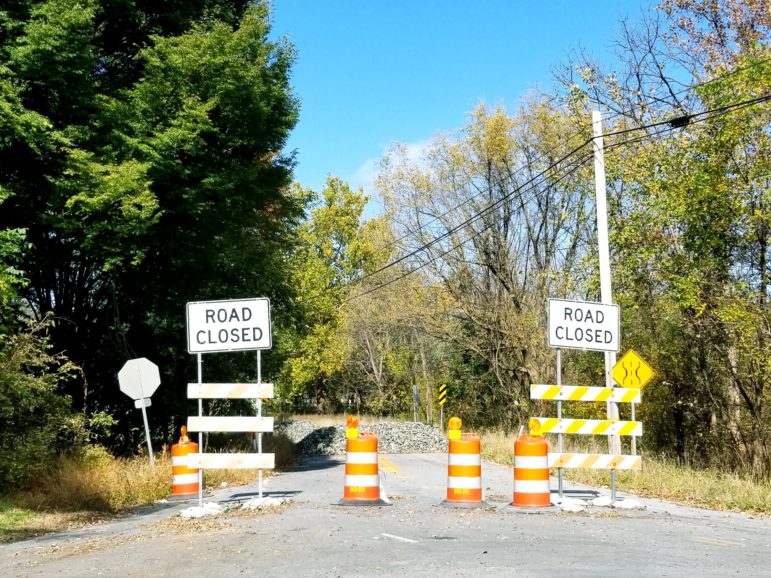 The Blue Church Road Bridge at Mill Road in Upper Saucon Township has been closed since flooding damaged it beyond repair in August 2018. A replacement project by PennDOT is planned for 2020.

Residents frustrated by the lack of progress on a bridge replacement project on Blue Church Road in Upper Saucon Township received an update from on it from township officials Monday night, although the news probably wasn’t music to anyone’s ears.

“The timeline (for the replacement) is really up to PennDOT,” township manager Thomas Beil told Upper Saucon Township supervisors at a public meeting.

Responding to a question about the bridge’s status from supervisor Kimberly Stehlik, Beil said his understanding was that PennDOT plans to put the bridge project out to bid over the winter, with work on it commencing sometime later in the year.

The 85-year-old bridge near Mill Road and Blue Church Road about a mile west of Coopersburg, has been closed since it was damaged by flooding in the summer of 2018.

“I’d say that by this time next year the bridge should be completed if they (PennDOT) stick to their current schedule,” Beil said.

He estimated that the construction of the new bridge should take two to three months.

Supervisors at the meeting voted to approve two temporary construction easements for land the township owns near the bridge; easements which were requested by PennDOT.

At the time of its closure, the Blue Church Road bridge was carrying more than 3,600 vehicles per day across a tributary of the Saucon Creek, according to PennDOT estimates.

In other business, Stehlik highlighted the fact that there will be a public meeting held to discuss and begin development of the Upper Saucon Township Comprehensive Recreation and Open Space Plan this Wednesday, Oct. 16 at 6:30 p.m. in the township municipal building, 5500 Camp Meeting Road, Center Valley, Pa.

The plan will help guide the township’s future development of parks, trails and other recreational facilities, and resident input is being requested as part of its development.