Where good food is served, friendship is sure to follow, and so it was that at Wasel’s Omelets at the Saucon Valley Farmers’ Market in Hellertown, a group of local veterans gathered to enjoy breakfast and catch up on a brisk November morning.

The meals were on the house in honor of Veterans Day and courtesy of business owner and borough resident Joel Wasel, but the men who enjoyed them weren’t there simply for free food. Most are not only regular customers but also friends, who enjoy the camaraderie they’ve found at the stand. One of them is Wasel’s neighbor, Donald “Don” Lewis, a spry 94-year-old World War II veteran and Purple Heart recipient who shared some of his story of heroism in the South Pacific nearly three quarters of a century ago.

Lewis was serving in the Navy and working as a cook on a patrol torpedo (PT) patrol boat when he was injured by shrapnel in an attack by Japanese forces off Cebu City in the Philippines.

He didn’t describe his injury, but another breakfast visitor said Lewis has shared his story of being wounded in battle with him before, and the pain from later having the metal shrapnel extracted from his body must have been intense. 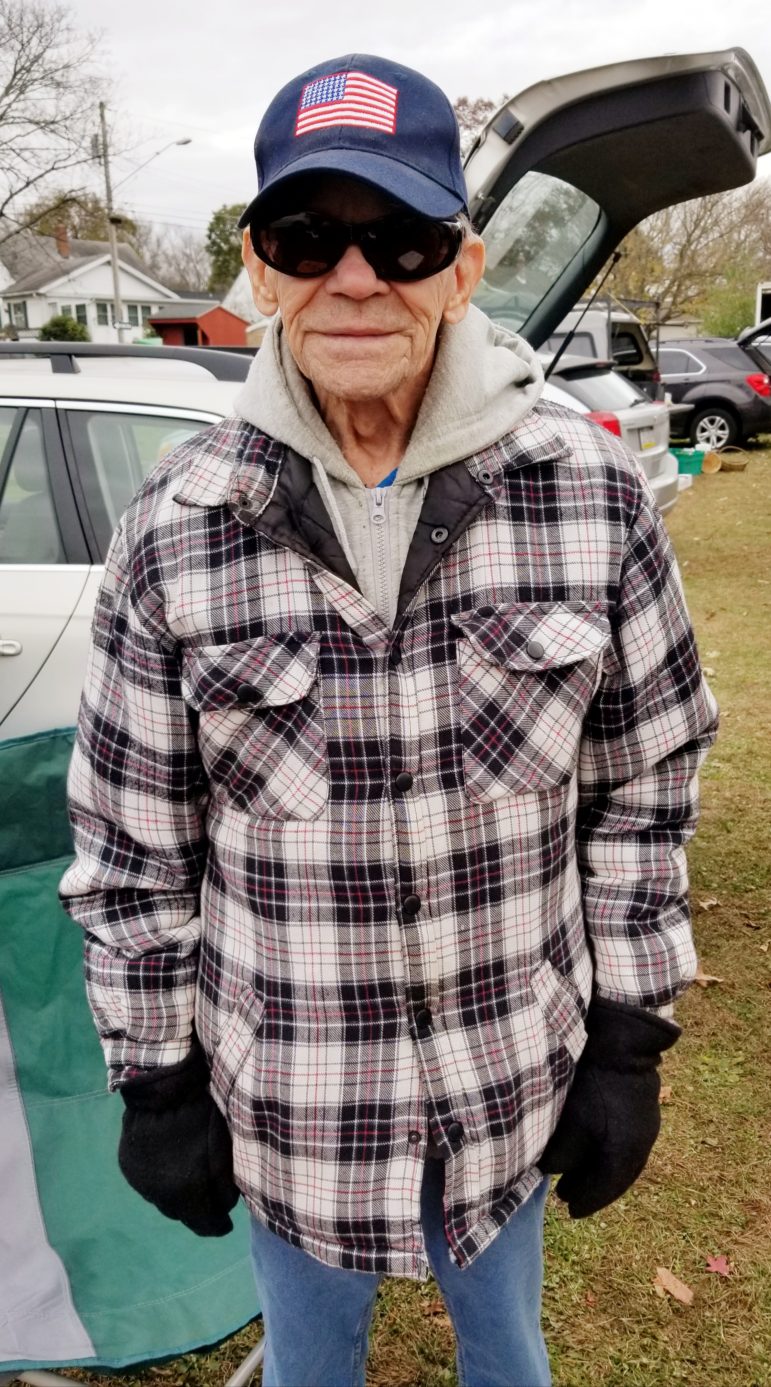 Hellertown resident Don Lewis, 94, was wounded while serving in the U.S. Navy in the Philippines during World War II.

“His combat assignment was to load the cannon when this all happened,” said Wasel, referring to the Battle for Cebu City, which took place between March 26 and April 8, 1945. Wasel has gotten to know Lewis over the years they have been neighbors.

After the war ended, Lewis returned home to New Jersey and began working at Bethlehem Steel. Tiring of a 22-mile commute, he eventually moved to Hellertown, where he purchased his home in the borough’s Mountainview neighborhood in 1960.

At the Steel Lewis first worked as an eagle-eyed scrap metal inspector.

He recalled that he wasn’t afraid to reject a railcar shipment that was “top-dressed,” meaning it had heavier and more valuable scrap on top of lighter scrap.

Companies that “top-dressed” scrap shipments were “trying to pull a fast one,” Lewis said, but he didn’t hesistate to put a large flag that said “Rejected” on those deliveries.

“I was making money for (Bethlehem Steel),” he said proudly.

Lewis was rewarded for his work ethic with career advancement, later becoming a technician in the company’s Homer Research Labs atop South Mountain, where he worked in Building H at the complex–which is today part of Lehigh University–until his retirement in 1982.

Several years after that he divorced his wife and remained single, enjoying pastimes like hunting and fishing, along with a retirement lifestyle that included drinking, which he said became a problem until he was able to quit cold turkey one day.

“What God did for me is awesome,” Lewis said of that experience.

One of Lewis’ sons, Mark, lives in Hellertown and has worked at Csencsits Auto Service for decades, and another son passed away at the relatively young age of 60.

For Lewis, who has faced adversity in his life more than once, there is still plenty of living to be done and that was clear from the conversations he enjoyed with others at Wasel’s Omelets, where he was eager and happy to talk about his life and accomplishments. 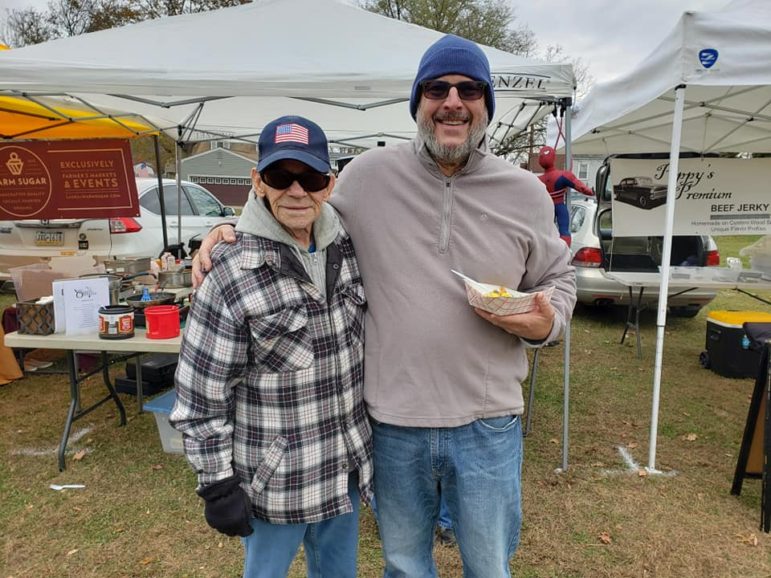 Saucon Valley veterans from different generations, Don Lewis (World War II), left, and Kurt Stelzer (Gulf War), bonded over breakfast and their shared experiences at Wasel’s Omelets at the Saucon Valley Farmers’ Market in Hellertown Sunday, where veterans ate for free. Stelzer was interviewed about his experiences in the military and as a local veteran by Hellertown resident and author Bill Broun for his new podcast, “My Private Hellertown: A Podcast About Life & Culture in Saucon Valley.” Listen to it here.

“There are not too many World War II Vets remaining,” noted Wasel, who said he is proud to be able to call Lewis his friend.

“(His) story should be told so we can get to know our neighbors,” he said. “It is also of great importance to me personally to recognize and respect my neighbors and friends, especially those who have served have served our country, because it is through their actions that makes our local community a better place to live.”

This Veterans Day, Saucon Source would like to extend our gratitude to Donald Lewis and all of our hometown heroes for their selfless service to our country. Thank you. 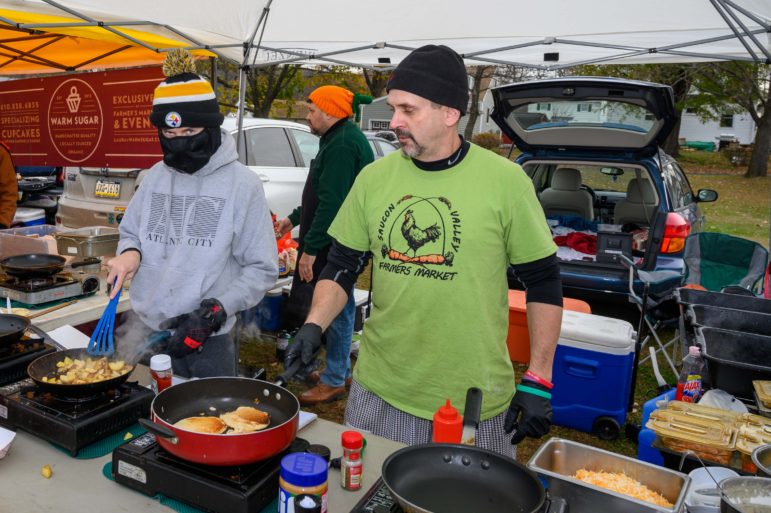 Joel Wasel and his son, Logan, of Hellertown, cooked up omelets, home fries, pancakes and other breakfast favorites at their every-other-week stand at the Saucon Valley Farmers’ Market in Hellertown Sunday. Veterans who visited the stand–including Wasel’s 94-year-old neighbor Don Lewis–received a free breakfast in recognition of their service to our country.