Organized by Lehigh Valley-based medical marijuana dispensary Keystone Canna Remedies, the conference was an opportunity for area residents to learn more about the rapidly-evolving medical marijuana landscape in Pennsylvania, and to meet some of the key figures and organizations operating in the state’s medical cannabis industry.

Close to 200 interested citizens, medical marijuana card owners, college students and members of the press attended the registration-only event, at which about a dozen hemp and cannabis vendors had information booths. Among the vendors who displayed products, provided information and gave away branded merchandise such as pens and drawstring bags were Ilera, Whole Plants, Remedi and Keystone Canna Remedies (KCR).

The main portion of the conference consisted of a series of speakers, including moderator Steve Schain of Hoben Law Group. 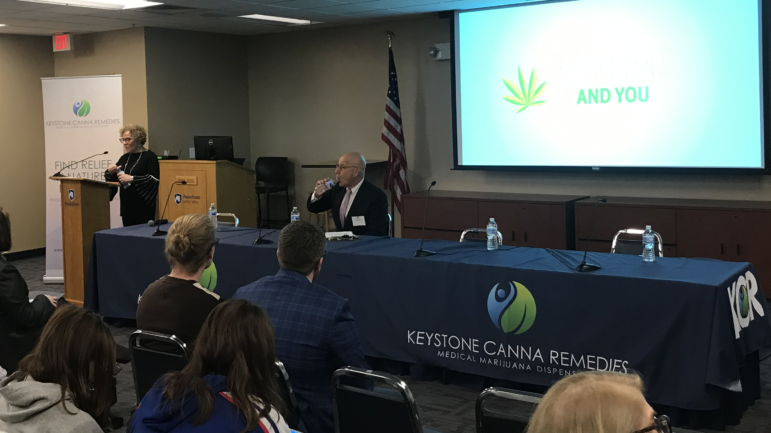 New Jersey however may soon surpass Pennsylvania in terms of the legal availability of marijuana, as its legislature recently decided that voters should have the final say on whether cannabis should be legalized for personal use. A referendum is now set for 2020.

In Pennsylvania one must be diagnosed with at least one of 23 serious conditions in order to be approved for medical marijuana treatment, including:

The law allowing the use of cannabis with a physician’s approval–PA Senate Bill 3–also established an advisory board for the purpose of making recommendations to the health department, which is how medical conditions are added to the list above. The 15-person board is comprised of members of law enforcement, and health and medical experts.

Odumosu has 10 years of experience in the pharmaceutical industry and holds a PhD in biochemistry. He said the use of marijuana to treat many of Pennsylvania’s approved medical conditions was confirmed by a 2016 report by the National Academies of Science, Engineering and Medicine. These include conditions such as chronic pain, anxiety and chemotherapy-induced nausea and vomiting.

Monica Werkheiser of KCR spoke about the clinical aspect of Pennsylvania’s program, which is run.

She said Pennsylvania is one of only five states that utilize on-site medical practitioners in each dispensary. The inclusion of practicing physicians means there is an additional level of care–and safeguards–built in to the program, since doctors can discuss possible drug interactions, match disease states and answering patient-specific medical questions.

“It is great to have that kind of state involvement,” Werkheiser said, “knowing that there is this department making sure you are getting a clean, safe medication, and making sure the facilities are inspected and up to par.”