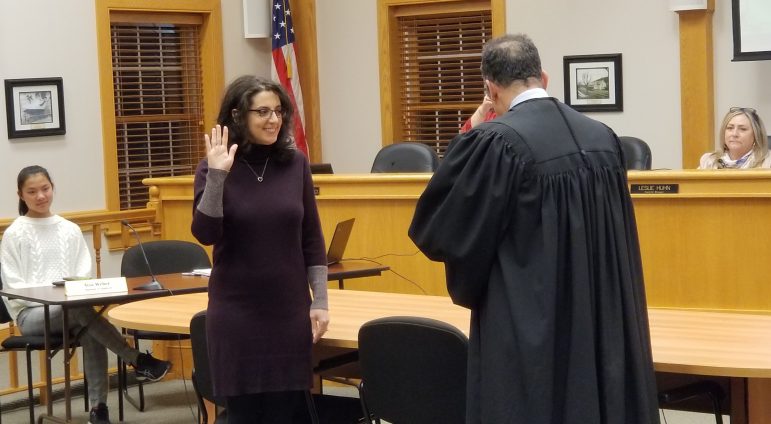 Clarification: An earlier published version of this story incorrectly implied that councilmen Jason Banonis and Tom Carocci collect a salary. Banonis and Carocci do not receive a salary as they have chosen to donate their earnings as council members back to the township’s general fund. We apologize for any confusion our reporting on this matter may have caused.

The newest member of Lower Saucon Township Council was sworn in Wednesday night at what was supposed to be a regular council meeting. Things didn’t go as planned, however, due to the absence of three council members, which meant that the meeting couldn’t be held due to lack of a quorum.

Democrat Kristen Stauffer was administered the oath of office by Northampton County judge Abe Kassis, just hours after a decision was announced in a court case that resulted from council’s inability to appoint someone to fill a vacancy on council.

The vacancy resulted from Stauffer’s husband Ryan’s resignation in November, and council’s inability to fill it was what put the matter in the county court’s hands.

Councilwoman Priscilla deLeon (D) was left to wish Stauffer well and explain why Wednesday’s meeting was not going to happen, which she did with no other councilors present on the dais. 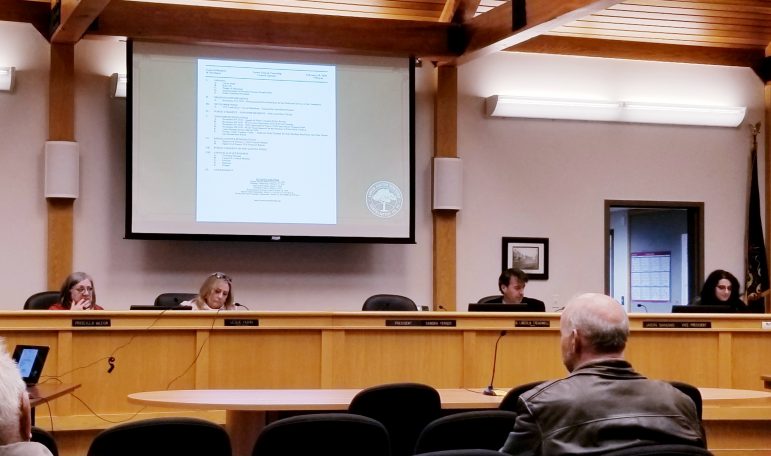 Lower Saucon Township councilwoman Priscilla deLeon was the only council member in attendance at Wednesday’s meeting until newly-appointed councilwoman Kristen Stauffer was sworn in. The meeting still could not be held to a lack of a quorum. Since township council is composed of five members, at least three must be present in order for a meeting to be held. Pictured from left to right are deLeon, township manager Leslie Huhn, township solicitor Linc Treadwell and Stauffer.

She apologized to attendees for the fact that the meeting would not be proceeding as scheduled, and appeared as surprised as most attendees did by that news.

“In the years I’ve been on council this has never happened,” deLeon said.

Banonis, when contacted by email following the meeting, said he was unable to make it due to last minute car trouble.

“I contacted the solicitor (Linc Treadwell) and township manager (Leslie Huhn) prior to 6:30 to report this,” he said. “I fully intended to attend.”

Carocci said he was unable to attend due to a “child care issue” and that he too “notified the township of this prior to the meeting.”

Yerger said in an email that she was not able to attend because of “medical issues,” and that she notified the township “in advance that I would not be able to attend.”

Council’s next meeting is scheduled to be held Wednesday, March 4 at 7 p.m. at Lower Saucon Town Hall.

On Wednesday night’s meeting agenda were township business items related to zoning, council’s public comment policy, grant applications, bids for proposal and public safety. Those items will presumably be carried over to the March 4 agenda.

Stauffer, in a statement to Saucon Source Wednesday, said she is looking forward to serving the residents of the township on council.

“It’s an honor to have been selected for the vacancy and I’m looking forward to representing Lower Saucon residents,” she said. “I’m beyond thankful and grateful for all the support people have given throughout the process–it’s deeply felt and appreciated. I hope to serve everyone in the township to the best of my abilities, and I hope to see many of our residents at council meetings.”