Luzerne County judge Joseph Augello announced his decision Wednesday in an unusual case he heard in which three township residents sought to fill a vacant two-year seat on council.

The judge announced the appointment of Kristen Stauffer (D) to fill a vacancy that was created when her husband–former councilman Ryan Stauffer (D)–resigned for employment reasons in November.

Ryan Stauffer, an attorney, accepted a job with Northampton County, which could have conflicted with his duties as a councilman. His position at the county was also the reason why an out-of-county judge heard the vacancy case that stemmed from his resignation.

“It’s an honor to have been selected for the vacancy and I’m looking forward to representing Lower Saucon residents,” said Kristen Stauffer in a statement Wednesday. “I’m beyond thankful and grateful for all the support people have given throughout the process–it’s deeply felt and appreciated. I hope to serve everyone in the township to the best of my abilities, and I hope to see many of our residents at council meetings.”

Before seeking appointment to council, Kristen Stauffer ran unsuccessfully for a four-year council seat in the November election, after replacing another candidate who bowed out of the race. 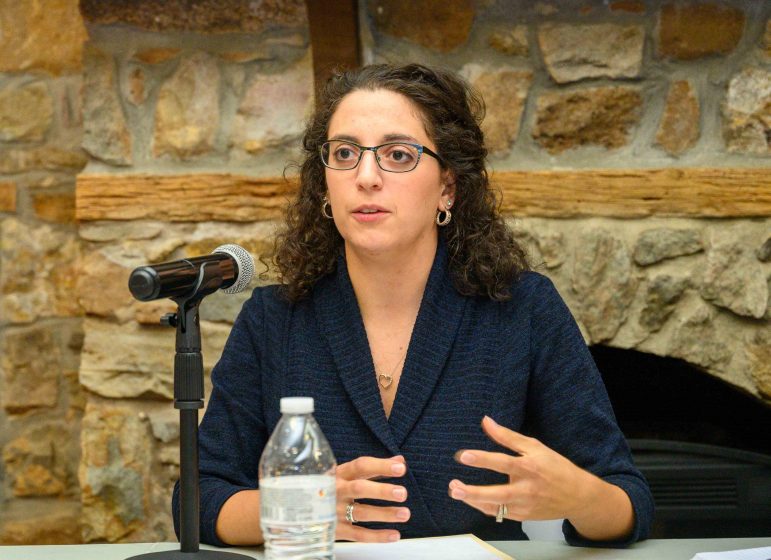 Later, Stauffer was one of three residents who petitioned the court to fill the seat her husband had occupied after council deadlocked 2-2 on two successive nominations at their meeting Dec. 18. One of the nominations was to appoint her to the seat.

Since council was unable to fill the vacancy itself, under the township’s code it was then mandatory that the matter be decided by a court of law.

In an order announcing his decision, Augello noted that Kristen Stauffer had met all of the legal requirements for serving on township council, which include being a township resident for at least one year and being a registered voter.

His decision said, in part:

“Upon review of all the circumstances and it appearing that Kristen A. Stauffer is qualified and prepared to serve as a member of council in the best interest of her community, now, therefore, this 12th day of February, 2020, it is hereby ordered and decreed that Kristen A. Stauffer is appointed member of Council of Lower Saucon Township effective from the date of this Order to serve the unexpired term of Ryan L. Stauffer, and until a successor is sworn into office following an appropriate election thereto.”

Augello also noted in his decision that Stauffer’s petition was signed by 28 township residents and registered voters and was filed on Dec. 23, 2019, which was the first business day following the expiration of the 30-day period in which council could have filled the vacancy itself.

After the 30-day period ended, any township resident who met the legal requirements to serve on council had an opportunity to file a petition with the Northampton County Court of Common Pleas’ civil division requesting appointment to the seat.

Along with Stauffer, former township councilwoman Donna Louder (R) and business owner David Jauregui (I) both filed petitions with the court, and subsequently testified before Augello at a hearing that was held at the courthouse in Easton Feb. 10.

Jauregui did not run for council last year, but cited his service to the township as a member of its Environmental Advisory Council (EAC).

Louder had sought election to a second term on council in November, but came in fourth among six candidates who were vying for three seats.

She cited council achievements during her tenure such as the township’s debt-free status (as of 2019) and her work to try and bring a public market to the shuttered Revolutions at Saucon Valley bowling and entertainment complex in arguing that she was best qualified for the appointment.

Stauffer placed sixth among the candidates in the general election, but argued that her vote total wasn’t reflective of her true potential, since she was essentially a last minute replacement for a candidate who bowed out of the race after winning last year’s primary.

She told Augello that during her two-month campaign, she knocked on approximately 1,000 doors in an effort to hear and better understand the concerns of township residents.

Stauffer–who was represented in her appeal by Easton attorney Theresa Hogan–will now join one other Democrat on council, that being councilwoman Priscilla deLeon, who was re-elected to a ninth term in November.

The other three council members are Republicans: council president Sandra Yerger, who was re-elected in November; council vice president Jason Banonis, who joined council last month and was sworn in to a two-year term; and councilman Tom Carocci, who was appointed to a two-year term at council’s first meeting in January after Banonis chose to fill the two-year seat he had won instead of a four-year seat he had won.

The unusual combination of resignations and appointments means that all three newly-minted Lower Saucon Township Council members–Kristen Stauffer, Jason Banonis and Tom Carocci–are or will be serving abbreviated, two-year terms that end Dec. 31, 2021.

Carocci and Banonis are both attorneys.

Yerger is employed by a Doylestown-based nonprofit, the Heritage Conservancy.

A draft meeting agenda does not list a swearing-in ceremony for Stauffer, however sources say it is likely that she will be sworn in at tonight’s meeting.