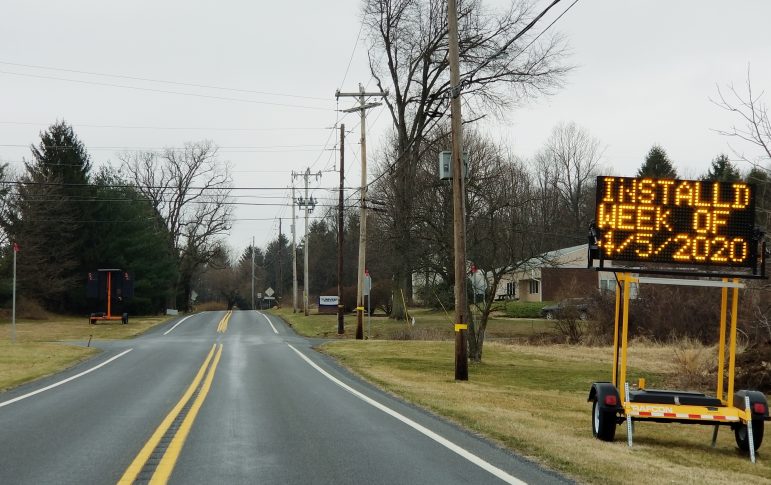 An electronic sign advertises the intstallation of a four-way stop sign at the intersection of Beverly Hills and Chestnut Hill roads in Upper Saucon Township. State law mandates that such signs be used to advise motorists in advance of a change like a new stop sign.

If you have had safety concerns driving through the intersection of Chestnut Hill and Beverly Hills roads in Upper Saucon Township, officials have heard them and are taking action.

A four-way stop sign will be installed at the rural crossing about a mile west of Coopersburg the week of April 5, according to electronic signs that have been positioned near it to help advertise the change.

“I have lived right here for over two years and logged 14-plus car accidents,” said Casey Fragassi, who petitioned the township and then PennDOT for the change from a two-way to a four-way stop.

Fragassi said that after contacting the township’s special projects coordinator, Patrick Leonard, she was encouraged to contact PennDOT officials to request the change.

According to Fragassi, she was then told that there wasn’t a safety concern at the intersection.

Following another accident, she said a neighbor asked police what they could do to help effect change, and they suggested contacting state Rep. Justin Simmons’ (R-131) office.

“I called there and Candice at (Simmons’) office was able to write a letter and get a PennDOT meeting in January,” Fragassi said. “We pleaded our case, and a few weeks ago Patrick at the township called me to say, ‘You win. They are giving you a four-way stop!’

She said the cooperation between officials that led to the decision to install a four-way stop was something to celebrate.

In other road-related news from Upper Saucon, it was announced Thursday that the township has contracted with Barwis Construction to perform road repairs and road construction on Chestnut Hill Road from West Hopewell Road to Lori Court.

The intersection of Lori Court and Chestnut Hill Road is about a mile north of where the stop signs will be installed.

The post stressed that during the paving portion of the project “Chestnut Hill Road will be closed daily, Monday through Friday, between the hours of 7 a.m. and 5 p.m., starting on Monday, March 23 and ending on or about Wednesday, April 8.”

Residents will be able to come and go from their homes during construction but should be aware that they may need to wait for workers to move equipment out of the way.

“Please keep in mind the road closure could last longer than anticipated due to unforeseen circumstances such as weather and equipment breakdowns,” the announcement said. “During the closure, all traffic will be directed to follow posted detour routes utilizing Blue Church Road and Limeport Pike.”

A plan showing the detour route is available on the township’s website.

Motorists should anticipate delays, especially during peak travel times, and use caution driving through the area, according to township officials.