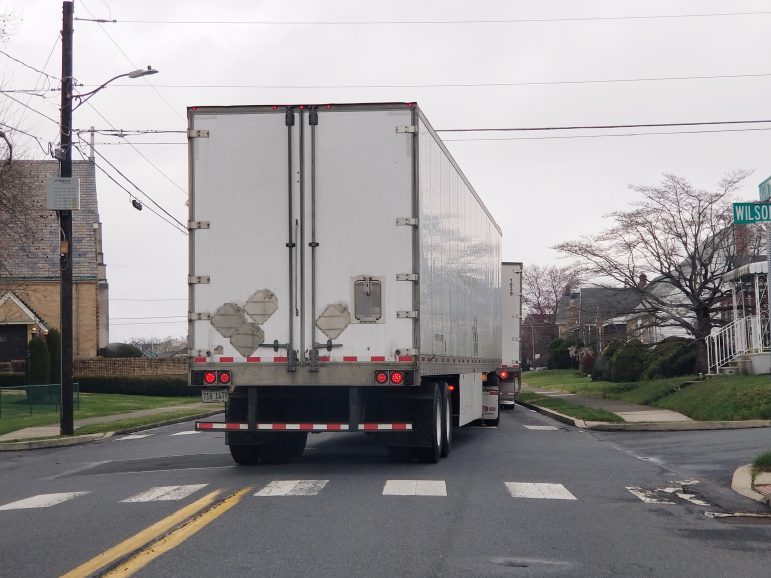 A tractor-trailer bearing an Illinois license plate moves back into the eastbound lane of Easton Road in Hellertown, after trying to drive around a stopped Alabama big rig on Monday.

Although most roads in the area are nearly empty due to the stay-at-home order and business shutdowns in place because of the COVID-19 pandemic, Easton Road in Hellertown borough briefly experienced a mini-traffic jam Monday.

The backup happened shortly after noon, when an apparently disoriented truck driver with an Alabama license plate on his vehicle stopped in the 1300 block of Easton Road near St. Theresa of the Child Jesus church.

The truck driver activated his hazard lights, but didn’t immediately move when traffic began to back up behind him, which it did because it’s not safe to pass in that area.

Nevertheless, after several minutes, impatient drivers began to speed around the line of stopped vehicles–which had grown to include a second tractor-trailer–by driving over the road’s double yellow line.

It wasn’t until the second tractor-trailer attempted to pull that same maneuver that the Alabama truck driver began to pull forward, just as the other truck was starting to pass.

A resident of the 1300 block came out of his home to see what the commotion was and commented that what was occurring is not an unusual sight in the neighborhood.

The resident said the trucks were likely trying to get to an address in the 1300 block of Easton Road in Bethlehem, which is in an industrial park about a mile further down the road.

The man said he’s tried to assist lost truck drivers but the problem continues to reoccur.

The bottleneck ultimately cleared without the need for police intervention, however the tieup could have resulted in an accident on the narrow road, which is also near a school.