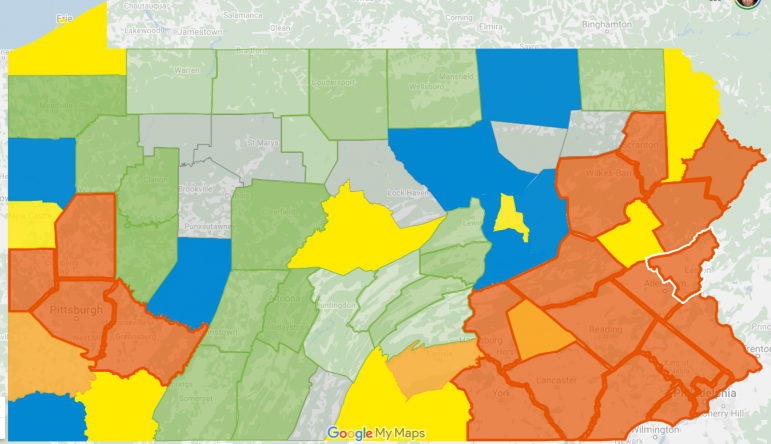 A color-coded map produced by the Pennsylvania Department of Health shows the number of cases of coronavirus by county as of April 1, 2020. The counties shaded in dark orange have the most cases–typically at least 100 or more. As of April 1, Pennsylvania had more than 5,800 confirmed cases in addition to 74 deaths due to the coronavirus.

After reporting the lowest daily percentage increase in confirmed coronavirus cases since tracking began nearly a month ago, the Pennsylvania Department of Health Wednesday issued a COVID-19 update that reversed what some were hoping was a downward trend.

According to the latest statistics, the number of confirmed cases increased by nearly 1,000 overnight to a total of 5,805 statewide. The 962 new cases represented a 19.9 percent increase in the total number of cases.

In Northampton County the total number of cases rose from 245 to 312, which represented a 27.3 percent increase.

A tenth death as a result of the coronavirus was also reported across the two-county area.

As of Monday, Northampton and Lehigh counties had each reported five COVID-19 related deaths to the state.

A total of 620 Pennsylvanians have been hospitalized with coronavirus since March 6.

The statewide death total from the coronavirus increased to 74 on Wednesday. Since there were 63 deaths as of Tuesday, that rise represented a 17.5 percent increase in the total number of deaths.

As of Wednesday, 60 of Pennsylvania’s 67 counties were reporting at least one confirmed case of the coronavirus, and more than 20 counties have had residents die from the disease, according to Department of Health statistics.

Philadelphia has both the greatest number of confirmed cases (1,478) and the highest death total (10).

Montgomery County has the second highest number of confirmed cases, with 649 as of Wednesday.

Both Montgomery County and Monroe County have reported eight deaths from the virus, which is the source of a global pandemic that has significantly disrupted almost all aspects of American life over the past few weeks.

On Tuesday, Gov. Tom Wolf expanded a stay-at-home order he first introduced March 23 to include six more counties: Cameron, Crawford, Forest, Franklin, Lawrence, Lebanon and Somerset. The order currently covers approximately half of the counties in Pennsylvania and has been extended until at least April 30. Click here for a list of allowable reasons for leaving home in stay-at-home counties.

Wolf also announced that all K-12 schools in Pennsylvania are closed until further notice.

Community spread of the virus has been confirmed in parts of the state–including the Lehigh Valley–and there has been increased concern about cases being reported in essential workers on the front lines of the pandemic, such as supermarket employees.

As of Wednesday the United States had the most confirmed cases of COVID-19 in the world, with nearly 200,000 cases being reported by Johns Hopkins University’s global cases map. According to JHU, the number of U.S. deaths has risen to more than 4,300.

While the novel coronavirus can infect anyone, health officials say people 65 and over as well as individuals with underlying health conditions and/or compromised immune systems are at greatest risk of developing complications requiring hospitalization.

The best defense against COVID-19, public health officials continue to say, is frequent handwashing with soap and warm water for at least 20 seconds. In lieu of soap and water, an alcohol-based hand sanitizer is also effective at killing the coronavirus.

Gov. Tom Wolf was scheduled to deliver a live update on the state’s COVID-19 mitigation efforts at 3 p.m. Wednesday. That update will be livestreamed via his Twitter feed.