As people shelter in place to prevent the spread of COVID-19, nature has been given a chance to breathe and reset. However some people, like Kyra Thompson, have been using their free time to give Mother Nature a hand in restoring herself.

Thompson was looking for ways to help make a difference after being furloughed from her place of employment earlier this month. As someone who has been an active volunteer throughout the community for many years, she decided to visit local parks to do some cleaning and trash collecting.

“I pretty much grew up my entire life here in the Lehigh Valley and have always been passionate about not littering and helping out the Earth,” Thompson said.

She posted pictures on Instagram and Facebook of her efforts cleaning up Monocacy Park in Bethlehem and Southeastern Park in Lower Saucon Township, and received overwhelming support. Thompson then decided to give the project a name, LehighValleyTrashPact.

“It didn’t take me long to come up with LehighValleyTrashPact as it fits perfectly for what is trying to be accomplished here,” she said. 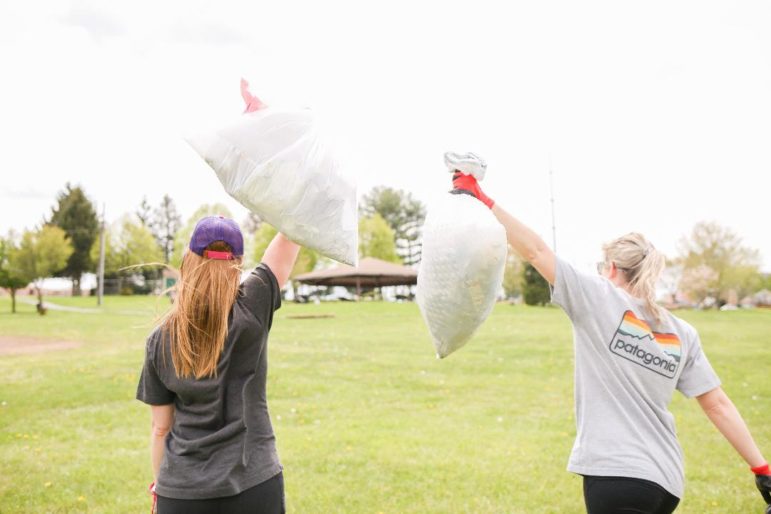 Thompson was dedicated to doing the park cleanups by herself and was simply asking for people to follow and support the project on Instagram and Facebook. She quickly realized, however, that the project was going to be bigger than just her.

“It was maybe a day after I had created everything that I was getting comments, messages and texts from friends, family and local businesses asking what they can do to help out,” Thompson said. “I was blown away with how quickly people were eager to help, and I knew at that moment this was going to be something.”

The next step was to create volunteer signup forms as a way of organizing the people who wish to help. LVTP currently has four different signup forms for Allentown, Bethlehem, Easton/Freemansburg and Hellertown.

The forms include times and locations of various park cleanups, as well as how many volunteer slots are open. There are currently 96 different parks from which volunteers may choose.

The signup links also include tips for volunteers to stay safe while cleaning up, such as reminders to bring trash bags and gloves, to wear appropriate attire and to use the buddy system if necessary.

Thompson asks that volunteers submit pictures of their work, which she then posts to the project’s social media pages while thanking the volunteers for their help.

So far, Thompson and volunteers have cleaned up 11 local parks including Morris J. Dimmick Park in Hellertown, Freemansburg Municipal Park and the Serenity Garden at the Bethlehem Area Public Library.

As the project and volunteer count continue to grow, Thompson hopes to incorporate incentives for those that volunteer, such as LehighValleyTrashPact t-shirts, stickers and pins. Show would also like to be able to provide supplies such as gloves and trash bags to the volunteers that really need them.

Right now, however, she is focused on spreading the word about LVTP and its mission of keeping our parks and communities clean and trash-free.

“I believe that the more we work at this, the less trash we’ll see within the parks,” Thompson said.

“People just have to make the effort, and I really hope they do.”