In response to the death of an African-American man, George Floyd, at the hands of a white Minneapolis police officer who Friday was charged with third-degree murder, Lehigh Valley residents are organizing events to be held in solidarity with other protests against racism and police brutality now occurring around the nation.

At least three events are planned for the weekend; one in each of the Valley’s three biggest cities.

On Saturday, May 30 at 3 p.m. a Stand With Minnesota rally will be held in the Bethlehem Rose Garden at Eighth Avenue and Union Boulevard in Bethlehem.

According to a flyer that’s being circulated on social media, the purpose of the event is to help “create change by utilizing the power of your voice and standing with the Black Lives Matter movement.”

“Come join us in the fight for justice,” the flyer says. “It’s time for the Lehigh Valley to stand in solidarity for Black Americans, George Floyd and countless others.”

Social distancing will be practiced and face masks should be worn, the flyer states.

As of late Friday evening, more than 160 people had responded “going” and nearly 500 “interested in a Facebook event created for the rally.

In Allentown on Saturday, there will be a “March for Justice” peaceful protest against police brutality from 6 to 8 p.m. at 7th and Hamilton streets, according to a flyer. 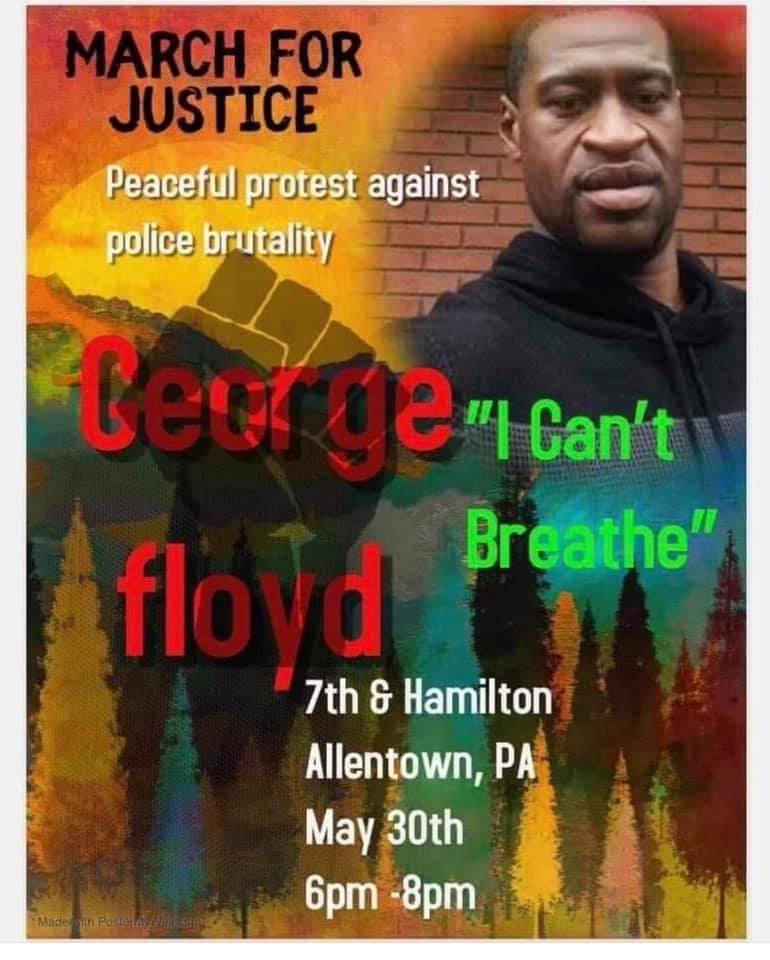 This flyer was made to advertise a March for Justice peaceful protest against brutality in Allentown Saturday. The protest was inspired by the death of George Floyd in Minnesota; a killing that has unleashed waves of civil unrest across the nation in the past few days.

According to a Facebook post by Justan Parker, the protest is in support of minorities and against police brutality.

Social distancing will be practiced and masks should be worn, according to Parker’s post.

Finally, in Easton there will be a rally downtown on Sunday, May 31 from noon to 2 p.m.

The protest is “in solidarity, support and social distancing for George Floyd and countless other black men and women who have lost their lives due to racism in America,” according to a Facebook post advertising it.

A line of people will start at Centre Square, with the goal of it extending across Northampton and Third streets, the post says.

Social distancing guidelines will be followed and face masks should be worn.