The shock waves that have reverberated outward from Minneapolis following the death of an African-American man named George Floyd at the hands of a white police officer May 25 reached the Lehigh Valley Saturday in the form of a large protest in Bethlehem.

The Black Lives Matter gathering in the city’s Rose Garden at Eighth Avenue and Broad Street attracted a diverse crowd of hundreds, who then marched down Broad and New streets to Bethlehem City Hall before returning to the park for an organizer-led rally.

The protest attracted a diverse group of demonstrators, some of whom carried signs that sought to dispel the idea that Americans who are demanding change are monolothic.

For example, a man in military fatigues held up a sign that read “I’m in the National Guard and I’m marching with the people!” Other signs displayed messages such as “Stand with Minnesota” and “Silence Equals Violence.”

There was no tangible police presence at either the march or in the park, although there were several city officers who directed traffic near the Rose Garden, at Eighth and Broad.

Organizers of the march exhorted the attendees–most of whom wore face masks due to the coronavirus pandemic–to demand change by exercising their right to vote in Pennsylvania’s upcoming primary as well as future elections.

Throughout the march and protest, protesters frequently chanted “Black Lives Matter,” “No Justice, No Peace” and some statements that were politically-motivated and defiant in nature, such as “F— Donald Trump” and “F— the Police.” Other rallying cries that have been heard across America since George Floyd’s killing were shouted, including “Hands Up! Don’t Shoot!” and “I Can’t Breathe,” which is a reference to what Floyd said as he lay prostrate on the pavement of a Minneapolis street, his neck pinned under Ofc. Derek Chauvin’s knee.

This is the scene now at Payrow Plaza in Bethlehem where a diverse crowd of hundreds is rallying and chanting to end police violence against minorities and for justice for George Floyd, who authorities in MN say was killed by a police officer. #BLM #GeorgeFloyd #BLM #racism #BlackLivesMatter #Protest #Bethlehem

A video recorded by an eyewitness documents that Chauvin knelt on Floyd’s kneck for nearly eight minutes.

Anger by minorities and their allies at the video has unleashed a wave of civil unrest in many major U.S. cities, which in some places has led to rioting and looting.

Chauvin has been charged with third-degree murder as well as second-degree manslaughter, and some protesters in Bethlehem shouted that those charges aren’t serious enough.

Another chant that was frequently heard at the event was “Say Their Names!” Organizer  Ashleigh Strange replied to the crowd when she read a fraction of the names of the more than 1,100 Americans she said were killed by police in 2019, as hundreds knelt on the ground in front of the bandshell with fists raised in solidarity.

Other local events to protest Floyd’s killing and racism in America were planned in Allentown and Easton this weekend.

Please Note: Some of the images below contain offensive language. Reader discretion is advised. 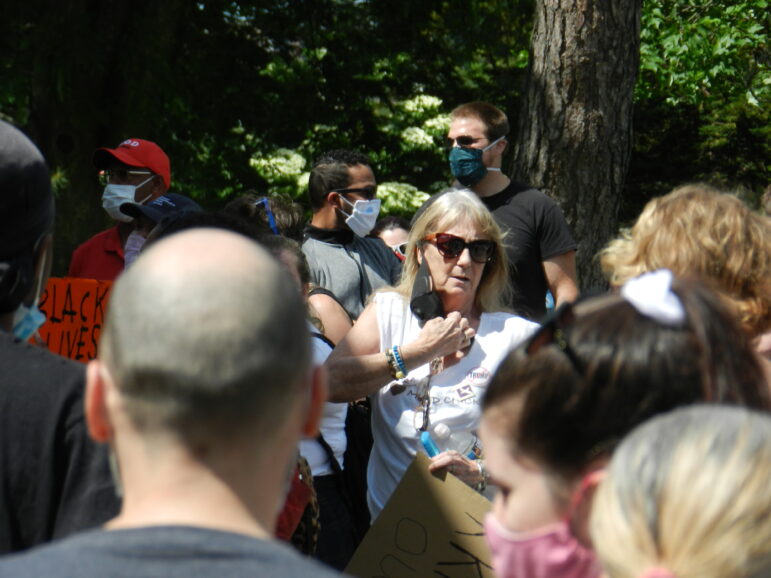