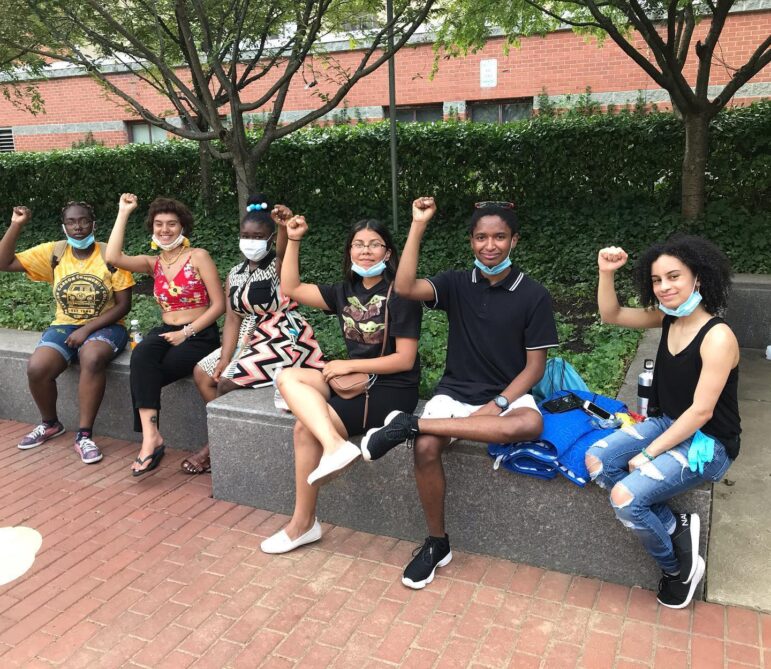 Student speakers raise their fists in solidarity at the Lehigh Valley Stands Up event held in Allentown.

With recent calls by activist groups around the nation to reform and reimagine policing, the presence of law enforcement officers in public schools has become a hot topic.

An event which focused on that issue was held Tuesday at the Arts Park at 5th and Hamilton streets in Allentown. Organized by Nasheera Brown, a junior at Dieruff High School in Allentown, and Ashleigh Strange, Regional Organizer at Lehigh Valley Stands Up, “Let’s Talk About Cops in School” featured several speakers, most of whom are current students at or recent graduates of Allentown schools.

Brown kicked off the lineup of youth speakers.

“I believe we can find a way to be safe in school and learn,” she said, as she described her experience thus far in Allentown schools. “I like one of my officers, Officer Perez… he knows how to mentor us and speak to us,” she said in support of some LEOs and security officials in schools, but she also expressed concerns about how others have performed their jobs. She recounted specific examples of what she said was questionable treatment, such as witnessing a peer being tased at an Allentown Central Catholic basketball game.

Brown said she was “very grateful” that Strange asked her to share her experiences with the community, and when Brown spoke again later in the program, she praised several teachers who have taken the time to mentor her and her peers.

Michelle Wilson, a graduate of Building 21, a “non-selective, competency-based high school in the Allentown School District,” said her experiences with police have been “scary.” She recalled an incident in which she said she was racially profiled and harassed because she “fit the description” for a juvenile for whom the police were looking. She also remembered the general relationship between students and teachers at her school as being confrontational.

Emily Cintron, a 2020 graduate of Allen High School and now a registered medical assistant who attended New York City schools until the past school year, spoke at length, comparing her experiences in her previous schools to those at Allen. She said there were only two security guards in her previous school who “didn’t even have weapons. If there was a fight, it was once in a blue moon…” 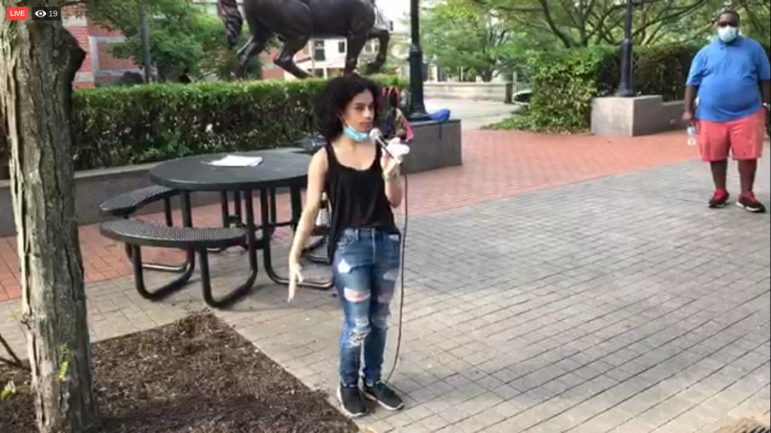 Emily Cintron speaks on her experiences as a student at Allen High School.

“Even if it did happen, it was never in school,” she said, recalling the environment as being “predominantly (made up of) people of color…a safe space.”

“It was chill, we were fine,” she said, adding that deans and academic advisors would typically mediate issues between students.

In comparison, Cintron recalled an incident during her first week as a new student at Allen when she said she was “thrown out the door” by a school security guard because he assumed she was a freshman skipping class.

“I was just lost, it was my first week in a two level school,” she recalled, adding that the security guard “didn’t ask to see my ID or anything… All the security guards are (looking) to immediately resort to is violence.”

In her prior school, Cintron said her advisor would sit down to speak with her for an hour nearly every day. At Allen, however, she said she spoke to an advisor only once during the entire year.

Cintron said she understands why people believe security guards will keep schools safe, but that “when it comes to the point where a student needs help emotionally and the first thing they get is a cop, that’s not okay.”

She reminded the crowd that even though she and her peers wanted to “act like adults… We’re still kids at the end of the day.”

“Want kids to trust cops?” Cintron asked. “Put good cops in the system. Train them on how to de-escalate violent situations. There should be more counselors than cops.”

Anthony Hanna, a rising senior at Allen, spoke briefly and echoed a developing theme among speakers of the desire to replace some, but not all, police officers and security guards with professionals who might be better trained on how to deal with the emotional needs of students.

“Two years ago with all the school shootings, we wanted cops,” he said. “Now, we want to get rid of them.” He spoke of the need to balance safety with other issues facing students today, saying “we need a middle ground… More violence just creates more violence.”

“They’re probably 23, I’m 16 at the time,” she said of the officers, who she described treating students as peers rather than children. She also recalled an incident in which she said a student picked a fight with a security officer, in which the officer “took the student up on the challenge” instead of acting to de-escalate the situation.

For Saavedra-Mozo, the educational environment at Dieruff felt loud and uncomfortable from the moment each school day began.

She said faculty members would crowd the middle of the halls just after 8 a.m. and use a megaphone to warn students to “get to your class or you’ll get ATS (in-school suspension)!”

Regarding the Allentown community, which includes a significant Latinx population, Saavedra-Mozo said a “huge language barrier” in the city’s schools isn’t helping things.

“(There are) only a few guidance counselors who even speak Spanish for our parents,” she said. “It’s not a student’s job to translate.”

She mentioned a troubling trend involving social media activity from teachers and other faculty in the district.

“I see what they are posting on Facebook, saying that the (Black Lives Matter) protests are stupid,” she stated. “(There are) so many teachers who are racist and homophobic and now they’re getting mad.”

Two speakers of color spoke of their privilege from being lighter-skinned than many of their peers.

Serena (no last name provided), a recent Dieruff graduate, said she “definitely noticed this favoritism… I’m a lighter-skinned woman, (so) I hear ‘you talk so well…’ Teachers should not be separating their students… because they don’t speak a certain way.”

Tonya Morrow, a self-described “very light-skinned woman of color” and a graduate of Allen more than 20 years ago, said “systemic racism has only gotten bigger…with the population boom.” She also said she believes the Ku Klux Klan was active “only 20 minutes away (from Allentown)” when she was in high school in the late 1990s.

At the conclusion of the meeting, both Brown and Strange thanked attendees for showing up on the hot and humid evening, passing around a sign-in sheet as they did so.

Strange said the organization would provide Allentown School Board member email addresses to signees and encouraged attendees to email them about the issues discussed.