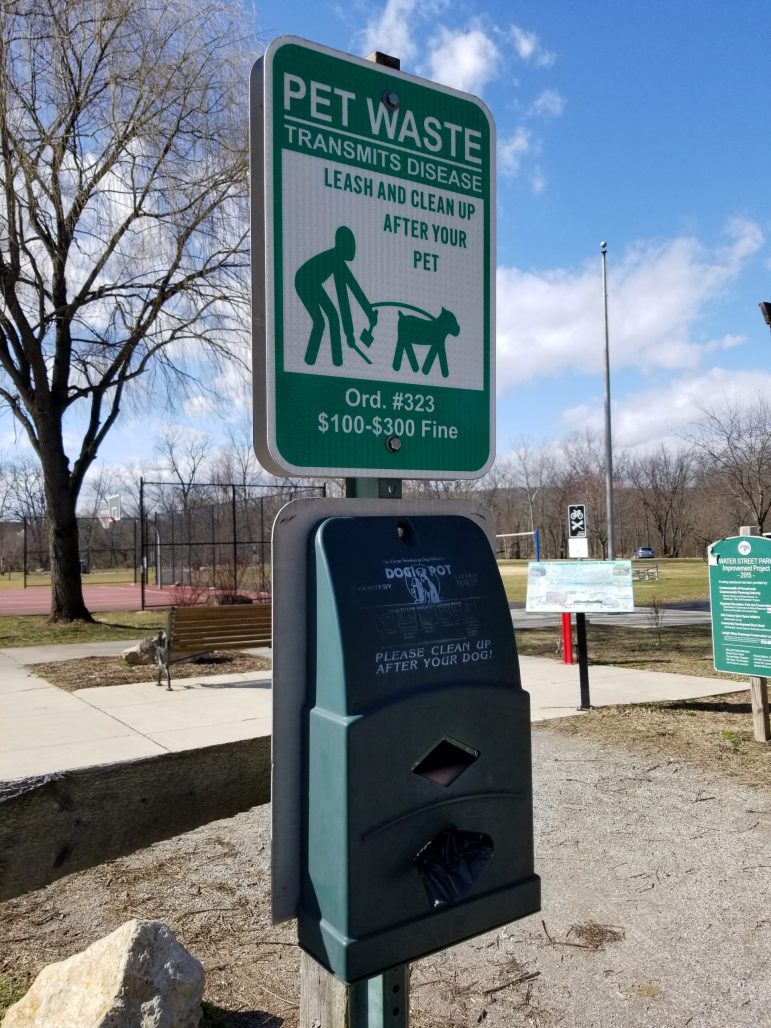 A sign and “Dogi-Pot” disposable bag kiosk are located next to the Saucon Rail Trail in Hellertown’s Water Street Park. A garbage can is also located there, in which bagged dog waste may be placed. (FILE PHOTO)

Today, June 29, I noticed a new sign along the Saucon Rail Trail. It tells visitors to call the Northampton County Non-emergency number, 610-759-2200, if they observe anyone
littering or not cleaning up their dogs’ waste. Well, I’ve been there and have done this many times with a quick response from Hellertown Police, especially to Water Street Park.

One problem exists and it’s a big one. The caller must have a photo of the offender in action if he contests one’s observation.

For 15 years and especially during the last year, I have been picking up all refuse, including dog crap, from Water Street to Bachman Street; however, I have not been quick enough to catch the acts on film. Nevertheless, I have reported all vandalism.

Now I quit, retire, give up, cave in or relinquish this volunteer activity due to phone deafness and poor balance. I am finished falling down while bending over and can hear nothing using my cell phone. Meniere’s disease sucks.

Today, being a Monday, the trail had been trashed as usual. Water Street Park was disgusting, especially the Pig Pen, otherwise known as the basketball court. Players do not maintain social distancing and drop their litter throughout, at times one pace away
from the trash or recycling receptacles. My suggestion is to close the court, as before by removing access to the hoops. The players deserve no respect.

Bikers who fail to dismount at Water Street deserve no respect.

Note: Letters to the editor concerning timely subjects of local interest may be submitted to josh@sauconsource.com for consideration for publication. Letters must be signed to be considered.